In addition to being investigated by the the state’s AG, the FBI, and the Brooklyn US Attorney’s Office, the DOJ is also reportedly investigating Cuomo. 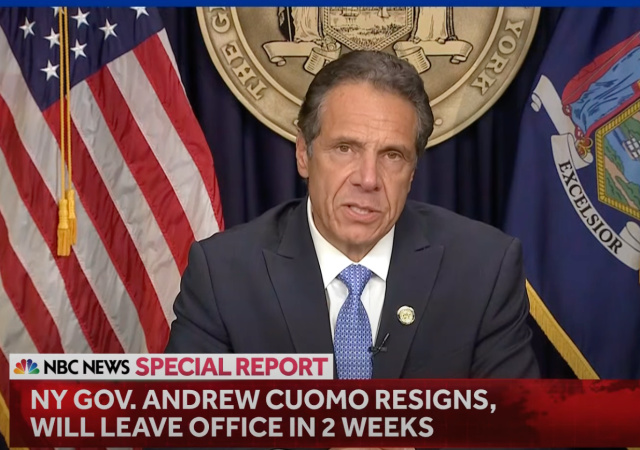 Disgraced New York Governor Andrew Cuomo was ordered by New York’s Joint Commission on Public Ethics to pay back $5.1 million in book profits Cuomo raked in while the pandemic raged through his state.

The extraordinary resolution was approved by the Joint Commission on Public Ethics in a 12-1 vote — a month after the ethics agency voted to revoke its prior approval allowing Cuomo to earn outside income from his book “American Crisis: Leadership Lessons from the COVID-19 Pandemic” while he was still governor and New York was in the throes of the deadly coronavirus outbreak.

JCOPE rescinded its approval after concluding that Cuomo violated pledges not to use state resources or government staffers to prepare the book. He must pay the money to the state by next month.

The resolution, drafted by commissioner David McNamara, a Senate Republican appointee, said Cuomo now “lacked the legal authority to engage in outside activity and receive compensation in regard to the book” since JCOPE rescinded its approval.

“Gov. Cuomo is not legally entitled to retain compensation … for any form of outside activity related to the book,” McNamara said.

The panel found Cuomo’s book proceeds should be turned over to state Attorney General Letitia James — whose office’s investigative report forced the three-term Democrat’s resignation after substantiating a slew of accusations of mistreatment and harassment leveled against the disgraced ex-governor by current and former staffers.

“It is ordered that by no later than 30 days from the date of this resolution, Gov. Cuomo pay over to the attorney general of the State of New York an amount equal to the compensation paid to him for his outside activities related to the book,” the resolution says.

James would determine to whom the profits would be distributed.

Cuomo’s book deal also is being investigated by James, the FBI, and the Brooklyn US Attorney’s Office. The state Assembly Judiciary Committee’s impeachment report found that Cuomo used staffers extensively to help prepare the book — though he insisted the work was done voluntarily and legally.

Cuomo’s team was also accused of low-balling coronavirus-related nursing home deaths while he negotiated the book deal, leading to accusations he was trying to look better to make a quick buck off the tragedy.

Cuomo’s legal team claims JCOPE hasn’t the legal authority to make such a demand and promised to take the matter to court, should the state attempt to enforce the resolution.

In addition to being investigated by the the state’s AG, the FBI, and the Brooklyn US Attorney’s Office, the DOJ is also reportedly investigating Cuomo.

That sound you hear playing in the background is the world’s tiniest violin.

For our extensive coverage on the Cuomo disgrace, see here.

So Cuomo really pissed off the deep state. Can I buy a life insurance policy on him? Oh, wait…those do not pay for “suicides.”

They do if the insured makes it past the two year exclusion period. Perhaps not a good bet in this particular case?

It is all a byproduct of TDS. They hated Trump so much they were willing to stand up a man whose decisions directly caused more Covid deaths than any other person outside of China, as a shining light of leadership in the pandemic.

Sweet justice. Now let’s have some arrests of the swamp critters.

Either the publishers are really bad at their job, or some of that got run through the DNC Laundromat first

This cretin is a distraction. For more important news: did you know Schumer is on Putin’s payroll?

Schumer, along with a number of other top Democrats, is a beneficiary of campaign contributions from top Democrat fundraiser Vincent Roberti whose lobbying firm was paid over $8.5 million by Nord Stream 2 which is owned by Putin’s state-run Gazprom energy monopoly.

Roberti, a former Dem politician, has maxed out his donations to Schumer and to Rep. Eric Swalwell, who may have been cheating on Fang Fang with Vladimir, and threw in a generous $171,000 to the DCCC, as part of the over $545,000 donated to the Democrat political machine:
https://citizenfreepress.com/breaking/schumer-is-getting-paid-by-putin/

Well, how are you going to be “the product” unless someone sells you?
Or sells you out?

A $5 million advance for any book that doesn’t have ‘Potter’ in the title is nothing more than a blatant political bribe. This jackass’ book was never going to make $1 million in profit, forget $5 million.

Book advances are a JOKE at this point and nothing more than a way for them to ‘legally’ bribe politicians.

Book advances for any current or former politician should be outright illegal, or REQUIRE them to pay back the full amount with interest if the book profit doesn’t cover the advance.

Reading the source story, the state’s Public Ethics Commission approved allowing Cuomo to earn money from the book, then revoked that approval a month later. As part of that revocation, it ordered him to turn over any money he’d been paid to the state because he allegedly used state resources and staffers to prepare the book. He’s not repaying or returning anything to the publisher, as implied by the title, the State is just taking it from him. It would be interesting to see how that lawsuit would shake out, eh?

This will be an interesting lawsuit

“He’s not repaying or returning anything to the publisher, as implied by the title, the State is just taking it from him.”

I hope the lawyers and state bankrupt him. Like the dems did to Trumps people.

Speaking of corrupt pieces of sh*t, McConnell is finally in the crosshairs:

McConnell “truly the most corrupt politician in the U.S.”
https://www.republicreport.org/2020/video-mitch-mcconnell-truly-the-most-corrupt-politician-in-the-u-s/

I saw this. I think it’s a mistake to replace McConnell without a clear view of who would take his place and assurances that this person would hold firm on keeping the Senate filibuster.

Agree. The deep state will attempt to install somebody even more corrupt and controllable.

I wondered for years watching him why NO ONE SMELLED A RAT? At 80+ I guess I’ll finally see what if anything is exposed about him and his wife and her father. Good Luck, Keep Digging

“I have altered the deal. Pray I do not alter it further.”

Poor Democrat: live by changing the rules arbitrarily to get what you want, die from someone on “your side” doing it to you.

All us owners of “BATF-guaranteed-legal” bumpstocks who had to surrender their “contraband” property for zero compensation shed a little tear for you, Andy.

That’s not how it went. He was given permission to earn this outside income, on the explicit understanding that he was not using state resources for it. He broke that understanding, so now the money belongs to the state.

Let’s see what if anything develops from the investigation into Cuomo’s distortion of the numbers nursing home deaths. You can bet that Cuomo will never be investigated for his abuse of power in locking the state down, suppressing free exercise of religion and failing to send the National Guard to NYC during the riots that ensued after the death of Floyd while resisting arrest