The DOJ is already investigating Cuomo over his memoir and policies that led to the deaths of so many elderly people in nursing homes. 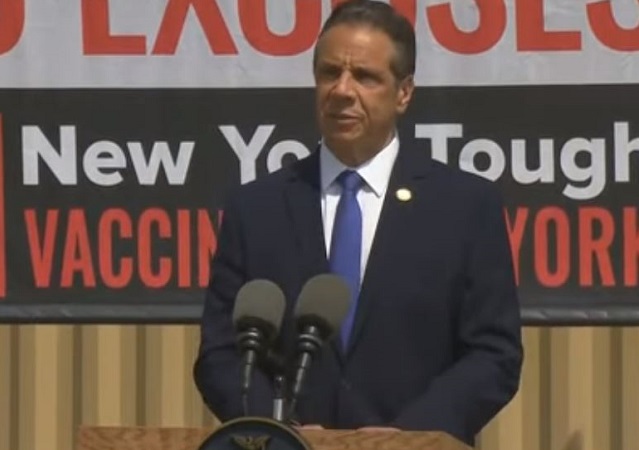 The Department of Justice opened an investigation into former New York Gov. Andrew Cuomo and his executive chamber right before he left office in August.

Lawyers working for the U.S. Attorney for the Eastern District of New York’s Civil Division sent a letter to state officials before Mr. Cuomo left office in August that said they were examining employment policies in the executive chamber, according to people who reviewed the letter. The executive chamber includes the governor and his or her top aides and advisers.

A spokesman for the Eastern District declined to comment.

An inquiry by New York State Attorney General Letitia James’s office found he “inappropriately touched and made comments about 11 women, including current and former state employees.”

Cuomo’s spokesperson, Rich Azzopardi, said that they knew about the investigation beginning in August “based upon the AG’s politically motivated sham report and we have heard nothing since.”

The Eastern District office already started investigating Cuomo’s memoir, American Crisis: Leadership Lessons from the Covid-19 Pandemic, and his policies that led to the deaths of elderly people in nursing homes.

James’s office also has an investigation into the memoir. Her investigation concentrates on the usage of state resources to produce it:

Ms. James’s office is also investigating the potential misuse of state resources to produce the book. A state ethics board approved Mr. Cuomo’s $5.1 million publishing contract with several conditions, including that, “No State property, personnel or other resources may be utilized for activities associated with the book.”

A report released last week by a New York State Assembly committee conducting an impeachment investigation of Mr. Cuomo’s conduct found multiple instances where aides to the governor edited the volume and communicated with the publisher.

Mr. Azzopardi has said any use of state resources for the book—like a printer—was incidental. He added that some public employees volunteered their time to help write and edit the memoir.

Democrat on a Democrat violence. She wants his old. Job and is making sure there is no comeback.

Remember. This piece of shit caused the deaths of THOUSANDS of seniors and sexually assaulted over 10 women over his career.

And this was the guy that literally everybody in the media was slobbering his knob because he was going to Get Trump.

Dems were pitching this disgusting, vile reprobate for PRESIDENT. I kid you not. And this was in my word search game chat. It was insane. They built up a literal granny-killer and alleged sexual predator as a person to run against President Trump in 2020.

Democrats have no grounding principles, no nothing. They are political hacks who care only about power. And once in power are fine enacting the “literally Hitler, totalitarian, racist, every ism, fascist” policies they rejected under Trump. This is not hypocrisy, that’s an insult to hypocrites the world over; this is naked, jaded, cynical power grabbing. It’s vile and anti-/unAmerican. And it must be stopped.

Well, Avenatti didn’t step up, and Weinstein got sidetracked before the lawn signs were dry.

Ha! Avenetti was a clown show from the word go (kind of like the way the media builds up absolute losers like Stacy Abrams, Pete Whatsizname, and weirdly Cackling Kamala. Democrats hate these people before the rest of us even get a chance.).

Weinstein, like Al Frankin, was supposed to be the sacrifice to the altar of woke on their march to destroy President Trump. When that didn’t work, the whole #MeToo movement was purposefully stopped by the powers that be. It’s sole purpose was to take down Trump., and when it became clear that wasn’t happening, the #MeToo freaks stopped caring about #MeToo . . . well, really, “they” never actually cared. The whole #MeToo movement was intended to destroy a duly-elected sitting president, so it’s no surprise at all, that is why we never hear about it today. It was never ever real. It was a (failed) political stunt. Period.

Once it became clear that the only people going down on that politically-motivated schtick were lefties, they dropped it like a hot potato. This is easy to do when you don’t give a crap about the cause and only care about subverting the reelection of a president who was as hopelessly and deeply unpopular as Hillary Clinton.

The disappearance of #MeToo is beyond telling about its motives and goals. Any fool who bought into that crap as an actual movement for change has probably already red-pilled. How could they not when they saw that ludicrous fakery aimed at taking down Trump, willing to take down anyone who happened to be in the way, and still yielded nothing in political terms. Get Trump cost a lot of people their careers, and hilariously, they think they died on the cross for a good cause. What maroons.

I would contest the idea of #Me To as a failure.

It left the building after Trump did showing the motives but I would argue that it shifted enough people to call it a success.

You could argue it was a Pyrrhic victory because it has unified every type of Republican against a corrupt media (although that was arguably inevitable).

I’m not sure I follow your point here, Danny. What did #MeToo have to do with 2012? Years before it hit the scene? And what did it have to do even with 2020? Though it is very clear that a great many people disliked Trump but liked his policies, I suppose #MeToo could have been a factor wrapped up in the visceral hatred of Trump, but #MeToo didn’t hurt Trump directly (which, I contend,, is why it was dropped so fast).

Well, they DID run a pedophile in Biden, so it’s not like their taste really improved.

I have mentioned Fran. She died in a Suffolk County nursing home. Alone. I consider Cuomo a murderer.

In an administration where the DOJ was not a notorious clown car, this might be an interesting turn of events.