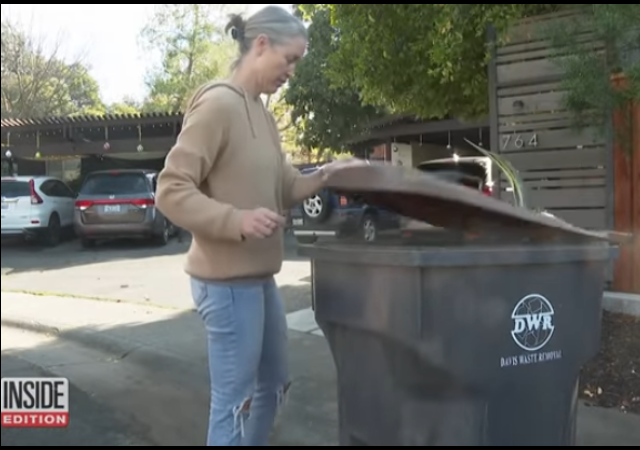 California is experiencing a disturbing wave of flash mob robberies, a cargo ship crisis, and is tied with Nevada for the highest unemployment in the country.

However, what do our politicos squander time trying to control? Food waste.

The effort is designed to keep landfills in the most populous U.S. state clear of food waste that damages the atmosphere as it decays. When food scraps and other organic materials break down they emit methane, a greenhouse gas more potent and damaging in the short-term than carbon emissions from fossil fuels.

To avoid those emissions, California plans to start converting residents’ food waste into compost or energy, becoming the second state in the U.S. to do so after Vermont launched a similar program last year.

Carbon dioxide is a life-sustaining gas required by plants. Millions of acres of plants rot globally each year. Natural decay has occurred since the first life bloomed on this planet.

No amount of science excuses this ridiculous mandate. So, of course, the bureaucrats are rushing to pat themselves on the back for this new rule.

Most people in California will be required to toss excess food into green waste bins rather than the trash. Municipalities will then turn the food waste into compost or use it to create biogas, an energy source that is similar to natural gas.

“This is the biggest change to trash since recycling started in the 1980s,” said Rachel Wagoner, director of the California Department of Resources Recycling and Recovery.

She added that it “is the single easiest and fastest thing that every single person can do to affect climate change.”

And as Californians are forced to endure the micromanaging of their home wastes, flash mob robbers hit a gun store in the Los Angeles area.

Crooks made off with nearly 40 firearms during a smash-and-grab burglary at a California gun shop early Thursday morning, a report said.

The suspects shattered the front door glass at Whitten Sales just after midnight and stole the guns that were kept in a safe at the store, the Los Angeles Times reported, citing Garden Grove Police Lt. Mario Martinez.

The owner of the business tipped off police to the burglar after seeing a suspect on surveillance footage, the report said.

By the time police arrived, the thieves were gone. Police said they fled in two BMWs.

I am sure the thieves will be sure to toss their banana peels into green waste bins….and then all will be right with the world.

“The suspects shattered the front door glass at Whitten Sales just after midnight and stole the guns that were kept in a safe at the store, the Los Angeles Times reported, citing Garden Grove Police Lt. Mario Martinez.“

Not much of a safe….

My guess is this was an inside job.

Next up on the 11:00 news… “Rat problem at historic highs. Local governments begged to do something.”

Just in passing, I have a BBC special on PBS right now. It is discussing underground London and it talking about the plague pits they uncovered. Hmm. Lots of food in composting depots and city collection points. Rats. Cities filled with homeless, druggies, mentally ill, etc. none of which are known for hygiene and/or avoidance of fleas and ticks. Does the name yersinia pestis strike a familiar note? All around the Bay Area, Sacramento, Greater Metro LA.

Something to watch from a distance.

yersinia pestis (formerly Pasteurella pestis) is a gram-negative, non-motile, coccobacillus bacterium without spores that is …

I stayed in the Four Seasons hotel in the middle of t`he CBD some years ago, a splendid place with the finest restaurants; rode the tram, wandered about Fisherman’s Wharf, toured Alcatraz and experienced US exceptionalism in the innovative and professional manner in which you presented it – loved the place (Sydney, Australia is much the same).

After seeing reports of what the anarchists and hobos and idle junkies have done to the city in recent years I never want to go back again.

For reals one of the big reasons I couldn’t wait to move out of the Bay Area was the worsening rat problem. (OK, politics too, but I repeat myself.) I was a Master Gardener, meticulously cared for my garden and I couldn’t get on top of the number of rats coming in my yard. I actually was worried about disease exposure. Every strategy I employed against rats was ineffective. I noticed an increase in rodents coinciding with the increase of homeless encampments near my neighborhood. The rails on top of the yard fences were roadways for rodents. I gave up on composting because rats liked to live in it.

Plumbers are about to get real busy taking care of busted garbage disposals.

That’s because people who live in projects pour their cooking oil down the drain.

Glass breaking, alarms ringing: How did they get into the safe??

Probably too few police (due to defunding) to respond to the alarms, giving the looters lots of time to break into the safe.

Curious how breaking into a safe is a smash and grab…. really shitty safe?

I dunno, it’s a crazy thought, but maybe stop wasting money should be a higher priority than stop wastng food.

What happens when they decide that people over age 60 emit more carbon than their worth. I guess we’re toast then. And the politicos will be able to pat themselves on the back for saving the planet and signal their virtue for making a dent in climate change. Insanity is winning. We’re doomed.

Not toast, per se; soylent green. Or in my case, soylent brown.

Your only hope is to become a politician. If that were ever become a policy no doubt they would exempt themselves.

Keep in mind that Final Solutions are inherent in all collectivist tyrannies.

Leftism’s logical conclusio is ALWAYS genocide. Don’t think they’re not dreaming of it:

“We continue to fight the Civil War. Democrats will have to use all their power to hold our Country together.”
https://www.breitbart.com/entertainment/2021/04/13/rob-reiner-republicans-stand-for-nothing-except-white-nationalism/

People on Social Security already have a negative worth to the state, carbon or no carbon.

Why do you think Cuomo made sure to kill as many elderly as possible? SocSec, Medicare, pensions: savings on all of them.

What could go wrong

Mandatory compost? No. I use food scrap to create compost for my garden but that’s my choice. I suppose the busy bee tyrannical types are afraid to offer this as an alternative; folks might get the idea that they should have choices in their life.

I fully expect to see either a banning of home compost piles, or the need for a permit,

I also foresee a ban on garbage disposal units.

Why haven’t they banned those evil petroleum-based plastic trash cans.

Between the horses, pigs, the chickens, and the garden, we have zero food waste, including coffee grounds and egg shells. If we had pigs, we could even dispose of government agents.

I’m sorry, there’s no edit function and I’m sure that thinko was confusing. The first “pigs” should’ve been “horses.”

Got it this time!

Dogs and horses and chickens oh my?

Lions and Tigers and Bears! I’m being cereal here.

<blockquoteI am sure the thieves will be sure to toss their banana peels into green waste bins….and then all will be right with the world.

No problemo! A few more years under the Biden* junta, and people will be EATING the waste they used to throw out just to survive. Problem solved!

Famine is a swell way to lose weight FAST!!

Watching Democrats artistically ruin a state while they attempt to govern it is like watching an Ethiopian podcast of Pimp My Jalopy.

I see a golden opportunity for steep fines. First it will be a composting bin. Then it will be separate vegetable matter from animal better. When the chicken bone inside the vegetable one, and I’ll write you a $500 fine. Ask any Britt that made the mistake of putting a brown bottle in with the green glass.

Pour bear urine in it and double your fine.

Or eliminate it entirely – who can predict?

Yeah, but then where would you pee?

It goes without saying: Bear urine must be from a friendly bear!!!

I remember an identical exposé in New England.

B-b-b-but what about Warren Buffet and Fortistar?

I have no problem with trying to create energy from waste in the form of methane biogas.

I have a problem with the mandate crap.

Also, there’s an easier way to do this and it’s with honey instead of vinegar.

The people pushing this plan want to make biomethane more cost-competitive by consolidating the types of organic waste that produce premium off-gases. It makes perfect sense to do this. Currently, most landfills already have gas collection systems but the gas is diluted by other waste gases from other types of trash. Concentrating the gas by better sorting prior to disposal and incubation will cut the cost of biomethane production considerably.

However, the totalitarians like Newsom would rather throw out a mandate which will lead to only partial adoption, fractured factions that fight (see the vaccine and masks), and rebellion on principle. Incentivizing consumers to consolidate this organic waste with some kind of program would be a much better approach, but for some reason (ahem progressive dictatorship), that’s not even in the cards here.

I’m sure the gun thieves raced back the next day to get the firearms legally transferred with the California DOJ per federal and state law ………… NOT.

Who, but Hollywood idiots, would come with this?

(Remember: Hollywood idiots have other people doing their housework.)

Can you imagine the ‘hoods on collection day?

Hey, look on the bright side…they’ve found uses for the poop district in San Franshitsco.

I’m sure somebody, somewhere will complain that their property doesn’t have enough frontage for all the newly mandated separate bins.

Not .enough frontage will result in a stopage.

Throw in a cereal box for some fiber. That should help clear the stoppage.

You left out an intermediate step. Lack of frontage will result in an arrearage. Only then do you get the stoppage.

That was some serious fogging going on in that post, pettifogger.

Of course, most “Hollywood” productions are now made in Canada and elsewhere.

Having the food waste separated out will make it easier for the skunks and the rats to go grocery shopping.

Next they will outlaw Mexican food!

Oops! More disparate impact! The whole thing is racist! Why, it’s as if it’s systemic.

As I am a Texan, banning Tex-Mex food disparately impacts me!

Banning Tex-Mex food would work out about as well as banning alcohol during prohibition.

AHA! They’re increasing the rat populaton to eat up the food waste.

Today I learned that if organic waste decays in a landfill it releases methane, but if it decays in a compost pile it doesn’t.

I learned that if methane is released at the dinner table it bothers the guests.

This story is rather funny to me.

Most people in my locale voluntarily have a separate trashcan for food waste, and another for everything else. It has nothing to do with any BS “climate change” fad.

One can is for paper goods and such. The other is a lockable food waste armored can that keeps the bears out.

It all goes to the same landfill in the end, as it should.

Won’t all of those bins full of rotting food create a fire hazard? If they’re generating methane, any nearby flame could cause an explosion. And packing a truck full of the stuff is like assembling a bomb; sparks from the engine or other mechanisms would be likely to result in an instant conflagration.

Other areas trap methane from landfills and use it to heat local area homes.
That’s not doable in CA ?