Port officials are proclaiming the situation “the new normal”. 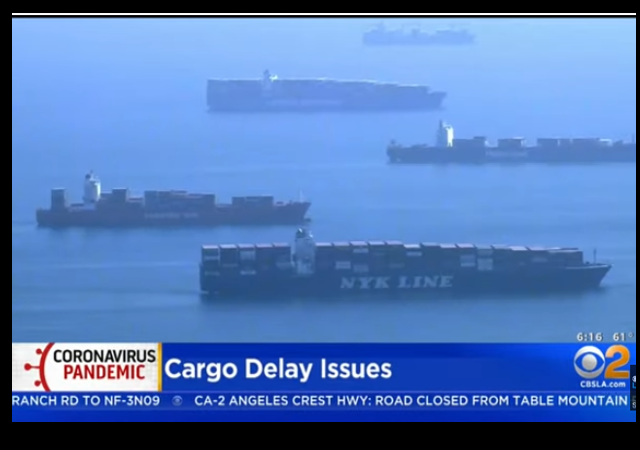 Despite claims that the cargo ship crisis has been resolved, the number of vessels stationed off of the Los Angeles coast is still at an all-time high.

On Tuesday, November 30, Port of Los Angeles Executive Director Gene Seroka announced that there were 46 boats stationed off the shores of California’s Long Beach and Los Angeles ports – a marked drop or more than 100 earlier in the month.

However, according to data provided by ship-tracking website MarineTraffic, there are currently nearly 100 cargo ships waiting to dock at the two popular ports – which have seen unprecedented bottlenecks during the US’ current supply chain crisis.

What’s more, many of these ships have been sitting in the Pacific since October, data shows, leaving hundreds of sailors stranded at sea as they wait to be allowed on dry land.

The problem with the claim is that it is based on massaging the numbers through a rule that forces boats to wait further offshore…so they remain uncounted per the old rules.

The Marine Exchange has just unveiled its new methodology for counting container ships waiting outside the 40-mile “in port” zone.

A new queuing system has been in place since mid-November that encourages container ships to wait outside of a specially designated Safety and Air Quality Area (SAQA) that extends 150 miles to the west of the ports and 50 miles to the north and south.

This has sharply reduced the number of ships closer to shore, leading to suggestions that efforts to tackle port congestion are cutting into the offshore queue — a misconception that should be dispelled by the Marine Exchange’s new counting method.

In addition to the 96 ships waiting offshore on Friday, there were 31 container ships at terminal berths, bringing the grand total to 127, at or near an all-time high.

Clearly, changing definitions to quickly resolve problems or promote a narrative is a hallmark of the Biden administration. In fact, port officials are proclaiming the situation “the new normal”.

Frank Buckley talks with Port of Long Beach Executive Director Mario Cordero about the volume at the San Pedro Bay ports complex and why the backlog of cargo ships and containers should come as no surprise.

“It is the new normal,” Cordero said.

They’re fine. But, almost of that difference is attributable to geography as there are no west coast ports in red states…as there are no red states on the west coast. As the vast majority of our imported goods come from Asia, it’s the west coast ports that have to do all the heavy lifting for Asian importers. While it’s true that Asian suppliers can begin to utilize alternative ports (and to some degree some have done just that), because of the additional cost and time using the east coast via the Indian ocean ports transiting the Panama Canal, most Asian importers are going to maintain the west coast as their preferred port of entry.

You can add this to the many unintended consequences of exporting American manufacturing to Asia the last 40+ years.

So in essence it’s a tariff without using the t word.

They just use the I word “Inflation” instead and try to write that off as part of a booming economy lulz.

Why would the west coast be a preferred port of entry if it cannot be entered? Time is money (generally) so waiting with no known unloading date seems less attractive to adding sailing time and actually unloading. There seems to be a hidden agenda in play.

I think the consequences are intended. This has been planned for over a decade by the traitors and implemented via regulations.

One thing that’s problematic is that it’s insanely expensive to transit the Panama canal Not only are there enormous fees and taxes to pay ($500K or more per ship), but you also have to pay for the additional fuel to and from the alternate port. Also, many of the ships that move cargo from Asia to the west coast are not Panamax-capable; meaning they’re simply too big to transit the canal.

As I said, some shippers are making alternate plans. But, because of the concerns I cited as well as other logistical issues it’s simply not a possible solution for many/most others. I really don’t think there’s any hidden agenda here. Exporters/Importers want to get their goods to market as soon as possible. But, they’re up against a leviathan of a logistics system that hasn’t been built for flexibility, just economy.

I wonder if this drives much of the Chinese subservience the Left has with China?

The Port of Oakland is empty – they are begging for ships to dock there. Same with Boston also empty. Oakland is empty because the truck drivers hate going through the war zone on the way to the port.

Portland is empty because of insane Union regulations – the Chinese refuse to dock at Portland.

Red States – The Port of Mobile is rapidly expanding and will be a factor in the next few years. Savanah is the fastest growing Port in the US.

California regulations will have an effect next year – it will be a bigger mess.

So the TL;dr version of the article is that the Biden regime just pushed the container ships farther out to sea and away from the ports of entry and then are failing to count those ships in a sick, sad, and pathetic attempt to make it seem as if he’s actually doing something about the supply chain problem.

How green is this “new normal” I wonder?

Agreed. Although there is some interesting work being done on using EV technology in new cargo ships. Wind power assisted turbines, efficient airfoils to act as high tech sails. That sort of thing. AFAIK it is all prototypes at the present time.

If you cant see them from shore they dont count – new rules!! The CDC did the same when Biden came in as to what counted as a COVID case/death. That worked, of course this will work just as well.

That’s the kind of white supremacist domestic terrorism thinking that is destroying this country!

Higher ed is pretty much set to implode in the next few years under Biden and the loonies here don’t even see it.

If you’re a youngling right now why go to college, spend money, and waste time that can be spent enjoying life if Biden is going to take care of everything?

While some of you may cheer the implosion of higher ed, it’s bad for our STEM prospects and national defense as a result. The grievance majors will still waste their money in college but who will actually do the hard stuff that betters a society?

Sorry I know that’s off topic, but it fits the pattern of the dem agenda…we can only hope these lazy kids that want everything handed to them are too lazy to vote.

I’m sure Buttigeig is right on top of the situation, between changing diapers as his baby’s new “Mom”.
The contents of these 96 container ships were paid for by US companies, so we have billions floating idly in the Pacific. Another spectacular Democrat Party triumph on its march to national ruin.

Butthead is not on top of anything. The most useless poser this side of Kamala Harris and Obama.

After studying the issues intently, Butt Edge Edge has found the magic bullet cure for everything. If everyone would only get vaxxed, l the supply change disruptions clear up, the border problem will go away, inflation will abate, the urban violence crisis will suddenly disappear and the Detroit Lions will win the Super Bowl. That’s why they pay him the big bucks.

Thanks for reporting on this. When I heard Biden claim victory with the numbers going from 100 to the forties almost overnight, it didn’t pass my smell test. Within 5 minutes, I was able to learn about the California requirements for waiting ships and global warming and how ships were waiting further offshore. Funny that the Biden/Dem mouthpieces we call the media couldn’t find five minutes to do the same.

My son reminds me that in the Gold Rush days, the only people who truly made money were the people who provisioned the prospectors.

We’re probably less than a week away from seeing new gig economy responses to the offshore quarantine dilemma: food deliveries by DoryDash and GrubTug, and personal transport provided by Süber.

This bottleneck was intentional, but it’s backfiring. The marketplace will move ports away from
Los Angeles

Brandon’s not good at running a business. And fudging the math is part of his standard operating procedure deception skills.

The port officials in LA/Long Beach are overly optimistic about the current situation being the new normal. A new norm must be acceptable to all parties or those parties to whom it isn’t acceptable seek alternatives.

For the long shore men they get paid either way. It isn’t as if their compensation is based on the number of unloaded containers. The port operators likewise continue to get paid. The folks with incentives to seek alternatives are the trucking operators, distribution companies, wholesalers, retailers and consumers who can’t get the product. The companies producing goods overseas are being hit with substantial increases in transport costs which may be enough incentive along with PO customers and resulting loss or cancellation of sales to reshore some manufacturing.

Would this get fixed with another hand at the tiller? Sure but 2025 is a long time to wait. I doubt that the market forces won’t alleviate a good deal of the current situation. That ultimately means far less reliance upon these two port facilities.

Shipping costs must be massively increasing. If you halve the number of loads a ship can take per year because of port delays then shipping costs should close to double to make up the difference.

“…Shipping costs must be massively increasing…”

And indeed they are. I’m mostly retired in SE Asia and the business I am still active in is being hit with cartage prices that are double or more from just a couple years ago.
The Left Coast longshoremen combined with the Commidfornia regulators don’t care who they are shanking. They resist mechanization by their contracts and they answer to no one.
Product is backing up in the warehouses and the local shippers won’t load a container unless they have a guaranteed location at the other end.
It’s a major snafu that will take years to iron out.