Hawaii just won praise during the recent international climate crisis for pursuing renewable energy. I sure hope their new power systems work during this blizzard. 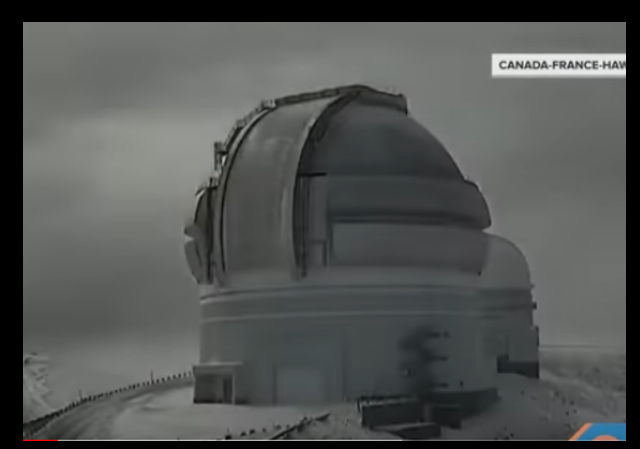 Hawaii is not normally known for its blizzards.

A blizzard warning is in effect for Hawaii’s Big Island mountain summits, with forecasters warning that up to eight inches of snow is possible on Sunday.

The warning in effect through 6 a.m. local time for the mountain region said that “travel should be restricted to emergencies only,” the National Weather Service said.

“Blowing snow will significantly reduce visibility at times, with periods of zero visibility,” the agency said.

In addition to eight inches of snow potentially being dumped on the region, there may also be winds of up to 125 miles per hour, forecasters said.

However, in the interest of science, I will note that the peaks of Mauna Loa and Mauna Kea often get snow in the winter.

The summits are home to space observatories. Visitors traveling to the peak of Mauna Kea are advised to use only four-wheel-drive vehicles because of the steep terrain.

“Bear in mind, there is no one who lives up there,” said Maureen Ballard, a Weather Service meteorologist in Honolulu. “We do get snow there pretty much every year.”

On social media, some locals expressed exasperation with the breathless reactions of those on the mainland.

“Guys. Guys. Calm down,” one woman wrote on Twitter. “I was born and raised on the Big Island of Hawaii. We get snow on the top of Mauna Kea almost every winter.”

However, the news was still shocking to meteorologists, who noted that they beat most of the US in this year’s race to the first blizzard warning.

CRAZY World!! Here it is folks, #Hawaii has Blizzard Warning for the Volcanic Summits. That means they have beat every other state except for parts of the Plains and Alaska for a #Blizzard Warning this year. #winter @spann @foxweather pic.twitter.com/FGp1F0Xtu2

I would like to round out today’s “global warming” review by noting that the Antarctic experienced a record cold winter this year, and the Arctic froze early trapping 18 ships. These chilly events would not have surprised those of us who follow the solar Maunder cycle.

Real science: The ability to project that the Sun is the primary driver of global temperatures and be correct in that assertion.

Grand Solar Minimum (2020–2053) that will lead to a significant reduction of solar magnetic field and activity like during Maunder minimum leading to noticeable reduction of terrestrial temperature.

Hawaii just won praise during the recent international climate crisis for pursuing renewable energy. I sure hope their new power systems work during this blizzard, and the subsequent ones that are likely to exepience.

Hawai‘i was recognized for producing real results as a leader in the climate change effort. Governor Ige and a delegation of environmental advocates showed how a small island state like Hawai‘i can move the world with innovation, big ambition and action. Governor Ige emphasized, “We in the islands feel this sense of urgency about the climate crisis.

In Hawai‘i, reversing climate change is critical to preserving our way of life and unique biodiversity and culture. That’s why we became the first state in the nation to embrace the 2015 Paris climate agreement in law. We also led the way in announcing a state goal of 100 percent renewable energy for electricity by 2045. We showed in Scotland that island communities matter, and Hawai‘i has an important leadership role to play at the ’super-national’ level. ”

The West Maui mountains used to be one of the most beautiful sights in the world. Now, they are marred by the string of windmills going up and down the mountains. It would have been much better to install a small nuclear power plant somewhere on the island.
https://www.gettyimages.com/detail/photo/springtime-aerial-view-showing-the-kahea-wind-power-royalty-free-image/1033874488