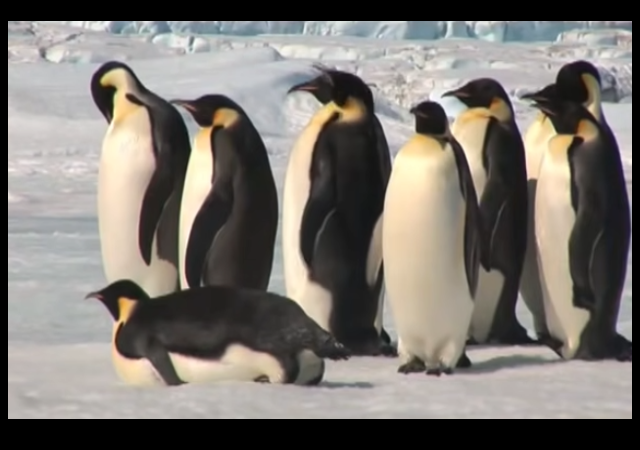 While Americans enjoyed balmy summer days, the southern hemisphere had an exceptional winter.

The South Pole recorded its coldest winter on record.

Between April and September, a research station sitting on a high plateau in Antarctica, registered an average temperature of minus 78 degrees Fahrenheit (minus 61 degrees Celsius). That’s the coldest temperature recorded since record keeping began in 1957, and about 4.5 F (2.5 C) lower than the most recent 30-year average, according to The Washington Post.

The previous record for the coldest winter was minus 77 F (minus 60.6 C) in 1976, Stefano Di Battista, a journalist wrote on Twitter. The Post learned of this record through Battista, but then confirmed the information with Richard Cullather, a research scientist at NASA’s Global Modeling and Assimilation Office.

Scientists credit a strong polar vortex for the deep freeze.

The stratospheric polar vortex is a seasonal phenomenon. In the Southern Hemisphere, it forms in the fall, persists through the winter and weakens before reversing course in spring.

The strength of the vortex has connections to weather at the ground, said Krzysztof Wargan, a research scientist with NASA’s Global Modeling and Assimilation Office. He said a strong vortex is associated with low surface temperatures.

Whether the vortex is strong or weak depends on a cycle known as Southern Annular Mode (SAM). Right now, the mode is in its positive phase and the vortex is intense.

“Basically, the winds in the polar stratosphere have been stronger than normal, which is associated with shifting the jet stream toward the pole,” wrote Amy Butler, an atmospheric scientist at NOAA in a message. “This keeps the cold air locked up over much of Antarctica.”

As a reminder, the press featured the melting of Antarctica’s “Doomsday Glacier” as proof of global warming just as the record cold season began. This gem was published in April.

The fate of Thwaites – nicknamed the doomsday glacier – and the massive west Antarctic ice sheet it supports are the biggest unknown factors in future global sea level rise.

Over the past few years, teams of scientists have been crisscrossing the remote and inaccessible region on Antarctica’s western edge to try to understand how fast the ice is melting and what the consequences for the rest of the world might be.

“What happens in west Antarctica is of great societal importance,” said Dr Robert Larter, a scientist with the British Antarctic Survey and principal investigator with the International Thwaites Glacier Collaboration, the most ambitious research project ever carried out in Antarctica. “This is the biggest uncertainty in future sea level rise.”

More serious scientists should, just perhaps, consider the level of solar activity when assessing causation for the record cold. For example, a paper published in Temperature reports that the Sun has entered into the modern Grand Solar Minimum (2020–2053) of sunspot activity. This means that there will be a significant reduction of solar magnetic field and activity like during Maunder minimum leading to a noticeable reduction of terrestrial temperature.

Currently, the Sun has completed solar cycle 24 – the weakest cycle of the past 100+ years – and in 2020, has started cycle 25. During the periods of low solar activity, such as the modern grand solar minimum, the Sun will often be devoid of sunspots. This is what is observed now at the start of this minimum, because in 2020 the Sun has seen, in total, 115 spotless days (or 78%), meaning 2020 is on track to surpass the space-age record of 281 spotless days (or 77%) observed in 2019. However, the cycle 25 start is still slow in firing active regions and flares, so with every extra day/week/month that passes, the null in solar activity is extended marking a start of grand solar minimum.

It appears that the concept is gaining ground with the National Aeronautics and Space Administration (NASA). Predictions indicate that the Sun’s sunspot level will bottom out in 2025.

An approaching Grand Solar Minimum is gaining “support” including NASA with their recent SC25 prediction — though they stay clear of the implications. NASA’s forecast for the next solar cycle (25) reveals it will be the weakest of the last 200 years.

The maximum of this next cycle — measured in terms of sunspot number, a standard measure of solar activity level — could be 30 to 50% lower than the most recent one. The agency’s results show that the next cycle started in 2020 and will reach its maximum in 2025.

However, none of this information supports “The Science” preferred by the media and green justice activists in key government positions. So, of course, the record cold means nothing.

The weather gets cold, and the jokes come out. “Whatever happened to global warming?”

Sometimes, though, it’s not a joke. Sometimes, it’s a sign that the person asking the question doesn’t fully grasp the science behind the climate change. They may not realize that one data point – Antarctica’s coldest winter on record, for example – isn’t enough to invalidate a wider trend.

Has anybody got any figures on how much propane the University of East Anglia’s Climate Research Unit is wasting trying to melt our icecaps?

The warmists just dismiss this as “weather isn’t climate” while ignoring all the times in the past where various weather events have been said to prove global warming, climate change or whatever they call it today.

To the Left, cold weather is never climate, but hot weather — especially if they can exaggerate its significance — absolutely is.

When I bring this up with my father, the oceanographer, asking why the hottest whatever is always climate and proves global warming is real, but the coldest whatever is just local weather, and funny thing, I’ve never gotten an answer…. He’s also never explained why the sun’s activity has nothing to do with modern weather although it had everything to do with it in the past.

You are an idiot. Global warming makes the weather colder but the climate warmer. The computer models at the UN prove it. Deny the science all you want, but we are watching everything you do, say, and write. This is an existential threat to the Earth and peoples everywhere, especially people of color, and non-binary trans-species lesbians of color. There are no steps too drastic we can take to SAVE THE PLANET! We will deal with recalcitrant deniers like you who endanger every living thing on planet Earth. This is unacceptable, and you have been warned.

Good one, you actually had me going for a second there 🙂

The left will be all over this.

Greta think-and-burger will be placed in an induced coma til the warm weather thaws her out!

Too late to save her brain. She’s as smart as she’s ever gonna get.

Hey, at least that way she can’t say ‘You’ve stolen my YOUTH!’.

It seems like a weather-independent test of climate to me. You can’t manufacture global record cold – it didn’t move in from somewhere else. The only way to get it is by radiation through the atmosphere to space, where it’s colder. If the atmosphere is radiation-transparent enough to do that today at a record level of clarity, then CO2 , far from screwing it up, is low enough not to prevent it. End of proof.

The mean average surface temperature of the planet has probably warmed around 1C over the past 150 years. That means the average temperature in any given year is not materially different from any other year.

So if some place briefly experiences exceptionally cool weather, then someplace else is probably exceptionally warm weather in order for the average to remain roughly the same.

So, you are saying the weather and climate naturally balance out, so there is no point in spending money to try and change anything?

. To reduce the odds of being mischaracterized, I want to explain my decision here.

Thank you for taking a stand for science, academic inquiry, unity, reason and logic above bigotry and division. We need 1 million more like you.

My apologies Brian. I should have put it in quotes. I am not that person but I agree with you 1000%

MIT should be ashamed. I posted a longer and more detailed comment last night about yesterday’s disgusting response from Rafael Reif, at the end of an older, related LI article.

Better check your carbon footprint before flying. Most likely this is the beginning of giving each American citizen a social credit score 🙂

“They may not realize that one data point – Antarctica’s coldest winter on record, for example – isn’t enough to invalidate a wider trend.”

Here IS a wider trend: EVERY month in 2021 so far (January through September, 9 months) has been cooler than the corresponding month in 2020: http://www.drroyspencer.com/2021/10/uah-global-temperature-update-for-september-2021-0-25-deg-c/

What? You think facts matter to the climate change gang?

And I am positive some time late December the local news weather will tell us it’s been the 3rd highest temperature average on the planet.

Reminds me of that scene in Madagascar where the penguins arrive in Antarctica:

“So if some place briefly experiences exceptionally cool weather, then someplace else is probably exceptionally warm weather in order for the average to remain roughly the same.”

Someday, we will emerge from the current ice age. That day does not appear to be today.

On a more practical note, I’m hoping that my backup generator arrives and is installed prior to the next “100 year” freeze in S. Texas.