Another victory for Loudoun students and parents. 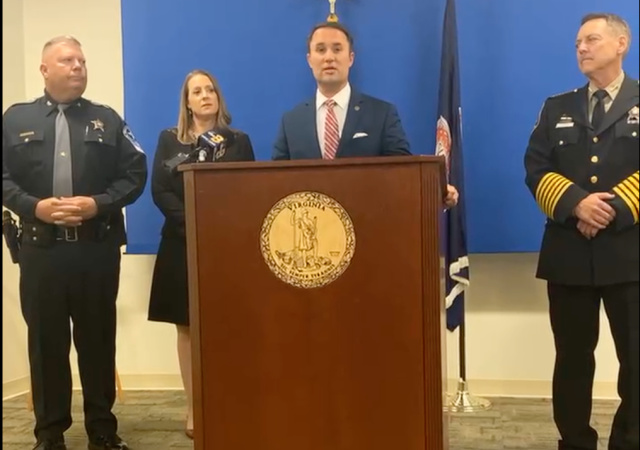 Miyares held his first press conference today to discuss the transition, giving the press the opportunity to quiz him on an array of legal matters. One reporter asked him, “Do you plan to investigate Loudoun County Public Schools and the recent sexual assaults that have happened there?” Miyares gave a direct answer: “Yes.”

Jason Miyares will be sworn in as Virginia’s new attorney general on January 15, 2022.

Hopefully, his investigation will ask why the school district and the school board did not inform parents about a rape that occurred in their kids’ school.

For contrast and comparison they can also compile a list of all incidents they decided were important enough that parents should be informed. Things like alleged ‘hate speech’, and alleged ‘racism’, and alleged ‘transphobia’, etc.

That was a solid first press conference as AG-elect. He’s very well-spoken with a calming, reassuring demeanor. There’s potential there for bigger things, IMO.

Good, and should he find enough evidence to prosecute some school officials I hope he does so.

I have absolutely no apatite to make a high school age student the target of a political witch hunt. Any sexual assault allegations should be processed through the normal channels to determine the question of guilt and disposition of the accused. We don’t need to inflame any specific case.

However, we need to have a robust policy debate on the issue of access to high school bathrooms, without regards to any individual student(s). It is possible to have a three-part solution: male students, female students, with other students and faculty being addressed in separate single-user rooms. There have been policy challenges in schools for a century as we migrated from one-room school houses with outhouses and no working plumbing to the modern system that generally segregates post-puberty students in a high school that is separated generally from younger students. There are many traditional reasons for separating students based upon age, and there are many reasons for separating bathrooms based upon sex.

I don’t think anyone is talking about going all January 6 on rape suspects, but it might be a good idea for the Commonwealth to look into whether or not their school administrators are covering up incidents and obstructing justice.

The young man’s case has already been adjudicated in juvenile court. Details are limited (it’s juvenile court), but the judge sustained the petition, meaning the defendant has effectively been found guilty of the rape.

The new AG wants to investigate the behavior of the school staff and the administrators, not the rape itself.

I suggest you return to school and get an actual education. The new Virginia AG is doing precisely what a good state AG should do – investigate the corrupt at the higher levels when there is evidence that state law has been broken. Suggesting anything short of that is to suggest you have no interest any actual law.

I don’t think anyone is calling for a witchhunt into a high school student. However, if he committed a rape, he needs to be adjudicated in the proper courts, and not passed along to another school so that he can do it again.

And the school administrators and board should be investigated to see if they broke any reporting requirements, and perhaps sued civilly for how they handled the whole sorry mess. They should also be investigated for conspiracy to violate the rights of parents in their pathetic attempt to label them racists and shut down speech.

An AG committed to the protection of citizens, as opposed to coddling and enabling criminals, illegal aliens and tranny sex offenders, as is now standard operating procedure for Dhimmi-crat prosecutors — how refreshing.

Don’t know if it is the proper protocol to transfer a student from one school to another with a pending rape charge over their head ? Is this standard procedure for most school systems or something unique for Loudon County.?
To make matters worse there is a report of another crime at his new school this fall.

The ONLY place this man should have been sent to is a police holding cell while his crime was investigated.

It’s also time to get schools, including colleges and universities, out of the business of being separate legal systems.
If a crime is suspected it should be investigated and prosecuted by the DA, in front of a real jury and a real Judge, not in the student council kangaroo court of feelings.
Hopefully, as the new State AG, Miyares can correct that in VA at least.