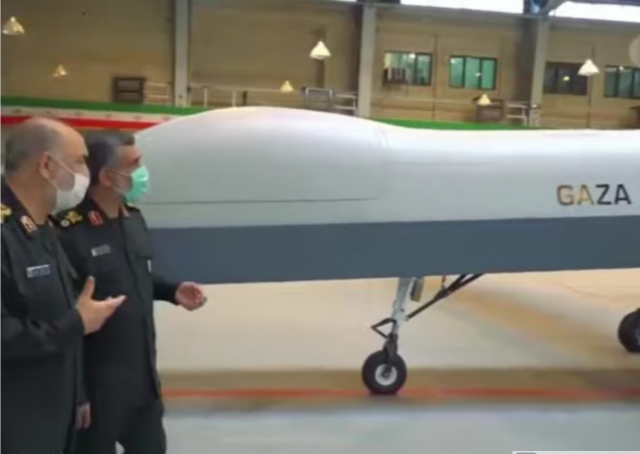 According to the article, Iran conducted a coordinated drone strike on a military base operated by 200 U.S. troops. The suicide drone deployed by Tehran was designed to cause maxim harm to the military personnel. The UAVs were laden with ball bearings and shrapnel, U.S. defense officials told the newspaper.

Thanks partly to the Israeli intelligence, no U.S. personnel were harmed in the strike. Two drones exploded on impact, and three others were recovered from the site, enabling the U.S. military to verify their Iranian origin.

The NYT said that the base, not named in the article, was used by the U.S. military to train Kurds and other allied fighters who fought against the Islamic State (ISIS). Currently, the U.S. has around 900 troops in northwest Syria.

The article suggested that the Biden administration refused to confront Iran over the matter, not derailing the ongoing talks to restore the Obama-Kerry nuclear deal. A “Pentagon spokesman declined to publicly accuse Iran, partly to avoid upending talks to restart the nuclear deal with Tehran,” the NYT noted.

The NYT reported the details of the Iranian attempt to harm U.S. soldiers stationed in Syria:

Five so-called suicide drones were launched at the American base at Al Tanf on Oct. 20 in what the U.S. Central Command called a “deliberate and coordinated” attack. Only two detonated on impact, but they were loaded with ball bearings and shrapnel with a “clear intent to kill,” a senior U.S. military official said.

Most of the 200 American troops stationed at the base, whose main role is training Syrian militias to fight the Islamic State, had been evacuated hours earlier after being tipped off by Israeli intelligence, the officials said.

U.S. officials said they believed that Iran directed and supplied the proxy forces that carried out the attack.

They were reluctant to disclose further details of the attack, and a Pentagon spokesman declined to publicly accuse Iran, partly to avoid upending talks to restart the nuclear deal with Tehran, which are set to resume at the end of the month.

However, both Israeli and U.S. intelligence officials said they had intelligence indicating that Iran was behind the operation. Because three of the drones did not explode, American officials were able to study them and determine that they employed the same technology as drones used by Iran-backed militias in Iraq.

Iran has not claimed responsibility for the attack, though Iranian news media applauded it. (…)

A Telegram channel run by affiliates of Iran’s Islamic Revolutionary Guards Corps said the strike was a response to the U.S. allowing Israeli attacks on “resistance” forces in eastern Syria. Militia commanders, it said, concluded that they “must pull the teeth of the snake,” meaning the United States.

The American base lies on a road serving as a vital link for Iranian-backed forces along a strategic corridor from Tehran through Iraq and Syria to southern Lebanon and the Israeli border. (…)

The American response was to announce new sanctions against two senior members of the Revolutionary Guards, two other Iranians, and two companies that the United States says are affiliated with the Guards’ drone program.

American officials said they were dubious that new sanctions would have enough teeth to do much good. (…)

Separately, U.S. officials complained this month that multiple drones, believed to be Iranian, had an “unsafe and unprofessional interaction” with the U.S.S. Essex amphibious assault ship as the vessel left the Strait of Hormuz.

The Iranian drone strike comes weeks after Iran-backed Houthi militia occupied the U.S. embassy compound in Yemen and took several local staff hostage. It is unclear if the Biden admiration took any retaliatory measure against Tehran in light of the incident.

The article added that while Tehran denied any involvement, the state-controlled “Iranian news media applauded” the drone strike.

The NYT tried to portray the Iranian strike as retribution for Israeli actions against Tehran-backed terrorist militia in Syria. It is worth noting that Iran has been planning attacks against Israeli citizens overseas to ‘avenge’ the U.S. drone strike that killed its top terror operative, Qassem Soleimani. Then-President Donald Trump ordered the January 2020 strike that eliminated Al Quds chief Soleimani. Israel played no role in that operation.

Most likely, the last month’s drone strike on U.S. troops was another Iranian attempt to avenge Soleimani ahead of his second death anniversary. Iran’s ruler Ayatollah Khamenei and Hezbollah chief Hassan Nasrallah, who also controls territory in Syria, declared ‘jihad’ against the U.S. in response to the killing.

As Al Quds chief, Soleimani also controlled pro-Iranian militia in Iraq, planted IEDs, and ambushed U.S. troops stationed in the country. According to the Pentagon, he was killed while plotting imminent attacks on U.S. troops in Iraq and elsewhere. The slain Iranian operative was directly responsible for the deaths of hundreds of U.S. servicemen, the U.S. Defense Department says.

Old Potato Head pretending Iran didn’t try to kill us just so he can give them more stuff and pretend they’ll never nuke us if they have the chance.

The only explanation I can come up with is Valery Jarrett, born in Iran, is calling the shots just like she did with Obama

With Biden… or whoever…. once Japan attacked Pearl Harbor, we should have immediately lifted petroleum and scrap metal embargoes. Think of all the money we would have saved!

This lack of support and gratitude is what Biden is showing the Israelis . Instead of fighting Islamic terror rooted in Iran, Biden engages in appeasement of terror ala Neville Chamberlain

I am frustrated, Iran should be squashed like a nasty bug, It really would not be hard to move Tran back to living conditions comparable to when Mohammed the barbarian ruled.

All issues are in doubt. Each and every one of them,

Just like Obama, Biden* grabs his ankles and lets the Mullahs pound away. And then they turn around and PAY IRAN for the ass-reaming they just took. Pathetic losers.

You can bring a horse to water…

The disease called ‘Obama’ continues in his third term.

Don’t get so excited about the GOP retaking the House in 2022: those corrupt bastards will stab us in the back, and wind up losing it back to Pelosi.

The ONLY party worth a crap is the unofficial ‘Trump’ party. He and his supporters are the ONLY uncorrupted politicians left.

I think that Obama is knee deep in using Biden as a puppet.

The USA gave them a lot of drone technology when they allowed one of our drones to be examined and copied instead of having a self destruct built in for the event of it landing in enemy territory. A very stupid stunt. The safety precaution would have been cheap and effective.

And if the Iranians had successfully pulled off this attack and killed US service members, they’d have earned a sustained attack against multiple military targets in Iran.

It just blows my mind how weak and fawning Biden is. Oh, we wouldn’t want to derail “the talks” and upset Iran, so we’ll just let them get away with an honest-to-God attempt to kill dozens of US troops where they were caught red-handed.

The thing that Biden and his cronies don’t understand is that by projecting weakness, he makes a real negotiated settlement far more unlikely. Iran doesn’t respect the “weak horse” and Biden is broadcasting weakness.

So “the talks” will drone on endlessly with no progress while they get closer every day to nuclear weapons. Good grief.

Nothing surprises me, anymore, regarding the vile Dhimmi-crats’ stupefying naivete, foolishness, stupidity, fecklessness and vanity, in foreign policy. Dotard Xi-den and his Obama-lackey puppetmasters/chaperones/caretakers still indefensibly kowtow to, and, play footsie with Iran’s Muslim terrorist, fanatical despots, despite their attacks on U.S. troops, their global terrorism-sponsoring, their genocidal aspirations and proxy attacks against Israel, and, innumerable other sundry acts of evil and aggression.

MORONS in the white hut…….again.. ANYONE with a tad of good gray matter would have leveled the base from which these killers launched from…IMO.

Israel has to regard the current administration as the enemy and not release any intel through government routing and deliver it directly to field military units.