“The State Department is working to secure the release of several kidnapped hostages taken by Iran-backed terrorists.” 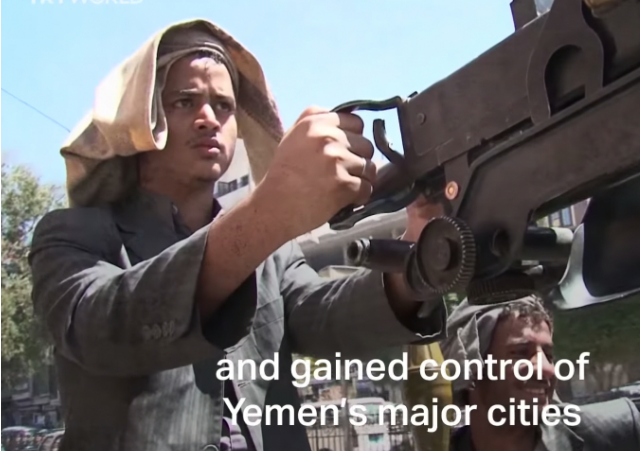 The Iran-backed Islamist group, which President Joe Biden removed from the terror list, has stormed the U.S. embassy in Yemen. The Shia-Islamic Houthi militia occupied the embassy on Wednesday and took several embassy staff hostage, the news reports say.

“The State Department confirmed to the Free Beacon that the Yemeni staffers are being detained without explanation and that the Iran-backed militants stole property after breaching the American facility in [Yemen’s capital] Sana’a,” Adam Kredo reported, who first broke the story in the Washington Free Beacon.

Weeks after taking office, the Biden administration removed the Houthi jihadi militia from the list of designated foreign terrorist groups, reversing a decision taken by former President Donald Trump. The move came as the Biden White House began appeasing the Iranian regime in efforts to restore the Obama-era nuclear deal.

Iranian-backed Houthi rebels have stormed the US Embassy in Yemen and taken hostages.

Within a month of taking office, Joe Biden removed the Houthis from the terrorist watch list.

This is the awful price of showing weakness to our enemies. https://t.co/Ih8TeylXyu

The hostages appear to be local embassy staff of Yemini nationality, media reports suggest. The U.S. diplomats were evacuated from the country six years ago amid a raging civil war.

The Washington Free Beacon reported the details of the U.S. embassy attack:

A group of Houthi rebels reportedly stormed the U.S. compound on Wednesday seeking “large quantities of equipment and materials,” according to regional reports translated by the Middle East Media Research Institute. The raid comes just five days after the Houthis kidnapped Yemeni nationals who work for the U.S. embassy. “The alleged raid comes after the Houthis kidnapped three Yemeni nationals affiliated with the U.S. Embassy from one of the employee’s private residences in Sana’a on November 5,” according to MEMRI. At least 22 other Yemenis were kidnapped by the Houthis in recent weeks, “most of whom worked on the security staff guarding the embassy grounds,” according to MEMRI.

The State Department confirmed to the Free Beacon that the Yemeni staffers are being detained without explanation and that the Iran-backed militants stole property after breaching the American facility in Sana’a, which housed U.S. embassy staff prior to the suspension of operations there in 2015.

“The United States has been unceasing in its diplomatic efforts to secure their release,” a State Department spokesman told the Free Beacon. “The majority of the detained have been released, but the Houthis continue to detain additional Yemeni employees of the embassy.”

Those still being held are “detained without explanation and we call for their immediate release,” the State Department spokesman said.

Among those who were kidnapped and held by the Houthis include a former embassy employee, an economic officer, and a U.S. Agency for International Development employee, according to MEMRI.

The Houthi terrorist group, officially known as the “Ansar Allah” — Arabic for ‘fighters of Allah,’ controls large parts of Yemen and regularly carries out terrorist cross-border strikes into neighboring Kingdom of Saudi Arabia. Despite removal from the terror list by the Biden State Department, the Islamist group continues its campaign of jihad and mass murder. The Iran-backed militia’s official banner declares: “Allah is Greater, Death to America, Death to Israel, Curse on the Jews, Victory to Islam.”

This is not the first attack of its kind by the pro-Iranian terrorist groups in recent years. In December 2019, Iran-backed terrorist militias stormed the U.S. embassy in Baghdad. The armed militia and rioters vandalized the American diplomatic compound as they shouted “Death to America” and “No, no, Trump.”

Democrats and the mainstream media were enraged over President Trumps decision to eliminate the top Iranian terror operative, who was directly responsible for deaths of hundreds of U.S. servicemen in Iraq and rest of the Middle East. Soleimani was planning imminent attacks on U.S. troops and diplomats in the region, the Pentagon disclosed after the strike.

The mainstream media is largely been silent about the latest outrage by the Iranian proxy terrorist groups in Yemen. The media firmly backs the Biden White’s push to bring Iran into the fold of Obama-Kerry nuclear deal. Tehran continues to enrich near-weapons grade uranium and obstruct the UN inspectors from accessing key sites linked to its nuclear weapons program.

I assume that the Biden regime considers this a major foreign policy success.

It does follow the highly acclaimed Obama model: premature evacuation, wars without borders, coups without cause, per chance [catastrophic] [anthropogenic] immigration reform. Was anyone sodomized?

Tacking on an attacks tax would be tacky.

Who would have guessed holding hands and singing were not going to make use pals? sarc

According to Joe, Yemen is a brand of insta-noodles. Come on man!

If the yemen noodles are on the same container ship with Joe’s depends from China they will be among the first to be off-loaded in California.

Wouldn’t be better to offload those things in Florida?

I suppose you’re right. They could secretly off-load them along with the illegal aliens they take to Florida in the middle of the night.

VP, NOW P, Biden is following in his mentor’s footsteps.

But at least we don’t have an Orange Man making mean tweets on Twitter, right? Right?!??

I wonder why Glenn Beck doesn’t rub chocolate pudding on his face and pretend to be Alzheimer Joe. I would be looking forward to reading his absent minded tweets.

‘The armed militia and rioters vandalized the American diplomatic compound as they shouted “Death to America” and “No, no, Trump.”‘

So they’d fit right in with the domestic agenda of the Democrat party, then.

And 16 Americans remain hostages in Haiti after their kidnapping 30 days ago.

It would be nice to see both Iran’s & Afghanistan capitals destroyed.

Thanks, Vijeta, for the report—and the context information.

Thank you for your kind words. It is a pleasure to write for the LI readers.

I’m as shocked as anyone by their actions. There were NO clues that they might engage in terrorism… no MAGA hats, no tiki torches, no school board meetings… nothing.