Fox News digital covers our database of Critical Race in its various forms permeating the 50 Most Elite Private K-12 Schools. 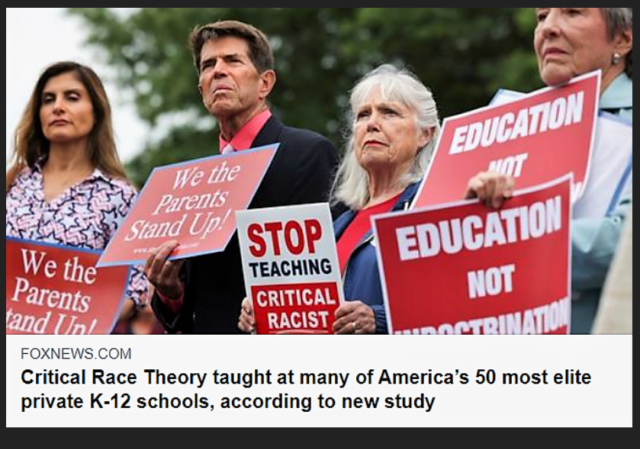 CriticalRace.org was launched by the Legal Insurrection Foundation in early February 2021 to much fanfare. The site was crushed (but not broken) by one million views within the first 24 hours of my announing the launch on Tucker Carlson Tonight:

Since then the unique higher ed interactive database has continued to receive widespread media coverage.

While we always have included extensive K-12 resources, in October 2021, we rolled out the first K-12 database, focused on the Top 25 Most Elite Private K-12 Schools. I was quoted on the importance of these schools to Fox News digital:

“That forms of CRT have so deeply penetrated the most elite private K-12 schools is a troubling development because, like it or not, these elite schools feed students into elite higher education and in turn, become future leaders in high tech, government, and journalism,” Jacobson said. “What happens at these elite private K-12 schools matters to the country as a whole and our future as a society devoted to equality, not race-based classifications and conflict.”

That list now has been expanded to the Top 50 Most Elite Private K-12 Schools, and Fox News digital covered this rollout as it had the previous rollouts.

Here are excerpts, but please click over and read the whole things, Critical Race Theory taught at many of America’s 50 most elite private K-12 schools, according to new study

A website that features a database with information on critical race theory (CRT) curricula and training in higher education found the controversial ideology is infiltrating many of the most elitist K-12 private schools in America.

Last month, the project focused on the top 25 private schools in the country and researchers found some openly admit to teaching CRT, while others are more subtle.

Over the past few weeks, the topic has become even more polarizing amid furor surrounding the Virginia gubernatorial race, with Democrats and liberal pundits claiming CRT isn’t taught or doesn’t exist.

As a result, William Jacobson, the Cornell University law professor who founded CriticalRace.org, amped up the research to include twice as many schools. The Top 50 Elite Private K-12 Schools in the country, as ranked by Niche.com for 2022, are now included.

“The election results in Virginia showed that opposition to CRT in its various forms is motivating a diverse, multi-racial, multi-ethnic coalition of parents to act against the racialization of education,” Jacobson told Fox News Digital.

“The response from the mainstream media and Democrats to this parents’ movement has been to ramp up denial that CRT is taught, but that is just a word game. The principles of CRT, primarily the focus on race and skin color as the decisive and pervasive features of society, increasingly pervade K-12,” Jacobson said….

“Our survey of the Top 50 most elite private K-12 schools proves how deeply the racialization of education has penetrated,” Jacobson continued. “While many schools run from the term ‘critical race theory,’ the ideology is present through an obsessive focus on viewing almost everything through a racial lens.”

Jacobson feels what’s happening at the Top 50 most elite private K-12 schools is the “proverbial canary in the coal mine” for K-12 nationally.

“The economic elites who send their children to these schools at great expense have voluntarily surrendered their children to an activist and consultant educational class that sees exploiting race as a way to power and riches,” Jacobson said.

Jacobson said many parents are afraid to speak out, and he heard that parents at the prestigious schools fear being socially ostracized.

“At some point these parents are going to have to put their children ahead of the prestige and alumni connections of these schools,” he said. “The next step in this elite private school database project is to connect with parents who can add more details and documents as to what is going on that may not be available on the internet.”

We are continuing the project.

FOOLED INTO ADOPTING THE WOKE LANGUAGE

“CriticalRace.org found that 21 of the schools had some form of mandatory anti-racism training for students,”

The above is a direct quote from the FOX NEWS excerpt provided by Prof. Jacobson.

Reading it, you would think that CriticalRace.org is opposed to ANTI-RACISM.

That’s because news organizations use the terminology that the Progressives put forward (yes, even FOX). Any news media that does this is a willing FOOL for the radical left race-baiting jerks.

The radical left are masters at propaganda and at playing the media or using the media. They adopt terminology that is specifically chosen to make opponents seems like bad guys. For example, only bad people are opposed to:
— anti-racism
— Equality Project (a Human Rights Campaign slogan ie LGBTQ)
— Black Lives Matter

They set you up so that you literally imply you’re a racist if you say “I’m against anti-racism”. And you imply your an extremist if you oppose “Equality” and the issues then become YOU not the radical gender confusion promoted by HRC. Lastly, you imply that Black Lives do not matter if you oppose BLM’s race-based marxism.

Using the radicals preferred acronym “DEI” is another case. DEI means “GOD” in Latin, It has a positive connation. WHY USE THEIR PREFERRED acronynm? All you do is advance their propaganda EVERY TIME. You become a fool for the radical left. Personally, I prefer the acronym DIE. It conveys best what they want to do to American society.

EVERY PERSON AND ALL EDITORS AND REPORTERS HAVE TO GET SMARTER ABOUT THE WAYS THE RADICAL LEFT USES THEM TO ADVANCE THEOR PROPAGANDA.

STOP taking the bait they put out.

MY GOD, does someone really have to say this? Isn’t it soooo obvious. Are there any editors and reporters that actually think anymore – to prevent themselves from being manipulated ?

It’s perspective and simple recognition of the way the brain works. And your are correct that the approach taken by the progressives works on a simple principle: the brain cannot not do anything unless it does it first.

Simply put, you cannot be “anti-racist” until you’ve been “racist.”

So to move the goal posts on those that claim they are “not racist” you have to let them know they have to go there to get there.- yes, they have to start by being racist.

Critical race theory and “equity” REQUIRE racism, while equality, as taught by MLK Jr., rejects it.

These CRT people are race hustlers of the first order.

“Capitalism” is also a Marxist term and should always be replaced by free or open markets. I am a free market supporter for example.

The left has been doing this under your nose for about 100 years. See John Dewey

This has been happening for decades now. This all of a sudden did not happen. Leftists have been slowly infiltrating the education system since the 1980s, but soft headed RINOs have ignored the problem and worst has called people who called out this infiltration as radicals, extremists, conspiracy theorists. For too long, establishment republicans like Romney and his supporters have failed to supported even moderately right people in academia. They have turned a blind eye for decades, allowing the take over of education.

Guardian79, Exactly! It probably began before the 80s, but it took on added force with the arrival of the true cancer, schools of education, which supply almost all the administrators and teachers in grades K through 12 in the entire nation. “Pedagogy of the oppressed.”

CRT is a Marxist and anti Semitic without any evidence that has been allowed to fester like a malignant tumor that must be fought at the school board , academic, political and media levels

Just don’t waste your money, and lots of it, on indoctrination. Go to a vocational school and get a real career, something the country needs, not some XXX-studies tripe.

Let them wither on their communist vine.