Fox News covers our new database at CriticalRace.org. Quoting me: “What happens at these elite private K-12 schools matters to the country as a whole and our future as a society devoted to equality, not race-based classifications and conflict.” 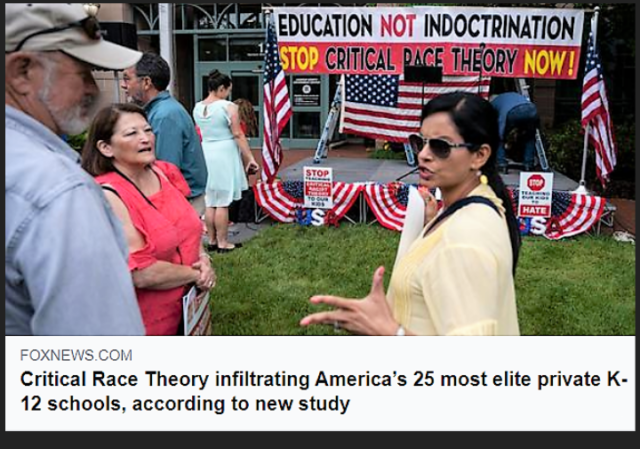 CriticalRace.org, a project of the Legal Insurrection Foundation, has launched a new initiative, rolling out a database of Critical Race Training at the 25 most elite private K-12 schools.

A website that features a database of information on critical race theory (CRT) curricula and training in higher education unveiled a new study Monday focusing on the controversial ideology infiltrating the top 25 most elite K-12 private schools in America.

The project indicated that some schools openly admit to teaching CRT, while others are more subtle. Of the top 25 private schools, the database found that seven had some form of mandatory anti-racism training for students and a staggering 20 of 25 schools had some sort of curricular requirement change based off of anti-racism, Diversity, Equity and Inclusion (DEI), or critical race theory.

William Jacobson, the Cornell Law School professor who founded the conservative-leaning site Legal Insurrection, created CriticalRace.org earlier this year to track how the widely debated concept is permeating U.S. institutions. His new initiative covers the same information as the higher education database, with a focus on K-12 learning.

“Critical Race Theory is an elite ideology developed originally at Harvard Law School that has now spread in various forms and variations to K-12, corporations and government. The hyper-focus on and centering of race is contrary to the values of equality and treating people as individuals not mere group members,” Jacobson told Fox News Digital.

“Forms of CRT, using euphemisms such as ‘antiracism’ and ‘equity,’ have deeply penetrated the most elite private K-12 schools,” Jacobson continued. “Race has become an obsession at many of these schools, dominating the culture and even academics.”

Jacobson hopes his database will prove helpful for prospective students and parents deciding which school to attend. The database currently focuses on the 25 most elite private schools in the country, as ranked by Niche in its recently released 2022 rankings. Jacobson expects it to expand to the top 50 private K-12 schools by the end of this year.

In addition to cataloging CRT efforts, the website lists a series of resources purportedly “exposing the falsity and harm” caused by CRT.

“That forms of CRT have so deeply penetrated the most elite private K-12 schools is a troubling development because, like it or not, these elite schools feed students into elite higher education and in turn, become future leaders in high tech, government, and journalism,” Jacobson said. “What happens at these elite private K-12 schools matters to the country as a whole and our future as a society devoted to equality, not race-based classifications and conflict.”

The FoxNews.com article also lists the schools covered in this new release:

Flashback for those who missed the original February 2021 rollout of the higher education database:

Poke a hornet’s nest, get stung.

Nothing good comes out of this, just more division.

Should we segregate society again?

In answer to your question, perhaps we should. I’m just getting so sick and tired of restless, race that, race the other.

Well, well…whst do we have here? A conflict of interest, perhaps?

Notice how clever the keywords are that this company uses to define its mission: Systemic Social-Emotional-Learning. Don’t ask the obvious question, “..who writes like this?”

This type of writing is called a soft sell in marketing terms, but know that the words are carefully chosen because they align with the Democrat party’s agenda. This is more about the capitalization by the elite of the full indoctrination of society of CRT and the management of effectiveness by measuring, supporting, and with full reporting of student and adult SEL.

This is how the progressive elite in Washington, DC roll. Just like we see with the unjust enrichment of Hunter Biden, Merrick Garland is helping his son-in-law start a company at age 28 by raising $60 million in venture capital. Apparently, with help from Zuckerberg’s wife, no less.

Just look at how far the progressives have managed to come, the reach of implementation, and in this example, the use of federal (Department of Education) and political (Garland) influence to make sure their children have, as Joe likes to say, “good-paying” jobs to start their young married lives together. How thoughtful of the bride’s father to use the Department of Education initiatives to help the young couple get on their feet. Isn’t it interesting how much progress and how fast the Democrats get things done since the death of George Floyd? Can you see why the Democrats made sure the Floyd family got paid ($27 million) fast and out of the way because this was coming down the path? The Democrats do not care about the education and welfare of African Americans: they use black Americans to get themselves rich.

We need to ask how much is Merrick Garland’s kickback from this start-up company. Could it be the standard 10%?

Watch what happens here, longer-term: Xan and Rebecca get super-rich when Panorama Learning is sold to a larger company because the buyer wants in on the gravy train: the long-term contracts Panorama has established with school districts across the country. You can bet old Merrick will get his “fair share.”

Without critical legal intervention, investigations, and conflict of interest lawsuits putting an end to this, the rollout of CRT is never going to go away.

Unless the main stream media picks up the story, nothing will happen. As for selling the company, sounds like a good property for McGraw-Hill.

No doubt this now puts the site on the DOJ radar.

My old high school is justifiably on the Prof’s list. The school is at a critical point, with an interim president who has published some distressing items favoring CRT.

Either our system is irredeemably racist and exclusionary; in which case the current occupants of the seats of power and authority are illegitimate….. or it isn’t. Choose wisely.

Meh. we crossed that Rubicon decades ago. The organizations that used to discriminate in favor of white people could no longer do that, but all organizations were required to give preferences to black people. But “the preferences aren’t discrimination” and “the goals aren’t quotas.” For the sake of civility, we swallowed that 2+2=5, just in this case, just to get along. But knowing now where that inevitably led us, I wish we had pushed back full force and told the racialists, “No, you shall not pass.”

The State of Washington has gone whole hog, and has established a State Department of Equity to spread the diversity-equity-inclusion poison from the top down. This is way beyond the school system – it’s aimed at any and all State departments with ‘disproportionate’ racial balances. Example:

Gov. Jay Inslee today named Karen A. Johnson, PhD, director of the newly created state Office of Equity. The Office of Equity, established by the Legislature, was signed into law by Inslee in April of 2020. The office will work with agencies to increase access to equitable opportunities in order to bridge opportunity gaps and reduce disparities. The office will also work with communities to develop the state’s five-year equity plan.

This specifically has its sights on professional organizations which issue licenses only to those who pass rigorous exams. Watch the standards closely, see how long they remain rigorous.