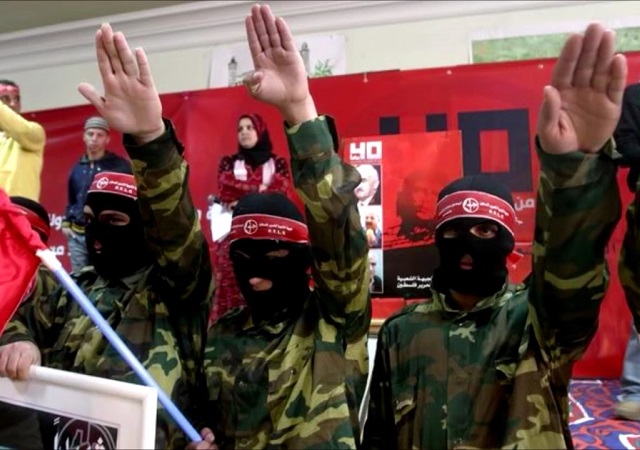 President Joe Biden’s administration faces pushback from the Israeli government after State Department spokesman Ned Price repeated the White House’s claim that Jerusalem did not give a heads-up before blacklisting several Palestinian NGOs linked to a terrorist group.

On Friday, the Israeli government designated six NGOs linked to the Popular Front for the Liberation of Palestine (PFLP) as “terrorist organizations.” These NGOs operated as front groups and had funneled millions of dollars in foreign aid to the PFLP, a U.S.-designated terrorist group.

The PFLP, a Palestinian-Marxist terrorist group, gained notoriety in the 1970s when it carried out a series of deadly aircraft hijackings and high-profile terrorist attacks — many of them with the help of far-left European terrorist organizations. The terror outfit is committed to the destruction of Israel and continues to wage terrorist attacks on Israeli civilians and military personnel.

The Israeli foreign ministry is “baffled” over the Biden administration’s claims that it did not receive a heads-up on the blacklisting of terrorist-tied NGOs, The Jerusalem Post reported on Tuesday.

Jerusalem is willing to clarify the matter further and plans to send a delegation to make its case to the Biden White House. “Officials from Israel’s foreign ministry and the Shin Bet are planning to send a delegation to Washington to present the Biden administration with information about the named Palestinian NGOs and their ties to the Popular Front of the Liberation of Palestine (PFLP), which was designated a terror group by the United States in October 1997,” the news agency Jewish News Syndicate reported on Tuesday.

The Times of Israel reported the Biden White House’s dogged response to the banning of the terrorist-linked NGO network:

The Biden administration is standing by its assertion that Israel did not give it a heads-up before its controversial decision last week to blacklist half a dozen Palestinian human rights organizations.

“It is to the best of our knowledge accurate that we did not receive a specific heads-up about any forthcoming designations,” said US State Department spokesman Ned Price, who was asked at a press briefing Monday to respond to the Israeli claim that it had in fact notified administration officials ahead of time of the decision to classify six Palestinian rights groups as terror organizations. (…)

“We believe respect for human rights, fundamental freedoms and a strong civil society are critically important to responsible and responsive governance,” Price added, in what appeared to be a tacit rebuke of Defense Minister Benny Gantz’s decision.

But it was the spokesman’s assertion on Friday that “the Israeli government did not give us advance warning” that set off a firestorm in Jerusalem.

On Sunday, in a briefing to reporters, a senior Israeli official said that a Foreign Ministry official traveled to Washington and notified the US State Department’s Bureau of Counterterrorism of the impending decision and handed it relevant intelligence ahead of Gantz’s announcement.

By condemning Israel, the Biden administration mirrors the stance taken by the United Nations.

The UN Human Rights chief, Michelle Bachelet, called Jerusalem’s move “an attack on human rights defenders, on freedoms of association, opinion and expression and on the right to public participation,” the media outlets reported on Tuesday.

Nothing to see here, just Rashida Tlaib, a member of US Congress, actively shilling for terrorists. https://t.co/2sIaoZKzNl

While the Biden White House is acting shocked over Israeli decision to go after the terrorist network operating under the guise of human rights groups, the Marxist PFLP terror group’s involvement with these six blacklisted NGOs and other front groups has been well-documented.

In a September 2020 article published in the Tablet magazine, prominent Israeli defense analyst Yossi Kuperwasser explained how the PFLP used its Marxist credentials to set up front groups to lure leftwing Western donors:

When the Soviet bloc collapsed, these groups had to find a new cause célèbre around which to unite. The PFLP was among the first groups to understand the potential of recruiting softer anti-Israel elements into its networks and to leverage those elements in order to gain financial support from naïve international donors.

Functionally, the PFLP is an entirely hybrid organization. On the one hand, some of its members (who altogether number in the low thousands) tirelessly promote terror attacks. On the other hand, the PFLP occupies the leading position among Palestinian NGOs conducting the international campaign to slander Israel and deny its legitimacy to exist as the nation-state of the Jewish people (PFLP supports a one-state solution that would abolish Israel). [Tablet; September 22, 2020]

The six organizations claim to be “civil society” or “human rights” groups but are, in fact, an integral part of the Palestinians’ war strategy against the Jewish state.

In many ways, it is these organizations, that do not engage in a physical warfare, that are more successful in the fight against Israel. They pretend to stand up for justice, but in reality act as a frontline to the enemy organizations that seek to destroy the Jewish state. (…)

The most well-known among the six groups is Al-Haq, which calls itself a “human rights organization.” The Defense Ministry had no trouble declaring it as a terror group as its officials are members of the PFLP and are known to have participated in terrorist activities.

The groups were also allegedly recruitment centers for terrorists. However, the physical war against Israel has become a secondary component.

Top Israeli security officials and confirmed that a war is being waged against the Jewish state. These institutions take advantage of the legal system and use psychological warfare and propaganda to achieve their goals [Israel Hayom; October 24, 2021]

In recent years, Legal Insurrection has extensively reported on Palestinian NGOs linked to the PFLP and other terrorist groups that receive millions of dollars in funding from the U.S., European governments. The Jerusalem-based watchdog group NGO Monitor has published extensive research exposing the nexus between the Palestinian rights groups and terrorist outfits.

You want to really support the #Palestinian people and promote peace? Then #SayNoToTerror and don’t #StandWithThe6! pic.twitter.com/SZJHdAdkIz

Last week, NGO Monitor published a summary of its research showing the operational ties between the PFLP and its front groups. “NGO Monitor has identified a network of 13 NGOs linked to the Popular Front for the Liberation of Palestine (PFLP) terror organization and funded by European, and in some cases, other governmental frameworks. As of September 1, 2021, we have also identified over 70 staff and board members and other officials who hold positions in both the NGOs and the PFLP. This document contains information about 36 of those individuals,” the watchdog group disclosed.

In May 2020, the Legal Insurrection reviewed a report titled “Blood Money: European-funded Palestinian NGOs and their terror operatives,” compiled by Israel’s Ministry of Strategic Affairs. It showed how “European aid worth millions of euros going to Palestinian charities and “civil society organizations” was ending up in the coffers of internationally designated terrorist groups.

It’s quite simple. Biden was told but five minutes later he couldn’t recall what he was told.

BIDEN GOT THE HEADLINE HE WANTED

Biden does not care that Israel corrected the record. The correction will get ZERO coverage in the US woke media.

Biden got the headline he wanted and was thereby able to signal his virtue to his Woke masters. Nothing else matters to this Administration. It is prefers STYLE over SUBSTANCE and FANTASY over REALITY.

Oh, and I think I speak for about 150 million other adult Americans who did not drink the Progressive Kool-aide.

Israel should do whatever is necessary to fight terror, without telling Washington in advance, especially with Biden’s foreign policy being rooted in appeasement of terror and dismissive of the fact that Munich and claims of peace in our time led to Auschwitz