Israel’s Ministry of Strategic Affairs: “Terrorist organizations are continuing to whitewash their activities through NGOs.” 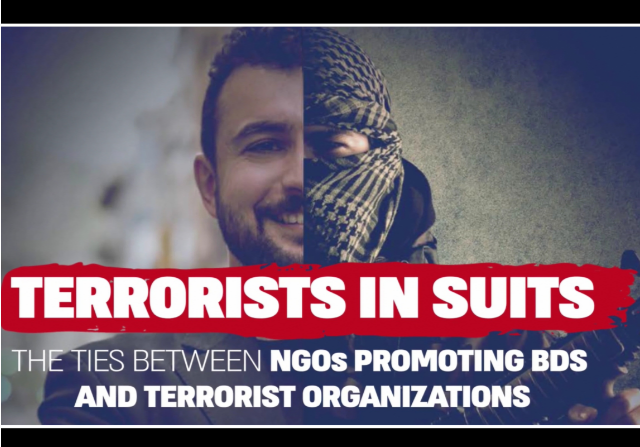 European aid worth millions of euros going to Palestinian charities and “civil society organizations” was ending up in the coffers of internationally designated terrorist groups, the report published by Israel’s Ministry of Strategic Affairs indicates.

The Israeli report takes the case of Palestinian NGO, Addameer, which has well-documented ties to terrorist group Palestinian Front for the Liberation of Palestine (PFLP). Despite its know links to the terrorist group — banned both by the United States and the EU, Addameer received up to 2 million euros in funding from several EU and European agencies, the official reports disclosed.

The 28-page report released on Wednesday “reveals the dangers of the EU’s transfer of funds and the methodology and guises used by terrorists under the cover of civil society organizations,” Israel’s Ministry of Strategic Affairs said in a statement.

Addameer, a primary recipient of EU aid, is led by convicted terrorists, including its board member, Yaqoub Oudeh. He was part of the “member of the PFLP terror cell that carried out the Jerusalem Shufersal supermarket bombing in 1969 in which two Israelis (Leon Kanner and Eduard Jaffe) were murdered and nine others injured,” the report revealed. “Addameer lay leaders and employees play a dual role – human rights activists by day and PFLP terrorists by night,” it added.

One of the best examples of the NGO-terror connection, and the focus of this report, are the ties shared between the European-funded NGO “Addameer – Prisoner Support and Human Rights Association” and the Popular Front for the Liberation of Palestine (PFLP), a USand EU-designated terrorist organization. This case study exemplifies the clear connection between NGOs and terrorist organizations, and the concern that some of the funds designated to such NGOs may have ended up funding terror activities. (…)

Addameer staff, members of its board of directors and general assembly were found to be PFLP operatives, some of which until recently. (…)

By portraying itself as a legitimate NGO, Addameer has been able to raise funds in Western countries, including from European governments. Over the last six years (2013-2019), Addameer received nearly €2 million in European governmental and public funding from Switzerland, Ireland, Norway, Denmark, the Netherlands, Sweden and Spain (Basque Autonomous Community and municipalities). (…)

The PFLP has warned that it is entered significant financial distress over the past few months. In light of such, there is a possibility that the organization will now try, even more than before, to increase its associations with civil society organizations. These include Palestinian NGOs such as Addameer and Al-Haq, which through their various ties to the organizations, may utilize to obtain financial aid. The fear remains that these funds will be transferred to PFLP-related activities. (…)

This report found that numerous members and terrorist operatives have become leading figures in NGOs which delegitimize and promote boycotts again Israel, while concealing or downplaying their terrorist past. Some continue to serve as members of terrorist organizations to this day.

“The EU has given in to the Palestinian steamroller of pressure. Millions of euros that went to Addameer show the real threat posed by the EU decision. This is a dangerous precedent,” Israel’s Strategic Affairs Minister Gilad Erdan said while releasing the findings.

The report urged Brussels to “condition any funding on an explicit declaration by the NGO that it does not have a relationship of any kind with terrorist organizations.” The request should be common sense for EU’s European donors who have suffered several deadly Islamic terror attacks in recent years.

The EU’s actions, however, tell a very different story.

“At the height of the coronavirus pandemic, the EU clarified in a letter to Palestinian NGOs that membership in or affinity to a terrorist organization does not automatically prevent a person from being eligible to participate in EU-funded programs or receive funds,” the report said.

“In the past two years, the Shin Bet [Israel’s domestic] security agency has exposed a number of incidents in which Hamas took control of money belonging to aid organizations that are active in the Gaza Strip, and in some cases used them for military purposes against Israel,” the newspaper Israel Hayom reported on Wednesday.

The revelations highlight EU’s wanton disregard when it comes to terrorism financing going on under the garb of its aid program. Israel repeatedly brought this to Brussels’ knowledge. In January, Israeli Minister Gilad Erdan wrote a letter to the EU foreign policy chief Josep Borrell, urging him to “cease funding” to NGOs “affiliated with terrorist groups.”

Israel’s pleas have gone unheeded. The EU remains the most prominent patron of Palestinian terror-linked charities and activist groups.

“The European Union (EU) is the largest governmental funder for NGOs active in the Arab-Israeli conflict, including some of the most radical and politicized groups,” the research done by the watchdog NGO Monitor shows. “Under the guise of human rights, democracy, and good governance, EU support is transferred to Israeli, Palestinian, and European NGOs that promote anti-Israel BDS.” the watchdog group added.

‘Network of Hate’: Ties between NGOs and terrorism (February 2019)

The EU is about as useful as the UN.
Both should be done away with, pronto.

and both the EU and UN hate Jews just as much as the Third Reich did, and are working towards the same final solution. Just more quietly and deviously. Why hide it, or give them the cover of not talking about the obvious?

Until the PC culture wipes these knuckle-dragging politicians out this will continue.