The DOJ claimed if SCOTUS does not act then the heartbeat law “would irreparably harm those interests and perpetuate the ongoing irreparable injury” to women in Texas seeking out abortions. 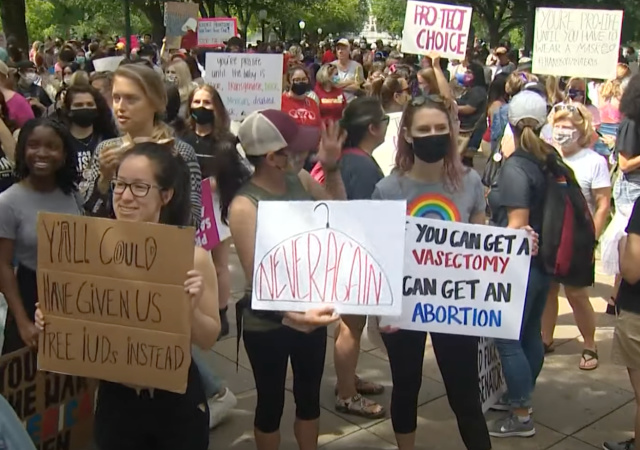 Biden’s DOJ formally asked SCOTUS to block the Texas heartbeat law (referred to as S.B. 8 in the document), which bans almost all abortions after a doctor can detect the heartbeat in the unborn human being.

The United States Court of Appeals for the 5th Circuit denied the DOJ’s emergency request to suspend the law. It issued a longer-term stay after Judge Robert Pittman of the U.S. District Court for the Western District of Texas, Austin Division, temporarily blocked the law.

SCOTUS already refused to halt the law on procedural grounds. The justices did this on an emergency docket.

“The question now is whether Texas’s nullification of this Court’s precedents should be allowed to continue while the courts consider the United States’ suit,” wrote the DOJ. “As the district court recognized, it should not: The United States is likely to succeed on the merits because S.B. 8 is clearly unconstitutional and because the United States has authority to seek equitable relief to protect its sovereign interest — including its interest in the supremacy of federal law and the availability of the mechanisms for judicial review that Congress and this Court have long deemed essential to protect constitutional rights.”

The DOJ claimed if SCOTUS does not act then the heartbeat law “would irreparably harm those interests and perpetuate the ongoing irreparable injury” to women in Texas seeking out abortions.

Officials did not mention the legit constitutional right to life of unborn female and male human beings. Remember, the Constitution does not mention abortion or privacy.

SCOTUS will have to review records and testimony of women affected by the law and infanticide providers. Those providers claim the law has caused them to feel “fear and instability.” They will also hear from providers in neighboring states, which claim women in Texas have flooded their clinics.

The new request asks SCOTUS to hear oral arguments unlike the first time around:

A writ is “meant for rare use,” but which an appellate court decides to review a case at its discretion.” Certiorari means “to be more fully informed.” SCOTUS uses certiorari to choose most of its cases. The “writ of certiorari orders a lower court to deliver its record in a case so that the high court may review it.”

The DOJ acknowledged it is asking a lot with a writ of certiorari before judgment. However, it claims the Texas law trying to stop the murder of unborn human beings justifies its request:

A petition for a writ of certiorari before judgment under 28 U.S.C. 2101(e) is an extraordinary remedy, but the issues presented by Texas’s extraordinary law are “of such imperative public importance as to justify deviation from normal appellate practice and to require immediate determination in this Court.” Sup. Ct. R. 11. The fundamental question presented in this case is whether States may nullify disfavored constitutional rights by purporting to disclaim their own enforcement authority and delegating enforcement of unconstitutional laws to private bounty hunters. S.B. 8’s use of that scheme has already allowed Texas to nullify this Court’s precedents for six weeks. That state of affairs should not be allowed to persist — or spread to other States or other rights — without this Court’s review.

The DOJ said SCOTUS would probably not hear its case this term without a “certiorari before judgment” because the 5th Circuit “will not hear oral argument in this case and in Whole Woman’s Health until early December.” Officials noted they do not know if the court would rule right away.

The DOJ concluded that the law is “dangerous” because God forbid states pass their own laws.

“If Texas is right, States are free to use similar schemes to nullify other precedents or suspend other constitutional rights,” whined officials.

The department wants an answer by Thursday afternoon.

I would love a liberal to show me in the constitution where it mentions killing babies. these are the same low-live losers that are demanding you get the jab.

I would just ask one question, “Show me exactly where in the Constitution it says a woman has a right to abortion.”

Once that can’t be done, I would then declare Roe v. Wade unconstitutional.

Nope. Constitutionality has nothing to do with it. All the SCOTUS has to do is reverse its decision in Roe and return the authority to regulate abortions back to the states where it has always belonged. (And no, it isn’t “settled law” it’s only a poorly decided court case. But law? Nope. That’s what the democrats want you to think.)

The decision claimed it was in “emanations and penumbras” of the Constitution. When you ask them to point it out, they’ll just quote the decision.

To be clear, there are no “emanations and penumbras” in the Constitution but when a huge part of the current political order is vested in pretending they exist, the problem will not be solved by logic.

If the day ever comes when SCOTUS repudiates this dishonest decision, the left will stage riots throughout the country. Then they’ll pack the court, or assassinate half the members, or simply ignore the decision.

They will not allow it to go quietly, which is all the excuse Roberts needed to pretend the decision is legitimate and work to make sure it stands.

At the same time they want to eclipse 2A leaving it in a dark deep hole. Solution… abortion is a tax per Roberts.

Implied in the right to privacy, but the Twilight Amendment (“penumbras and emanations”) is the source of so much more mishchief. Elective abortion a.k.a. planned parent/hood is premeditated murder (one-child, delegated), but unlike other acts of homicide, elective abortion cannot be easily detected. Essentially, the abortion rite becomes legalized if you can get away with it (sound familiar?), and normalized under the Pro-Choice religion (i.e. behavioral protocol). Demos-cracy is literally aborted in darkness.

No one is fooled, many will rationalize it, many more are good Americans, and then there are the secular treats (“redistributive change”).

I suspect the real ox being hired here is, if this state law is not immediately over ruled by federal law, then other state laws the Federal Government does not like may also be difficult to immediately overrule.

Something like their shiny new OSHA reg, that just asserts it supercedes everyone else, because it says so?

I’m really not understanding this. If the democrats are so wedded to the idea of abortions on demand at any stage of pregnancy why do they not simply pass legislation in both the House (they have the majority there) and the Senate (they have 50 +1 in the Senate) and then send it to Biden for signature into law and be done with it. Would seem a whole lot easier than this whole go to the SCOTUS and hope you get the right decision from the court thing.

It positively amazes me that the right of a mother to sacrifice her children is the most important right to the left.

The woman holding the sign If you can get a vasectomy I can get an abortion just failed her analogy test.

Abortion is not the answer. The answer is tubal ligation.

I don’t even know what the answer is other than mayber Abortion.

I think I will go with abortion being the answer for my second question. Abortion kills you in the womb no matter what sex you are.

The male equivalent of a woman’s “right” to abortion is a father’s traditional right, in most pre-Christian European cultures, to inspect each newborn child and decide whether to let it live or to kill it.

Life deemed worthy of life… or not. Anthropogenic selection for social progress. It was never a mystery. Most men and women seem to accept their bundle of joy with an open heart and meet their responsibility to their child and each other with a serious commitment.

A strawclown masquerading as a strawman. Abortion is already illegal when life is deemed worthy of life. At the so-called age of “viability” in a modern frame. A woman does not have an open right to abort her child for social cause.

That said, there is no mystery in sex and conception. A woman, and man, have four choices and still six weeks. Baby steps.

DOJ has no standing, besides the law still hasn’t become ‘ripe’

Democrats: HOW DARE YOU RIP BABIES FROM THE ARMS OF MOTHERS AT THE SOUTHERN BORDER!! MURDERERS!!

Also Democrats: HOW DARE YOU STOP US RIPPING BABIES FROM THE WOMBS OF BIRTHING HUMANS!! WE DEMAND THE RIGH TO KILL THESE UNBORN SACKS OF CELLS!!

That DOJ wants an answer by Thursday is telling. Virginia’s off-year elections (governor, lieutenant governor, and General Assembly) are in two weeks and Democrat enthusiasm is way down while enthusiasm and momentum are on the Republican side for once. The VP’s ad is running the black churches across the Commonwealth and no doubt the “hayseeds want to ban abortion” ads can’t be far behind. A GOP sweep in November would set the stage for a wave election next fall in the midterm elections.

The Supreme Court should simply deny the request or take it up at the same time as argument in the Dobbs case in December.

Update: it looks like it was Justice Alito who set a Thursday deadline for Texas to respond to the Government’s petition for cert before judgment in his capacity as Circuit Justice for the Fifth Circuit. My guess is he will refer the matter to the entire Court for their considered judgment.