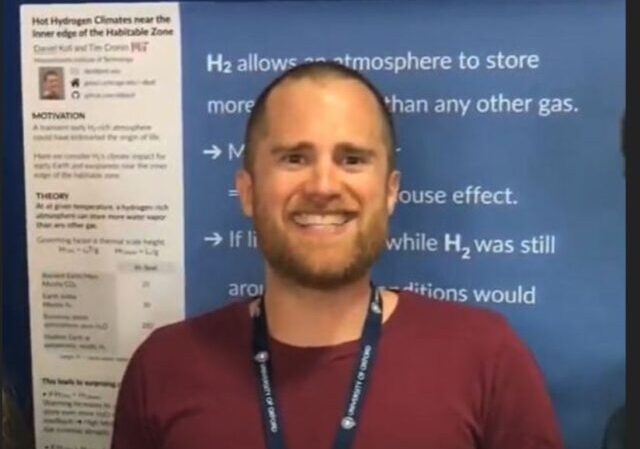 University of Chicago geophysics professor Dorian Abbot was supposed to give a lecture at MIT until the school caved to a campus mob over Abbot’s unwoke views on diversity.

His lecture got picked up by Princeton University instead and thousands of people have signed up for it.

Thousands of people have registered to attend a geophysicist’s remote lecture hosted by Princeton — after MIT canceled his initial one when a woke “Twitter mob” waged a war against him over his views on merit-based college admissions.

Dorian Abbot, an associate professor of geophysics at the University of Chicago, last week slammed MIT for caving to cancel culture after his upcoming public lecture on climate and the potential for life on other planets was axed.

Abbot said MIT told him it was canceling the lecture to “avoid controversy” after students and recent alumni demanded he be uninvited because he’d recently argued academic evaluations should be based on merit.

In the wake of the fallout, Princeton University decided to host Abbot’s lecture via Zoom on Oct. 21 — the same day it was scheduled to take place at MIT.

This is a win for academic freedom.

I'm delighted to report that we've expanded the Zoom quota for Dr Dorian Abbot's Princeton lecture–the one shockingly and shamefully canceled by MIT–and literally thousands of people have registered. It's October 21st (the day it had been scheduled at MIT) at 4:30 Eastern time. https://t.co/sFOPTOxDOZ

Last week, Abbot wrote at the Bari Weiss Substack about the incident that sparked the left’s outrage:

On August 12, a colleague and I wrote an op-ed in Newsweek in which we argued that Diversity, Equity, and Inclusion (DEI) as it currently is implemented on campus “violates the ethical and legal principle of equal treatment” and “treats persons as merely means to an end, giving primacy to a statistic over the individuality of a human being.” We proposed instead “an alternative framework called Merit, Fairness, and Equality (MFE) whereby university applicants are treated as individuals and evaluated through a rigorous and unbiased process based on their merit and qualifications alone.” We noted that this would mean an end to legacy and athletic admission advantages, which significantly favor white applicants.

Shortly thereafter, my detractors developed a new strategy to try to isolate me and intimidate everyone else into silence: They argued on Twitter that I should not be invited to give science seminars at other universities and coordinated replacement speakers. This is an effective and increasingly common way to ratchet up the cost of dissenting because disseminating new work to colleagues is an important part of the scientific endeavor.

Louis K. Bonham of the National Association of Scholars recently called out MIT for their decision:

In today’s cultural moment, cowardly college administrators willing to jettison principles of academic freedom, free inquiry, and free speech rather than stand up to Twitter mobs are, unfortunately, commonplace. Even so, some cases stand out as particularly egregious examples.

Consider a certain soon-to-be-former dean of a major law school, who surrendered to the mere possibility of online outrage, preemptively hobbling the activities of a clinic in the law school’s newly-endowed “First Amendment Center,” while simultaneously pontificating about the importance of free speech in society. Or the dean of the business school at a major university, who within hours of a Twitter mob’s demands defied instructions from the university’s HR department and acted unilaterally to suspend and bar from campus a professor for refusing to grade students differently by race (and then retaliated against said professor after the university ordered him reinstated).

Enter Robert van der Hilst, chairman of MIT’s Earth, Atmospheric, and Planetary Studies department, who has essentially told these candidates for the Most Cowardly University Administrator award, “Hold my soy milk!”—proceeding to throw academic freedom under the bus and surrender to the keyboard warriors in a truly craven fashion.

Congratulations to Princeton for stepping in and hosting Abbot’s lecture. We need more people and institutions to stand up like this.

These people only know hate and division. They are sneaky and underhanded – cancelling those that do not go along with their plans to have society DIE.

It’s good that people are standing against it. It will take a lot to stop it because DIE is a cancer.

Had Dorian Abbot lectured about evolution, and a group of Christians had protested his views on the topic, then huge swaths of American forests would have been chopped down to make the paper to print the Joseph Goebbels media’s denunciations of “violent anti-science fundamentalists”. The internet would slow to a crawl because of the sheer volume of emails and posts shredding all Christians. Every Republican officeholder would be ordered by journalists to distance themselves from the protestors. And the FBI would open an “investigation” on the protestors, their families, their friends, and their internet service providers. And for years afterwards university profs would pontificate ominously about “the dark night of fundamentalist ignorance”.

Fortunately for the self-declared geniuses at MIT some animals are more equal than others. To 99% of the world they look like cowards, but in their own hermetically sealed little bubble they go on in smug assurance of their alleged superiority.

Maybe he can make it pay-per=view.

Maybe tie receipt federal funding to the academy to embracing free exchange of ideas and a commitment to diversity of thought/opinion? They would be free to go the route of Hillsdale and refuse any Federal funding, including Student VA funds if they had similar reservations about federal strings attached to the funds.

Note that both Profs. George and Abbot are members of the Academic Freedom Alliance: https://academicfreedom.org/founding-members/

Membership is by invitation only.

Perhaps they should invite Prof. Jacobson!

“Prof axed by MIT”. What did they axe him and what was his answer?

He had a ridiculous axecent.

If admissions can’t be based on merit, and grades can’t be issued on performance…. why do would anyone need a University degree? It would cease to be worth the paper on which it was printed.

So is Princeton notably free from woke virus, or are they just doing a one-off to stick a finger in MIT’s eye?

You can still sign up for the webinar: https://princeton.zoom.us/webinar/register/WN_aBSONFUDTJGsxHf1NEmSig?t=1633925076390

Today MIT President L. Rafael Reif broadcast a letter about the cancellation incident, which unfortunately was nothing but squishy bullshit.

Some report feeling that certain topics are now off limits at MIT. I have heard these concerns directly from faculty colleagues, alumni and others who care deeply about the Institute.

Let me say clearly what I have observed through more than 40 years at MIT:

Freedom of expression is a fundamental value of the Institute.

I believe that, as an institution of higher learning, we must ensure that different points of view – even views that some or all of us may reject – are allowed to be heard and debated at MIT. Open dialogue is how we make each other wiser and smarter.

And then, the weaselry:

How should we respond when members of our community bear the disproportionate cost of other people’s speech?

It will be essential in this overall process to include the perspective and experience of graduate and undergraduate students; I have asked Chancellor Melissa Nobles to work with student leaders to decide the best way to do so.

I have also asked Provost Marty Schmidt, Chancellor Nobles and Chair of the Faculty Lily Tsai to begin immediately assembling a special ad hoc working group to consider the insights and lessons we should take away from this situation.

So nobody involved here has any actual (much less absolute) principles when it comes to mob censorship of people’s speech… they’re going to “convene a working group” to crowdsource from the mob what their principles ought to be.