LAPD Chief Michel Moore said the attack at the restaurant “appeared to spring from a roving band of vehicles that were seen flying flags within the Jewish-populated areas of Hollywood, West L.A., Mid-Wilshire, West Hollywood and Beverly Hills.” 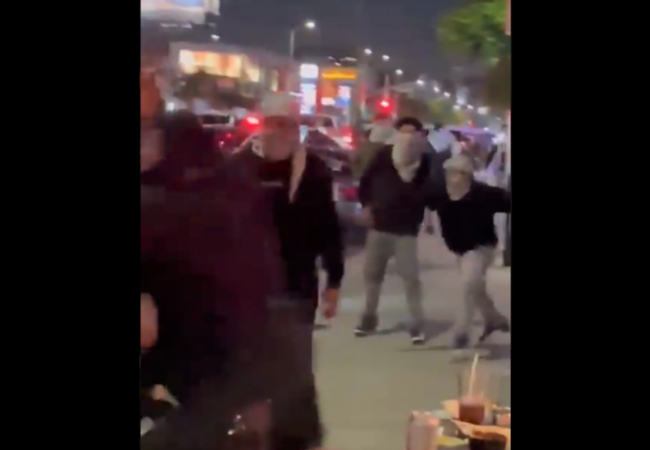 In May 2021, a wide range of attacks on Jews by “pro-Palestinian” street thugs swept heavily Jewish areas of New York City, Los Angeles, and other cities.

We covered many of those attacks, including:

We also cataloged the attacks, List of “Pro-Palestinian” Violent Attacks On Jews In The U.S. and Canada during May 2021:

One of the attacks that received the most media attention was an attack at a restaurant in Los Angeles, VIDEO: “Pro-Palestinian” Gang Seeks Out And Attacks Jews In Los Angeles:

As the sacred Jewish holiday of Shavuot came to a close early this week, shocking footage surfaced on social media of what appears to be an anti-Israel gang’s vicious attack on Jews having dinner outdoors in Los Angeles….

The Jewish victims of the attack are reportedly members of the robust Persian-Jewish community that calls Los Angeles home; witnesses say the attackers targeted them as they paraded through the heavily Jewish area (on foot and in cars), moving from group to group asking who was Jewish. Some clips show the caravan of anti-Israel protesters driving through the neighborhood screaming into megaphones at Jewish passersby.

Moments ago: A group of "pro-Palestine" attacked a table of Persian Jews at Sushi Fumi in Los Angeles, just outside of #weho city. #westhollywood / #LA #Antisemitism masked as #FreePalestine pic.twitter.com/jjdWNqESLO

Xavier Pabon was quickly arrested, as the Los Angeles Times reported at the time:

Xavier Pabon, 30, of Banning was taken into custody Friday night and booked on suspicion of assault with a deadly weapon, the Los Angeles Police Department said in a news release. Detectives will also recommend additional hate-crime charges, they said.

Pabon was released Sunday after posting $275,000 bond and was next due in court Sept. 23, jail records state.

A second man was arrested in connection with an attack on diners outside a Beverly Grove sushi restaurant last week that is being investigated as an antisemitic hate crime.

Whittier resident Samer Jayylusi, 35, was taken into custody around 1 a.m. Tuesday in Anaheim, the Los Angeles Police Department said in a statement.

Now there have been hate crime charges added:

Two men were charged in an assault on Jewish diners earlier this year outside a Beverly Grove restaurant, the Los Angeles County District Attorney said Tuesday.

Xavier Pabon, 30, and Samer Jayylusi, 36, were each charged with two felony counts of assault by means of force likely to cause great bodily injury.

Jayylusi is expected to be arraigned Tuesday at the Foltz Criminal Justice Center. Pabon’s arraignment is scheduled for Thursday in the same courtroom. It was not immediately clear whether they have attorneys….

LAPD Chief Michel Moore said the attack at the restaurant “appeared to spring from a roving band of vehicles that were seen flying flags within the Jewish-populated areas of Hollywood, West L.A., Mid-Wilshire, West Hollywood and Beverly Hills.”

Moore said police are searching for two more people believed to have taken part in the restaurant attack.

Don’t expect any of them to show contrition. They likely will be greeted as a hero in their communities, like one of their fellow thugs in NYC, Waseem Awawdeh Charged In Antisemitic Assault, Vows He’d Do It Again, Gets Hero’s Welcome: 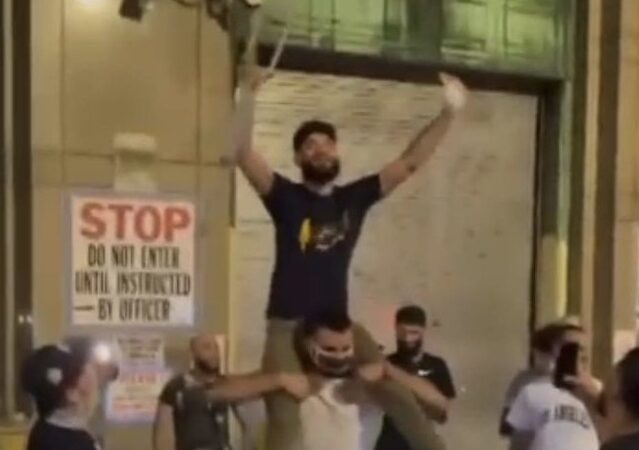 That’s right! This belongs to the democrat party. That’s why Jews should not be democrats.

I’ve said before: many Jews are highly intelligent, Very few are smart; at least not American ones.

I’ve said before: only a few bears are Jews, and those that are, are hightly intelligent.

I only know one and he is pretty smart.

Liberal Jews are more of an existential threat to Jews worldwide than any other force.

I grew up around Reform, and was brought up that way. I walked away from the entire thing decades ago. I grew to despise “my” people.

I went to work one day last week, and waiting for me on my desk were two anti-Semitic hate incident reports.

The bad news: They seem to be increasing.

Those are the facts on the ground. Of course, in this particular case, international current events were used to rationalize the aggression in the minds of the perps.

Sadly, young black males and the mentally ill (not insane, mind you: they know what exacctly they’re doing) are easy to expolit into committing violence.

The good news is they’re now beating on “covid Karens”.

That matches the record in NYC.

With the unlimited importation of more potential perps from around the globe, and the use of a secret algorithm to spread them around the country, Biden has ensured that the past is no prediction of the future.

As an aside, our eldest daughter, who is in the process of converting to Judaism after her marriage to a young Jewish man, lost her job at a prestigious NYC travel firm due to covid. With her newfound free time she has earned licenses as both a nutritionist and a pilates instructor. Now she’s thinking of working towards becoming a physical therapist. She used my wife and me as Zoom students towards her Pilates certification. I enjoyed and benefitted from the workouts.

Given our crazy, increasingly dangerous times, I asked her, only half-jokingly, if she wouldn’t consider also becoming a licensed Krav Maga instructor and find a synergy between the IDF self-defense practice and Pilates and offer clients a combination core-strength-and-mobility-and-self-defense workout.

Ahead of my time? Maybe. My real motivation was to encourage her to learn some practical self-defense techniques.

I worry about my little Jewish daughter in big, bad, dangerous NYC. I probably sound like Trump.

Well, I often ask my daughter, “Who do you think you are, Ivanka?”

America’s future in its citites is dim indeed. Crime will be rampant (if you think it’s bad now, wait till all those unvetted unskilled, illiterate Afghan and Haitian immigrants start jamming into our cities).

The old Charles Bronson movie “Death Wish” was characteristic of what is ahead, only on a level we could never imagine.

Self-defense skills alone won’t cut it against the number goons that will roam the streets in packs. Only being with a group of people knowing self-defense will protect you.

Here’s the list of the Jew-hating scumbags besides Massie:

In Massie’s case, his vote was because he is dead set in principle against foreign aid of all types. If this had been aid to anyone else, you would have seen exactly the same vote.

I wish there were more taking that stand. We have unbelievable deficits and crazy taxes, yet, we seem to be the world’s ATM.

Trump’s demand that NATO allies pay their way was just a start.

Sorry, have to disagree here. Foreign aid is a fraction of 1% of our budget. It’s also among some of the best used money that we spend. It’s WAY cheaper to support our allies with the relatively modest amount of money dedicated to foreign aid than clean up the train wrecks that would otherwise result.

Israel in particular is a solid ally to help with our foreign aid.

The real horrific abuse with taxpayer money can be found elsewhere such as Biden’s 3.5 trillion dollar plan that is 3500 times larger than this re-arming of Israel’s purely defensive missiles that will likely save hundreds of lives. Or taken to its logical conclusion, save thousands of lives because if Israel didn’t have the Iron Dome, it’d have to relentlessly pound Gaza with enormous firepower to stop the missile launches.

it”s called assault and battery. All the fantasy laws, self gratification, and legal clap trap in the world won’t change it.

When did dems start caring about dem on dem violence? Must have involved someone who makes donations.