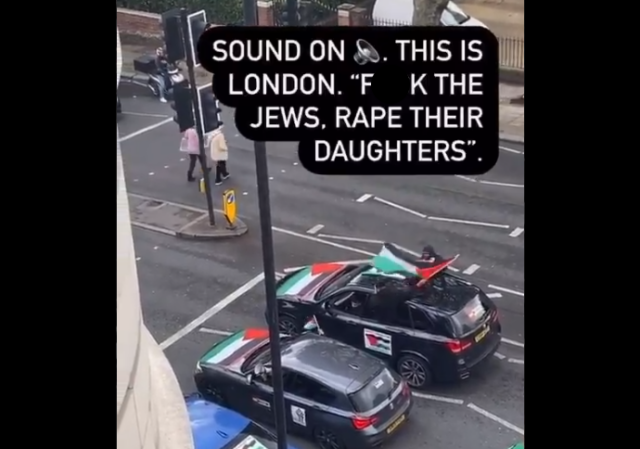 To no one’s surprise, at least no one who has paid attention for the last 70 years, “anti-Israel” inevitable turns into “anti-Jew.”

We saw it throughout the 2014 Gaza war, where protests turned into open calls to kill Jews, such as this 2014 Miami anti-Israel rally: “Jews, remember Khaybar, the army of Muhammad is returning”, referencing the massacre of the Jews of the town of that name in northwestern Arabia in 628 CE.:

History is repeating itself. In London, a “pro-Palestinian” protest motorcade blasted on loudspeakers calls to rape Jewish women. Via Sussex Friends of Israel:

This is in fact what would happen if these monsters ever had the chance.

And this is just the appetiser.

There are millions like them in Europe across Germany🇩🇪 , France 🇫🇷 , Austria, Holland all getting mainstreamed and supported with billions of tax Euros going to NGOs, media and CSOs.

What the SS failed to do, a judenreines Europa , the regressive left is achieving.

Similar things are happening across Arab neighbourhoods all over Germany 🇩🇪 .

and horror when Muslims act out their antisemitism.

Merkel too btw . She is no “leftist”.

German Social Dem President Steinmeier is a champion of Islam and Muslims. He even dumped a wreath on Arafat’s grave .

Out of one side of their mouth they call for peace.

What we learn from this: Enter into a truce with animals like this and five minutes later they will stab you in the back.

What we find reported in the media: Hey these fine folks would make good refugees to bring to America

The tide of public opinion, though, is turning toward Israel and against these savages. From all over the world.

It doesn’t “turn into”. It always was. Antisemitism has always been the only reason for a non-Jew to oppose zionism.

See, Milhouse, when you make an intelligent comment, as you often do, not prefaced with ” you flicking idiot”, you get upvoted..

I think the term ‘zionism’ is interpreted differently by different people. For instance I would not say I support zionism even though I do defend Israel’s right to exist and to defend itself.

To me zionism is extremism. I’d much rather Israel abandon its apartheid Nation State law and be a true democracy.

This is in fact what would happen if these monsters ever had the chance.

It is what has happened whenever they did get the chance. The atrocity stories from the 1948 war are horrifying, and all one way. (The only supposed Israeli “atrocity” was the fictional massacre at Deir Yassin, the story of which was based entirely on the Arabs’ fantasies of what they would have done in the Jews’ place.)

So do at least some Israelis, which is why Waltz with Bashir exists.

To be Pro Palestine takes a willful effort at deception. Mostly self deception. For an honest moral person to advocate killing innocents for the advancment of a political cause and pretend morality subverts true religion.

They treat each other the same way.

They are a quallsome lot. There is a reason that NO ONE likes or wants them in the Middle East.

Were I a Jew in Europe I would have long since gone to either Israel or the US. The European historical record on it’s inability and unwillingness to end persecution is ample evidence of the need to flee.

People like this are why we need Israel to exist.

I wish that we would take care of crushing Iran, while Israel is thaing care of Arabs squatters in Palestine. We really owen Iran an ass kicking + compounded interest.

Such rabid hatred would never be quenched with just “from the river to the sea.” It would then become from one end of the Western world to the other, and then the entire world.

What say you celebrity and media advocates of the original #Me Too movement? Does your concern include #Them Jews Too?

Rabid diversity (i.e. color judgment). It’s not some, select Jew Lives Matter, but rather all Jew Lives are at risk.

#MeToo #HerToo #SheProgressed A feminist come masculinist ideology. There is only one and they are highly ethical.

“Rape their daughters.” They demonstrate their lack of humanity in ways that very few can equal.

Free Palestine or… and we’ll pursue transnational, multidecadal terrorism, wars without borders, and stage a coup without cause, perhaps in Jordan, then return to rape-rape the Jewish girls and abort the Jewish boys.

Just watched the Face the Nation interview with Netanyahu.

The line of questioning was embarrassing. Every question had an accusatory tone. The usual “What do you say to (typically favoring Palestinians or downright anti-Israel on this issue) such and such group’s/politician’s/NGO’s statement that Israel’s actions are disproportionate/causing collateral casualties, etc?”

It’s mind numbing. How often do you see any other country criticized and second-guessed like this reacting to an attack on their sovereignty?

The media’s sudden concern for Palestinian civilian casualties is akin to its selective concern about the violent deaths of blacks in this country; it’s media wall-to-wall coverage and crocodile tears in the extremely rare instances of black deaths as a result of the questionable use of deadly force by the police. But the staggering average weekly 100-150 black-on-black homicides in this country? The media have no interest in that phenomenon. Just like they have no interest in the Palestinian civilian deaths at the hands of Hamas both directly and indirectly.

Unwarranted American black deaths at the hands of police vs. black-on-black homicides? There is no comparison. Any attempt to make the two even ever-so-remotely equivalent is absurd, try as the media may. The same goes for Palestinian civilian deaths at the hands of Israeli forces vs. the deaths and hardships of Palestinian civilians due to Hamas and its ilk. How much foreign aid have they received and wasted on weapons and tunnels?

And lo and behold, suddenly the destruction of a single building is a huge deal, unlike the $2 billion in property damage done during the BLM riots.

Putting aside the question of “Why was the AP basically roommates with Hamas in that building?”, not only did the destruction of the building not cause as much as a scratch on a single journalist, not a single person was killed. The thing came straight down. It was like a meticulously planned demolition to spare other structures in the neighborhood. And this after Israel warned all in the building to vacate.

Hardly the actions of a reckless, bloodthirsty response to relentless missile attacks.

If someone not nearly as strong as you violently attacks you, it’s not your fault you are strong. It certainly does not make you the bad guy. But, although stronger than your attacker, if you don’t react, you will be in danger.

But the “international community” and the preponderance of the world’s media don’t see it that way. We live in crazy times.

Yes, so true. Bibi was brilliant. Stalwart against such blatant overt hostility.

Most other heads of state would fold like cheap tents.

It’s not a coincidence that every headline from left wing media reads as “Israel ground ASSAULT” or “ATTACK”; it’s never “in a DEFENSIVE tactic” or some other non-bias wording. And all they are doing is stirring up hate; and of course never take any blame for what happens next. If you have any “progressive” Democrat, head in the sand, Jewish friends or family; remind them what is at stake and that actions/ and non-actions have consequences.

These are the people BLM voluntarily welcomes and joins with using “Intersectionality” as an excuse.