“We all have a role to play in this issue, and the regional approach is the correct approach. It is impossible for Panama to solve it on its own.” 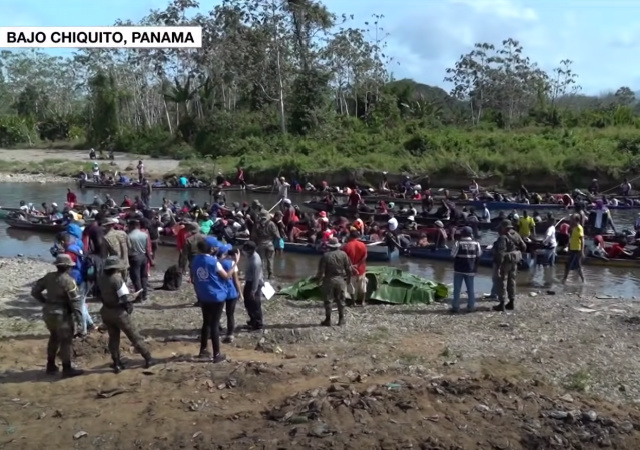 Panama Foreign Minister Erika Mouynes told Axios she is “frustrated” Biden’s administration feigned surprise when the tens of thousands of Haitians ended up at the border.

Last week, Del Rio, TX, saw over 12,000 migrants, mostly Haitians, under a bridge at the border.

The migration caused waves, but Biden’s administration tried to deflect by pouncing on a photo that makes it look like a border patrol agent whipped a migrant. It was false, but the left and liberal media used the image to alleviate the heat on Biden and his cronies.

Mouynes said the country has warned many leaders since the beginning of 2021 about the Haitian wave: “We’ve engaged with every single authority that we can think of, that we can come across, to say, ‘Please, let’s pay attention to this.'”

Panama believes it will see 27,000 Haitian migrants this month through the dangerous Darién Gap, which is more than it saw in all of 2019.

This video came out six months ago, but it explains the dangers migrants face in the jungle.

Over 85,000 Haitian migrants have made their way through Panama since January. Data shows 20,000 to 25,000 already made it to the border. The Biden administration allowed a lot of them to stay. Mouynes believes another 60,000 will start the journey soon.

Mouynes could not believe the U.S., Mexico, and Canada finally met in August “to discuss the issue of irregular migration.

Central America and South America officials have worked together for a while to handle migration:

Panama has a quota system with Costa Rica and has started one with Colombia. It “needs to turn back toward their other neighbors — to Peru, to Brazil” — to set up similar systems.

What they’re saying: “We all have a role to play in this issue, and the regional approach is the correct approach,” Mouynes said. “It is impossible for Panama to solve it on its own.”

Mouynes met with DHS Secretary Alejandro Mayorkas and Congresspeople in Washington this week to help devise a plan since the migrants will head to the U.S.-Mexico border.

The foreign minister demanded that Mayorkas or someone near his rank “attend a follow-up meeting with cabinet-level leaders from the region.” She wants the U.S. “to show commitment.” This will also help the U.S. and other “nations to follow through on migration plans.”

Axios reported that the Haitian migrants usually receive medical care and food when they reach Panama, even though they traveled through Colombia and Peru.

Mouynes said: “When we receive them on the Panamanian side, they’re malnourished. The children are in terrible condition, so even getting them up to a healthy state takes time.”

Who hauled them from Haiti to central America? They certainly didn’t swim.

Do, do that voodoo that you do so well.

Why have them cross the border under a bridge in Del Rio Texas? Why not just have the buses take them right on through the border on the main road at a border crossing? Tell the boarder guards to look out for the buses and wave them through when they get there? Tell the bus drivers to keep going till they get to Chicago.

Bus them all to Joe Biden’s house in Rehoboth Beach, Delaware. Joe could use the company. He gets very lonely hiding out in his basement.

No border = No country.

Enough of this shit

This could be an opportunity to repopulate Wisconsin and Michigan.

Michigan is already being repopulated by Muslims.

So the news is out now, eh?
Open your front door, shush the kids, and listen hard.
Can you not hear Kamala/Biden screaming “Don’t come! Don’t come!” all the way from Washington DC?
I know I can.

How do impoverished migrants end up on Charter planes? So some Soros or Gates or fuck all type like Branson pays for one flight for these people and expects governments to pick up the rest of the tab for their little nonchalant “throw a token” antics…just so the arrogant aristocracts can act high and mighty while playing both god and kingmaker?

If we catch one of these bastards in the act, I hope they hang for treason.

My sources in Panama allege that theChiComs are behind this ny covertly fuinneling money to charter flights bringing the Haitians to Co,umbia where they are forced to cross over the Darien, which is one of the most inhospitable areas on this planet earth. Hundreds are dying on the trek through the jungle and arrive in Panama near death. The Catholic missions give them food,clothing and send them on their way North. The Panamanians will not allow them to remain for more than 10-14 days. When they arrive at the Costa Rican border the Ticos put them on buses and send them to Nicaragua.