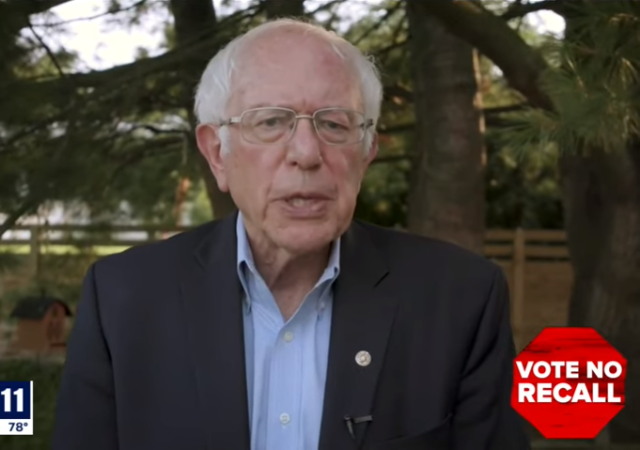 Democrats are worried about Gavin Newsom’s chances in the upcoming California recall election. So far, they have deployed Elizabeth Warren to help, and even Biden and Kamala Harris have been involved.

Now they’ve tapped Bernie Sanders for an ad. They are basically attempting to rile their base and get out the vote.

Bernie uses the same language that Elizabeth Warren used, describing this as a Republican “power grab.”

Senator Bernie Sanders (I-VT), a self-proclaimed socialist, went to bat for embattled California Governor Gavin Newsom (D-CA), who currently faces a recall effort. The disgraced governor’s vulnerability will be put to the test of September 14 when voters head to the polls and decide his fate. The recall effort stemmed from Newsom’s tyrannical COVID restrictions that he was caught violating on multiple occasions. Voters will be given two questions on the ballot, asking whether or not to recall Newsom and which GOP candidate to replace him with.

Democrats are coming to Newsom’s rescue, and Sanders called the recall election a “power grab.”

“At this unprecedented moment in American history, when we’re trying to address the crisis of climate change, guarantee health care for all, and pass real immigration reform, the last thing we need is to have some right-wing Republican governor in California,” Sanders says in a video stumping for the embattled governor. “The September 14th recall of Gov. Newsom is a bold-faced Republican power grab. Don’t let it happen.”

Note how Bernie won’t even say Larry Elder’s name, instead describing him as “some right-wing Republican.”

Sen. Bernie Sanders: "The last thing we need is to have some right-wing Republican governor in California. The September 14th recall of Gov. Newsom is a bold-faced Republican power grab. Don't let it happen." pic.twitter.com/ZSzkkiuIM4

One of the interesting aspects of this recall is that Latino voters, a huge voting bloc in California, could deliver Newsom’s undoing.

With two weeks of early voting left before the California recall election, Democrats are tracking a worrisome sign for Gov. Gavin Newsom and the party at large — the governor’s relative weakness with Latinos.

California is so solidly Democratic that it would take a near-total Democratic turnout collapse for Newsom to be recalled. But Latinos across the country shifted incrementally toward Donald Trump in 2020, with headline-grabbing defections from the Democratic Party in Florida and Texas in particular. Now, polls suggest this once reliable and fast-growing voting bloc for Democrats is softening on Newsom, even in this heavily Democratic state. It’s a reminder that Latino support for Democrats is not a given.

If the trend holds, with even a small segment of the Latino electorate embracing the GOP, it may spell disaster for the Democratic Party — and not just in California this year. The party in power typically suffers losses in midterm elections, and Democrats will need a robust Latino turnout in 2022 to protect its narrow majorities in Congress.

We will know for sure in about two weeks.

An old grifter who hasn’t worked a day in his life? That’s who is going to “save” him? LOL

Actually sanders has worked a number of jobs including teaching and carpenter before being elected as mayor in the early 80’s before going for Congress and the Senate.

You clearly know nothing about the man

Another thing often glossed over. When he was elected mayor, he had his staff look over the various city contracts. In many cases, the city was paying more per roll for case lots of toilet paper than a grocery shopper would pay for a single roll at the supermarket. Vehicles were being purchased for inflated prices.

Other excesses were discovered, and he got a lot of that taken care of.

I, for one, don’t have the time of day for Sanders, but when credit is due, it should be given.

“The last thing we need is to have some right-wing Republican governor in California.”

Could you imagine the impact on the USA of a national shortage of wildfires, droughts, paroled murderers, hobo towns, illegal aliens, government-sanctioned shoplifters, race-baiting congresswomen, anti-rights pay-to-play sheriffs, and especially San Francisco’s beloved needle-frosted street s*t, immortalized by no less a luminary than Frank Sinatra (in “I Left My Shart”)?

Iowa, for one, would be driven to its knees within a year.

I think you meant Tony Bennett

Newsom is probably working overtime to dodge the dreaded Obama endorsement. Kiss of death every time.

What about the millionaires and BIllionaires Crazy Bernie?

By Bernie’s standards that could describe Newsom too.

Because everybody knows only Democrats are allowed to stage “power grabs”, in their parlance meaning stolen elections.