Elizabeth Warren Now Trying to Save Gavin Newsom From Recall

Elizabeth Warren Now Trying to Save Gavin Newsom From Recall 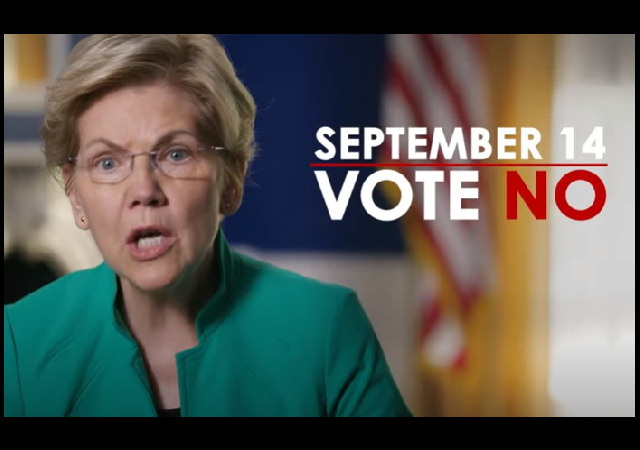 It’s been quite a while since we’ve checked in on Senator Elizabeth Warren. She hasn’t been up to very much since her failed run for president in 2020.

Now she is lending her voice to the effort to save California Governor Gavin Newsom from being recalled because there’s nothing Warren loves more than anything that can draw her focus away from her job in Massachusetts.

Do you think Democrats are starting to worry about Newsom’s chances? It sure looks that way.

Jeremy B. White reports at Politico:

The Warren-starring spot is hitting the airwaves three weeks before ballots start landing in California voters’ mailboxes. The Massachusetts progressive warns that “Trump Republicans” who have been “attacking election results and the right to vote” are “coming to grab power in California,” before urging Californians to stymie conservatives by voting against the recall.

“Vote ‘no’ to protect California and our democracy,” Warren says.

This is not the first time Warren has played a public role in the anti-recall campaign. She has condemned it on social media and signed fundraising missives from the Newsom campaign.

But Warren’s appearance in a homestretch spot both demonstrates the recall’s national dimensions and underscores the risk to Newsom that unenthusiastic Democrats will not vote.

It’s hilarious that Warren claims “Trump Republicans” are attacking election results, considering her party did that for four solid years under Trump.

That claim also ignores the fact that many Democrats and independents are also opposed to Newsom.

Newsom’s newest claim about the recall is that it’s the fault of right-wing media.

On Monday, Newsom was a guest on “MSNBC Reports” to discuss the upcoming recall election. MSNBC anchor Ayman Mohyeldin used the subject to bring up Newsom’s COVID-19 policies which he admitted were “a driving force behind the recall effort.”

“Let’s talk about the intersection, if we can, of COVID and politics for a moment. You’re handling of the coronavirus, sir, has been a driving force behind the recall effort,” Mohyeldin said. “And what do you attribute those 25% that have remained unvaccinated. What do you attribute that to in your state?”

Newsom blamed the number of unvaccinated citizens primarily on “overwhelming majority of misinformation by right-wing pundits.” However, he also added that these pundits are the same people behind the recall efforts in California.

“Well, overwhelming majority of misinformation by right-wing pundits, period, full stop. Time to be a little bit more specific….There’s been a right-wing talking point here and it’s overwhelmingly coming from certain networks and it’s having an impact on getting this disease behind us….And including, by the way, the folks that are behind this damn recall in California,” Newsom said. “These are the exact same people describing mask covering to the equivalency of the Holocaust, it’s the same folks. So, look, you’re right, those things are connected, at least in this state.”

Here’s hoping that Gavin Newsom joins the ranks of Gray Davis in September.

Yeah, because that’s who I would want riding in to my rescue.

When I grew up, it was the Cavalry who came to reinforce you in a battle against Indians. Now, the world is upside-down.

Dude how old are you? Tell me your secret to long life stretching from a childhood spent on the Western frontier until the 21st century!

When I grew up, Han shot first. But actually, that was long ago, in a galaxy far away.

Liberal Playbook: Once you have power never give it up.

Fauxcahontas to the rescue? Newsom is doomed.

Newsome is going to annouce that he is related to Warren and is 1/1332 Cherokee. He fondly remembers that his moma alway told him that he had high cheek bones. That and the Pow Wow Chow cookbook will be enough to put him over the top.

Better yet: he’ll claim he was the only politician in California who didn’t get sexually serviced by Kamala Harris in exchange for a job.

If he claimed that he’d be lying.

Warren is very adept at gleaning data from exhaustive research. This should help bring some order to the chaos Hair Gel finds himself in.

Elizabeth Warren was a Speech Pathology major in college before getting her law degree from Rutgers. Hardly the resume of an intellectual

She is an expert on genealogical data though. She figured out the precise percent of Indian blood coursing through her blood to the 100th percentile. I believe she determined that she was 99 44/100 white.

But does she float?
(All other archaic lore would imply she does.)

Hokumhauntsus always reminds me of the “mother-in-law from hell” that I would meet in the 9th circle in the Inferno. Hopefully, she convinces those on the fence to vote “yes”.

Will they roll out (literally) Hillary next?

That would be the only way to get her out—-put her in a colorful pantsuit and roll her out like a great big Easter Egg with aides supporting both sides to keep her from cracking up.

The popular election of senators

The granting of voting rights to dizzy dames

Injun liar would not do well in California. Yet, she persists in sticking her nose into things that have nothing to do with her, much less Massachusetts.

I live in Massachusetts and am greatly ashamed of her and for her. Since I did not elect her, the best I can offer is an apology to America on behalf of the few conservatives who live in this communist enclave.

No one deserves Elizabeth Warren. Only a state that has produced Kennedy trash for generations could warrant such a fraud.

Warren’s usefulness was in pushing the Overton Window to enfranchise bigger wackjobs, like Ayanna Presley.

So true Henry – Ayanna is a true looney. Real embarrassment to MA. Only a handful of congressional districts in the USA could elect such a thing.

Interesting. Warren says the recall vote is led by those who oppose the right to vote. Logic has never been her strong suit, but … wow!

She’s even more unpopular with Democrats than the ho. Good luck with that, Gruesome!

I’m living in the People’s Republic of California–and even if the state is 99 and 44/100ths percent Democrat, we don’t need no steenkin Princess Spreading Bull to stick her danged nose in our affairs.

Strange your Peoples Republic of California resembles The PRC of China? Could it be that Ca. is in need of a voting audit as well??

I’ll bet famed critical clown theorist James Lindsay will have something to say about this.

This just in: “Newsom blames recall campaign on ‘wreckers, hoarders, right-deviationists, and agents of British Intelligence.'”

How Newsom blew it when he had it so easy is on the BidenHarris scale.

Hopefully the Ds are pushing themselves too far by tying together “anti” vaxxers with Trump supporters. In reality, there are plenty of people on BOTH sides who are saying “no thanks” to the idea of being injected with an experimental shot that lacks long-term safety data and for which the manufacturers enjoy 100% immunity from liability.

It’s not a R vs D, Left vs Right thing – it’s about freedom of conscience, bodily integrity, the Nuremberg code, the overreaching iron fist of Big Government… and so much more.

In a nutshell: 1) THEY want POWER and CONTROL, 2) there are those of us who RESIST this tyranny, and 3) therefore THEY HATE US.

The Democrats are pushing a false narrative for a reason. They want their people to be angry at the “vaccine resisting” Trump Supporters, and anger motivates people to vote. Remember, the Republicans are energized to vote and Biden’s voters are complacent after he won. The Rats need to motivate their side, and personal anger accomplishes that goal.

Dark smoke signals from the camp of Fauxahauntus, the daughter of Sitting Bullshit.She in teepee putting on war paint.

She cry much tear, and prays that Great White Bai-Denh come down from Great White House, give much wampum to ILLEGAL ALIEN voters, make-um vote Democrat….

Fly back to your cave, you old bat.
.

If Newsom loses the recall, can he simply resign before the vote is certified (making the Lt. Gov. Governor) and keep the governorship in the Democratic Party?