Alexandra Souverneva is charged with felony arson to wildland. Authorities suspect she started other fires, too. 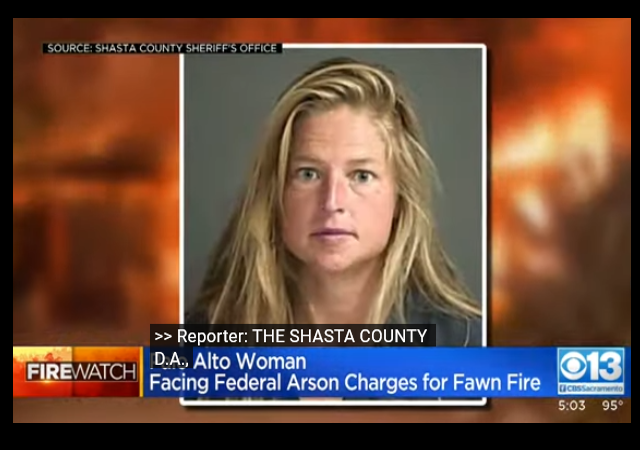 Legal Insurrection has covered a wide array of stories related to eco-terrorism, both initiated by Israel-hating terrorists and those conducted by capitalism-despising green justice activists.

A forestry student allegedly started the blaze, which means it will likely get added to the list of eco-terrorism events.

A former forestry student-turned-shaman and yoga teacher has been charged with starting a huge California wildfire that has destroyed 41 homes – and was being investigated in connection with other fires – after claiming the blaze was triggered accidentally while she tried to boil bear urine so she could drink it.

Alexandra Souverneva, of Palo Alto, was charged Friday with felony arson to wildland with an enhancement because of a declared state of emergency in California, Shasta County District Attorney Stephanie Bridgett said. The 8,500 acre blaze the 30 year-old is accused of starting has wrecked 41 homes, and 90 other structures.

Souverneva pleaded not guilty but could face up to nine years in state prison if convicted. She is also suspected of starting additional fires in Shasta County and throughout the state, Bridgett said. It wasn’t immediately known if she has an attorney who could speak on her behalf.

Souverneva was discovered when she got trapped in the brush amid the inferno and had to call the fire department to help her. Authorities found a great deal of potential evidence.

She was asked to empty her pockets and fanny pack — which had CO2 cartridges, a cigarette lighter and an item “containing a green, leafy substance she admitted to smoking that day,” according to Cal Fire officer Matt Alexander.

Workers at a nearby quarry reported seeing a woman toss two small CO2 cartridges that matched the ones found in her bag on the same day the Fawn Fire ignited, Alexander said in court documents.

On her LinkedIn, Souverneva lists “shaman” as her current occupation and indicates that she was a doctoral student at SUNY’s New York College of Environmental Sciences and Forestry.

An attorney for Souverneva told her initial court hearing that she’d made statements to law enforcement that indicated a possible mental health crisis “or something to do with drug abuse.”

“She is also under suspicion for starting other fires,” said the attorney, who was not identified by the paper.

Alexander said in a report that “there is a high possibility she is responsible” for a fire the previous evening, too.

“It is my experience that arsonists … will light multiple fires in a short timeframe,” Alexander said, according to the paper.

Fortunately for the local residents, the Fire Department has had a break in the weather and they are making progress on containment.

Lighter winds and cooler temperatures slowed the Fawn Fire as it moves toward the shores of California’s largest man-made lake and away from populated areas north of the city of Redding, allowing crews to increase containment to 35%, the California Department of Forestry and Fire Protection said in a statement.

The fire at one point threatened 9,000 buildings, but the number dropped to 2,340 on Sunday.

Light rain was in the forecast for Monday. Fire officials said crews will begin taking advantage of the calmer weather to conduct back burns near the lake to expand the control lines, the Record Searchlight reported.

“We’re going to hold it. It’s going to be done this week,” Bret Gouvea, chief of CalFire’s Shasta-Trinity unit, said at a community meeting Saturday night.

When the media pounces on wildfires in California, Australia, or elsewhere as proof of global warming, it would be worthwhile knowing exactly how many of those fires began as arson.

It was not an accident. She is 🦇💩🤪 and almost certainly set this wild fire on purpose.

My question is, how did she get the bear to pee in her cup?

“According to the Daily Mail, she said during questioning that she had found a puddle containing bear urine and attempted to light a fire to boil the liquid.

However, she claimed that she could not light a fire, so drank the liquid anyway and went on with her hike.”

And the fire she couldn’t light destroyed 41 homes?
Talk about an overachiever. OSU Portland should give her an honorary Antifa doctorate.

How the hell did she know it was bear urine? Hopefully the investigation will include some kind of taste, blind taste test, to see if she can in fact identify bear urine from urine of other sources.

This is an excellent example of a PhD candidate in the environmental studies arena. How can we be expected to take them seriously?

Does a bear p!ss in the woods?

How the hell much must the ground be saturated in order for urine of any forest species to form a puddle?

Well it depends since it’s calculated differently in metric vs imperial. But you would have to be a forestry student to know all the particulars.

“My question is, how did she get the bear to pee in her cup?”

Here is my sarc answer:

Obtain one bear who has just drank water
1. Sedate with marijuana
2. Procure 6ft catheter
3. Insert one end into bear and one end into 50 gallon drum
4. Use dipper to place desired amount of pee into pot and bring to a boil being careful not to set nearby houses on fire
5. Cool to 100 degrees
6. Pour 8 oz into tea cup
7. Add sprig of mint and enjoy

She told me she was a urologist

Did she ask for a specimen of grizzly bear urine?

She bearly got one.

Yes, and that I was bruin some up special. Italian recipe and it would be ready in a moment orso.

You could bottle and sell that to forestry workers. It would get USDA approval because it would prevent forest fires.

UserP is short for One P!ssed Off User, but you may call me UserPee if you like.

She is a sha-woymn, so she used her mojo to cajole that bear

There’s no need to read any further. Just put her on a mental health eval and watch what happens.

Speaking of a mental health eval, I’ll bet you ten bucks the president of the United States could not pass one.

Definitely, she needs a psych evaluation.

What a target rich environment.
A doctoral student in forestry who doesn’t know how to use a “fire ring.”
A BluAnon shaman.
Multiple fires (suspected) and an excuse that doesn’t explain it.
Sinsemilla with a bear-piss chaser.
All of the above wrapped up into one overarching punch line:
“Smokey The Bear says, ‘Doctor… it burns when I pee.'”

If Tracy Stone-Manning goes down as the prospective director of the Bureau of Land Management, Biden has a new nominee.

My guess is that she should spend the next 40 years in prison. She should not be allowed to procreate.

Procreating would not be a problem for a drink of bear urine a day keeps the fertility away.

Somewhere is one proud set of parents.

Sounds like she just misplaced her vape pen earlier in her “trip.”

They huff them like teenagers use to huff glue or gasoline.

Reminds me of the wolf in the children’s story, “I’ll huff and puff and vape the shit out of your straw house.”

Guessing those were nitrous oxide cartridges. Those would act about like pure oxygen if tossed into a fire.

Woman walks out of the fireline seeking assistance from firefighters. Says she was hiking to Canada(!) and got dehydrated.

Didn’t she realize that someone hiking in the desert needs to pack a minimum of two gallons of bear urine per day?

Come on, man! Not another 30 year old ‘student’ trying to use the old bear piss excuse.

Are we all going to just pretend that anyone can pick up ‘Bear Urine’ at the local Dollar Tree?

The local Tractor Supply, maybe. That stuff would really scare the deer away from your garden.

A perfect democrat candidate for Congress. Maybe she can get an animal abuser to make her a dress with “PETA” written on her ass, a la AOC.

Or “P!ss on Rich People”

Since the 70s the overall IQ has dropped and these people are the reason why.

Low IQ is one thing. Character is another.

It would appear to be a double whammy since both are involved.

Maybe it was the bear from “God’s Own Drunk” and she enticed him with moonshine.

Her sentence should be nine years for each fire she started with no parole.

Bear urine? And California has such great white wines! Sad.

They all taste the same after the first few glasses.