Another attempt at eco-terrorism 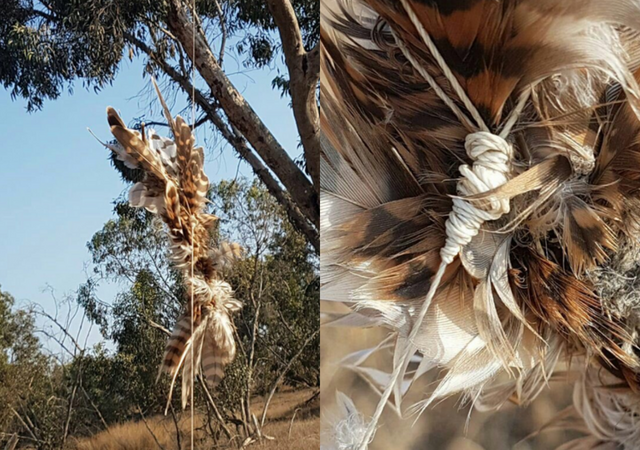 Monday, COGAT Israel, the body responsible for the Coordination of Government Activities in the Territories posted pictures of a falcon saddled with flammable material found near the Gaza strip.

A falcon attached to a rope with flammable material was found today near the Gaza Strip. Arson fires have been caused by incendiary materials flown from Gaza into Israel. Apparently it’s not enough to destroy nature with kites, now falcons are being used for terror as well. pic.twitter.com/j6noxwCwqS

Recently, Israel has experienced an uptick in ecoterrorism. Gazans have used fire kites and fire balloons to decimate portions of Israel, including the country’s nature reserves.

I blogged in June:

During Gaza’s ‘March of Return‘, fire kites were used to start fires in Israeli fields, but as the Times of Israel reports, “a new arson tactic has been gaining popularity along the Gaza border. Instead of kites, a different children’s toy is being flown into Israel: helium balloons.”

Just this weekend, Gazans vowed to step up fire kite attacks. From the Times of Israel:

A group of young Palestinians who have been launching incendiary kites and balloons into southern Israel threatened to step up their activities on Sunday, after several of their number were injured in Israeli airstrikes earlier in the day.

The self-styled “Sons of Zouari” said they would conduct a “high-quality response” against Israel in light of the military’s increasingly forceful retaliations for the Palestinian group’s airborne arson attacks, according to information shared on Palestinian social media and a source, who asked to remain anonymous.

The first of those strikes occurred around noon, east of the Palestinian town of Beit Hanoun in the northern Gaza Strip. According to Palestinian media, one person was injured in the airstrike.

The Israeli military confirmed it conducted a strike, saying the Palestinians who were targeted were members of the Hamas terrorist organization, which rules the Strip.

The second came just over an hour later, in the southern Gaza Strip. No injuries were reported.

The third occurred shortly after 5 p.m., again east of Beit Hanoun. The spokesman for the Hamas-run Gaza health ministry, Ashraf al-Qidra, said two were wounded in that airstrike.

Such airborne arson attacks have sparked numerous fires throughout southern Israel since April. According to Israeli officials, the practice began on a small-scale basis and was then quickly adopted and encouraged by Hamas.

Prime Minister Netanyahu is out of grace for the airborne arson attacks. Times of Israel ctd:

Prime Minister Benjamin Netanyahu on Sunday reiterated that Israel would not tolerate the continued kite and balloon arson attacks that have burned tens of thousands of dunams of forests and agricultural land, including at least six fresh fires started on Sunday.

…“It’s important to emphasize that we have no intention of tolerating this — not rockets, not kites, not drones — nothing,” he said at the start of Sunday’s cabinet meeting. “I hope that Hamas has drawn conclusions, and if they haven’t, they will need to pay a heavy price.”

And of course, PETA will applaud this activity, as long as only Jews are being killed !!!! ABJ

No, it won’t. PETA will condemn this dastardly terrorist attempt on the life of an innocent falcon, just as it did the donkey bomb about ten years ago. As far as PETA is concerned killing Jews does not excuse endangering animals; Hamas will just have to kill Jews some other way.

Yes, I certainly do. PETA protested the donkey bomb; that should be enough proof that we can expect them to protest this too.

i find that Israel supplying Gaza with ANY supplies ridicules.

Well the Jews in the U.S. vote for socialism and gun control, so it makes one wonder if there’s such a thing as a “suicide gene”.

they will need to pay a heavy price.

But until they actually do, there is absolutely no downside for them in these attacks.

Incinerate ten times the area which has been burned with fuel air bombs dropped on populated areas, thereby preparing them for annexation. Thermitic weapons are a great way to get rid of vermin.

Has napalm been outlawed?

It is a war crime for Hamas, not in uniforms, hiding and attacking from civilian areas. IDF could legally strike suspected Hamas positions and the collateral damage would be unfortunate. It is already a war crime for Hamas to be attacking civilians in Israel. Napalm is legal for use against military targets.

Israel can legally strike known Hamas positions, so long as the force used is proportional to the expected military gain. It can not legally do as “JusticeDelivered” proposed, which is to deliberately strike civilian targets, or targets where civilians live and which are of no great military significance, in revenge for Hamas’s crimes. That would be a clearly illegal order, which IDF personnel are forbidden to obey, and would go to prison for obeying.

These animals kill their own children while their parents applaud. No Falcon known to biology would do such a thing.

What do you expect from a people who use their children as human shields?

The more I learn about Palestinians the more I understand why no Arab nation will take them in.

In fact, IIRC, these “Palestinians” were originally Jordanians who got thrown out of their own country.

palestinians in Gaza are mainly of Egyptian origin. The West Bank (Jordanian) palestinians look down on them.

The ones on the so-called “west bank” aren’t from Jordan either. Their Jordanian citizenship comes from the brief period when Jordan occupied that area (which is when it got the name “west bank”, which has inexplicably stuck with it ever since). On the contrary, most of Jordan’s current population came from west of the river.

So…how long before Yahoo BSNews includes this story, like they did for the woman who shot an ancient giraffe who was culled for herd preservation. I won’t hold my breath…

Like using civilian objects and civilians as props of war, this is a crime against humanity, especially as it is widespread and done in a pattern.

“Protocol Additional to the Geneva Conventions of 12 August 1949, and relating to the Protection of Victims of International Armed Conflicts (Protocol I), 8 June 1977.
Protection of the natural environment

1. Care shall be taken in warfare to protect the natural environment against widespread, long-term and severe damage. This protection includes a prohibition of the use of methods or means of warfare which are intended or may be expected to cause such damage to the natural environment and thereby to prejudice the health or survival of the population.

2. Attacks against the natural environment by way of reprisals are prohibited.”

They[ve been tutored by the obama admin and the democrat media.

Why wouldn’t we expect new ‘lows?’

Terrorists, child abusers, and now animal abusers – the good leftists they are.