Border Crisis: Over 200,000 Migrant Encounters in August With More on the Way

Border Crisis: Over 200,000 Migrant Encounters in August With More on the Way

“There were 18,847 encounters of unaccompanied children in August, down slightly from July, and 86.487 encounters of family units, marking a 4% increase over July.” 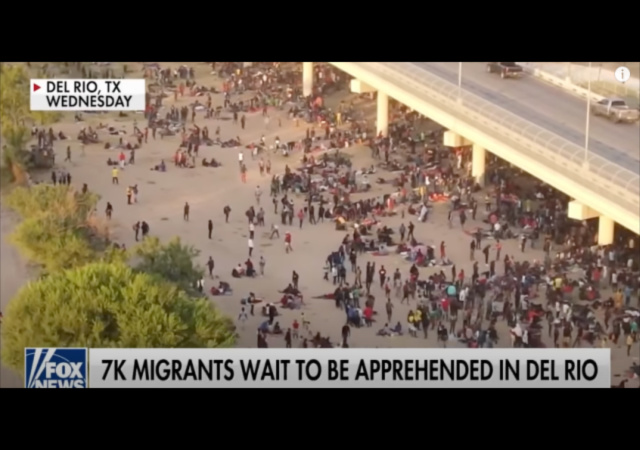 The Customs and Border Protection (CBP) reported they had over 200,000 migrant encounters in August.

That’s two months in a row the Border Patrol has seen over 200,000 migrants:

In August, 49% of apprehensions were single adults, down 7% from July, and 44% of migrants overall were expelled via Title 42 public health protections put in place under the Trump administration and extended by the Biden administration.

There were 18,847 encounters of unaccompanied children in August, down slightly from July, and 86.487 encounters of family units, marking a 4% increase over July. Just 19% of encounters involving family unit individuals resulted in a Title 42 expulsion.

Fox News has drone footage of over 4,200 migrants under the International Bridge in Del Rio, TX.

Law enforcement source on the ground at the bridge this morning just sent me this video showing the situation there. I’m told a large majority of the migrants are Haitians and more are crossing into the US and arriving at the bridge by the minute. BP w/ limited manpower @FoxNews pic.twitter.com/dHWCrhFikq

The Biden administration is obsessed with forcing vaccines on American citizens against their will.

The DHS inspector general found that the department “needs to enhance its Covid-19 prevention measures” at the border:

“Without stronger COVID-19 prevention measures in place, DHS is putting its workforce, support staff, communities, and migrants at greater risk of contracting the virus,” concluded the report, which comes amid the global pandemic.

The review, conducted between March and May, unearthed several issues with the agency’s Covid-19 management efforts at the southwest border.

The report noted that US Customs and Border Protection, which is overseen by DHS and is responsible for short-term migrant detention, is not able to maintain proper physical distancing in holding facilities because of the number of migrants illegally entering the United States and the inability of other government agencies to rapidly take custody of migrants. Extended time in custody leads to overcapacity and overcrowding at Border Patrol stations.

Additionally, the Covid-19 testing process for families that have left CBP custody is “not effective because municipalities cannot force families to isolate for the required quarantine period,” according to the report.

CBP is not required to and does not conduct Covid-19 testing for migrants who enter custody. Instead, the agency relies on local public health systems to test symptomatic individuals.

These a people are not migrants. They are invaders and should be treated as such. Our so called representatives do nothing to stop this. In fact they do the opposite. What country has survived without boarders?

People who don’t remember history are doomed to repeat it.

As democrat vote counters always say, “The more the merrier.”

Have a pulse? Oh…guess not. Oh well, no problem!

If Dems ever let illegals vote, Dems will have entire 3rd world country populations vote for them even if they didn’t vote or are no longer alive. Cheating 2.0

It’s a tsunami. Waves of illegals are surging across the border, pushing over the border fence and everything in their path, leaving behind debris of water bottles, empty cans, cigarette butts and piles of human feces.

Tt’s time to call them what they are. 160 million of these parasites, including their U.S. born children, have swarmed this nation, They bring with them the behaviors that wrecked their home countries. They seek a paternalistic government that will take care of them. Like a swarm of locusts, they just consume everything in sight, creating the chaos that we all see, without adding an ounce of value to this country.

I would point out the errors in what you wrote. Unfortunately there none. God help us, every word is true!

“…without adding an ounce of value to this country.”

Well, I wouldn’t say that. There was an illegal immigrant that added two ounces of value about ten or 15 years ago. I think I read about it in the Guiness Book of World Records.

Chaos refers to a hidden order by virtue of an unwieldy problem set and incomplete or insufficient characterization. President Trump disproved this hypothesis. One of many tasks on the docket (e.g. progressive medical and pharmaceutical prices and affordability), in process (e.g. conditional handover of Afghanistan to the established government), and completed (e.g. ending Obama’s transnational wars) .

Good point about chaos. In mathematical dynamics systems the states’ random matrix entries can appear random, but the overall matrix can have group/Lie-algebraic structure. Wigner developed Random Matrix Theory to overcome the too complicated structure of many-bodied problems, such as the energy levels of heavy nuclei. The RMT can describe a statistical Hamiltonian energy function that is constructed from the statistical mechanics of a network, replacing a classical Hamiltonian that can’t fit many-bodied problems.