“House Speaker Nancy Pelosi has said she will not put the bipartisan infrastructure bill on the House floor until the Senate moves on the broader $3.5 trillion package” 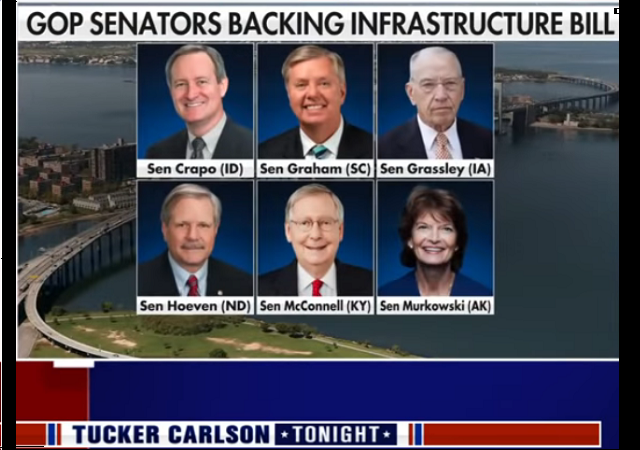 A jaw-dropping 17 Republican senators are supporting the horrific, pork-stuffed “infrastructure” bill that will be voted on this weekend.

Tucker Carlson did a segment on this Friday night.

At least 10 Republicans were needed to advance the bill. In the end, Democrats were able to net 17 GOP votes:

The next step is to send it to the House, where Nancy Pelosi has pledged to hold it hostage to the even more outrageous $3.5 trillion socialist bill.

Majority Leader Chuck Schumer said shortly before adjournment that, “We very much want to finish this important bill,” and so he was scheduling the Saturday session.

Republican Senate leaders, meanwhile, have cautioned Schumer against acting too quickly to allow all members the opportunity to propose changes to the bill.

“We need to take the time to get this legislation right, and that means giving senators who are not part of the working group adequate time to offer amendments and hopefully improve this product,” South Dakota Senator John Thune, the Senate’s No. 2 Republican, said Thursday.

. . . . After the Senate clears the bill and sends it to the House, senators will vote to approve a budget resolution that provides the blueprint for the $3.5 trillion package. That legislation incorporates Mr. Biden’s policies on child care, health care and the environment, which were left out of the more narrow bipartisan infrastructure bill.

Approval of the budget resolution jumpstarts the fast-track process Democrats in Congress are using to pass the larger plan. Known as budget reconciliation, the procedure allows legislation to clear the Senate with 51 votes, and without Republican support.

Both pieces of legislation are moving through Congress as part of a dual-track strategy, though it could be weeks before either make it to Mr. Biden’s desk. House Speaker Nancy Pelosi has said she will not put the bipartisan infrastructure bill on the House floor until the Senate moves on the broader $3.5 trillion package.

There are the old RINO reliables, McConnell and Graham.

Rob Portman, I should have guessed that!

Not to mention Romney and Crapo and Collins and…

All the usual suspects who we need to get rid of, plus a few. And they will enable the 3.5 Trillion additional spending. Who needs to support generic Republicans when these 17 are Socialist/Communists lite? No party donations, no GOP PAC donations. I guess I should be happy none are my Senators, for I’d have a hard time voting for any of them after they vote for igniting likely hyper-inflation which will ruin our families.

Only reason not more because wouldn’t look good at home

These scoundrels not only support that POS bill, they are leading the charge to get it passed! Idaho, North Dakota… So much for “red states”. Everyone is for sale. You can count the number of trustworthy Republican senators on one hand with maybe four fingers left over. Maybe.

Apologies for the senators from North Carolina. The earthquake is Jesse Helms turning over in his grave.

All the usual suspects of RINO shit.

But hey guys. We TOTALLY have to put Bitch McConnell back in as Senate ‘leader’ so he can put a stop to crap like this!

And let’s get McCarthy in as Squeaker, to carry on Boehner’s legacy.

The incrementalism continues. Notice how it never ever goes in the other direction. Thelma and Louise will go over the cliff. We are just arguing about the speed we get there. Sold out for the umpteenth time.

During Trump’s presidency, he wanted to pass an infrastructure bill and was willing to work with Democrats to do so. Did they reach out to him in a spirit of bipartisanship? Absolutely not.

The Government is out of their minds.

R Senators are being bribed with PORK $$$. PORK is like heroin for senators – they are addicted.

Only about 10% of these 2 bills will actually be spent on REAL infrastructure.
> The rest is spent on Progressive restructuring of America.

They will mortgage our grand children’s future and reshape America into a Progressive nightmare.

When they write books about the destruction of America – this $4.6 Trillion Boondoggle will get a full chapter.

“When they write books about the destruction of America….”

Most damning: they will look at US, and wonder how we went along with it all, right into our graves. Just like we wonder in amazement at the ‘good’ Germans of the 1930s.

Well the good news is that Roy Blunt, Rob Portman, and Richard Burr are NOT running for reelection so, there are 14 others to purge. Lisa Murkowski is up in 2022, but the rest of the backstabbers are locked in for years unless Divine Intervention helps out.

One thing for certain: MITCH MCCOMMUNIST HAS TO GO NO MATTER WHAT. He’s been a failure for Republican Conservatives and those with Conservative Values; he’s responsible for losing control of the Senate with his Bone Headed decision to NOT match the two who ran for Georgia Senate Seats promise of Stimulus Money; and he’s responsible for having pi$$ed away all the power that he and Lyin Paul Ryan with Kevin McCarthy whined to finally get on Jan. 20, 2017 TO DO NOTHING TO SUPPORT PRESIDENT TRUMP OR AMERICAN PATRIOTS.

No real suprises here. Especially one of my Senators, Portman, RINO-Ohio.

Why would they care? It’s not their money.

Begging to get some money to your state in return for letting them call it bipartisan is what happens when you have no power to stop the bill.

Reconciliation…..We have the filibuster for some things but for this we most definitely do not have it, and the question for these senators is “I can’t stop the bill but I can bring home the bacon if I let it be called bipartisan”.

If we had the power to stop these bills by say having one or two senators we would be in the same situation we had in 2014-2017 when those exact same senators did stop every single Obama bill.

This is the consequences of the Jan 5th election nothing more.

Letting it demoralize you will keep you from voting in 2022 or fighting for 2022 which is the only way these defeats stop.

Remember how Republicans in congress helped Obama pass things after 2010? Neither do I that is the consequence of them having the power to stop things.