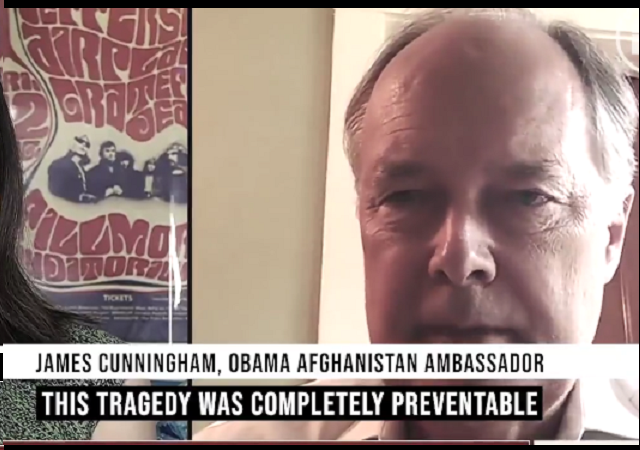 As part of my job here at LI, I watch a lot of videos. A lot of videos. Generally, when it comes to partisan ads, I just keep seeing the same lame thing over and over, be it from the left or the right. The cacophony of [insert party/wing] screeching hysterically and/or darkly intoning about how dangerous and threatening the other side is just sort of blends together and fades into the background after a while.

It sort of feels like that “nose-blind” commercial: a particular ad may stink to high heaven, but when all you see is stinky, nasty ads, you go “propaganda blind,” they are invisible to you, their stench is just part of the political scene and fades into nothingness. When everyone is ‘just like’ or (fake swoon, gasp!) ‘worse than’ Hitler or Stalin or Mao, no one is. This applies equally to both sides.

So I admit to being more than a little surprised when I watched the GOP’s recent ad featuring former Obama-Biden admin officials lambasting feckless and incompetent Joe Biden for the absolute, and “completely preventable,” horror show that has so far transpired—and that is far from over—in Afghanistan.

It’s jaw-dropping and a great ad.

Joe Biden is to blame for the botched Afghanistan withdrawal.

Stevie Wonder could have seen the collapse of Afghanistan’s army and government coming. Why couldn’t Biden and his idiot handlers? Their “plan” for withdrawal was beyond moronic. This administration is headed by a senile old fool, and staffed by cowards and imbeciles. They all need to go!

Not only that, but they lie constantly to the public. A few days ago, the State Dept said there were about 1500 Americans trapped in Afghanistan; today they’re saying it’s 350–we know they didn’t take 1200 out in the last few days. So how many people are still stuck there and how many are they going to abandon?

Concerning the pallet of US $100 bills, if you can’t load it on a plane how hard would it be to pour a little gasoline on it and light it? Why give it to our enemy? What’s the logic in that? Unless there’s some ulterior motive.
???????

One dark view – they knew Taliban would take over. Wanted to arm them in a way that would not cause objection by Repubs or by public.

Why? Obama and Biden seem to love backing third-party armed factions to do their dirty work. Look at ISIS which was indirectedly supported by Obama thru Saudis – to target Syria.

Begs the question – what country borders Afghanistan and is a common adversary of both US and Taliban ? Any guesses?

Well duh everyone knew the Taliban would take over by again it was a question of how quickly. That was the surprise.

The us has used proxies forever, why do you think it’s just Biden/Obama?

As for bordering countries Afghanistan is strategic in that its in-between a lot if big powers. China to the east, Russia to the north, ( well it used too but has some old Soviet block countries I between now) , India/Pakistan to the south. I’m not really clear what your point is given the inevitable failure of the afghan gov when the US withdrew. If you are suggesting it was for the benefit of china then yeah maybe but that claim would equally apply to Trump

The entire National Security / Intel. Agencies must be cleaned out. These idiots don’t know a NaSec threat if it kicked then in the arse.

In Vietnam we fought for “hearts and minds” of the people. Today we allow opponents to infect the hearts and minds of our own people with divisive dribble that is designed to undermine our society.

Fire 3/4s of the NatSec and Intel. Agency staff / researchers- they are worthless.

Afghanistan was going to have a cost either way. You either accept a long term commitment to Afghanistan or you don’t and all the consequences that follow form those options.
You clearly have no idea what a Marxist is, there are very few US Marxists and none in positions of authority at all. If you are referring to AOC and Bernie they a social Democrats not Marxists.

They knew it would happen. It is likely an integral part of their plan.

Seems we have drone assets bombing near Kabul Airport. Why can’t we take out some of the aircraft we left? We left them, we blow them up. 200 easy targets.

Because doing so means the Taliban are denied the planes. They need them to start trioubke so the next Neocon President can send more of our healthiest and smartest to be chopped to pieces.

By their hiding and silence they SPEAK WITH LOUD VOICE IN SUPPORT OF THEIR COMMANDER, BECAUSE HE SURE AS HELL IS NOT THE PEOPLE’S PRESIDENT! AND THEY ARE NOT THE REPRESENTATIVES/SENATORS OF AND FOR THE AMERICAN PEOPLE!

The WaPo is reporting that the Biden admin negotiated exactly this debacle. They let the Taliban take control of Kabul, and therefore the American hostages we’re leaving behind. And our Afghan allies thrown into the pot gratis.

This wasn’t a mistake. Biden and his crew deliberately betrayed America. As they are doing on our southern border.

Remember folks; the left (mainstream Democrats) hate you and want to see you as dead as those 11 Marines, Navy Devil Doc, and Army SF Soldier killed by ISIS-k

I have no love for Xi-den, but, I observe that the vile Obama lackeys are in no position to criticize Xi-den, at all, considering their narcissist-incompetent former boss presided over a foreign policy that was even more incompetent, feckless, naive and foolish than Xi-den’s. I’m talking about dismissing the rise of ISIS with an idiotic and flippant pro basketball analogy; lecturing the U.N. that “the future must not belong to those who slander the prophet of Islam;” granting Iran’s despots generous concessions, without meaningful or enforceable concessions extracted, in return; serenading Raoul Castro at a baseball game, like a star-struck, neo-communist fangirl; deposing secular strongmen Mubarak and Qaddafi, who were keeping a lid on Islamic terrorism, thus creating a power vacuum for ISIS to exploit, with savage and cruel repercussions for thousands of innocents; etc.

The Obama lackey-idiots should keep their mouths shut.

What is becoming more and more obvious is that Biden had decided to abandon the Afghan government, pure and simple. We’ve seen stories from Afghan military that Biden had taken away the support system for their outposts. Taken away their servicing of aircraft. Why would they fight when they knew they were negotiated out ? Now, we have a story that Biden had the option to protect Kabul but opted to let the Taliban do it.

I mean sure, Biden is a jackass, but come the fuck on. 20 years and they still need us to service aircraft for them?

The Afghan army is a JOKE. The US pays their soldiers because their corrupt leadership is incapable of doing it. The US services their aircraft because when they have training, the corrupt pieces of shit put their idiot incompetent family members and political cronies in the course because it’s prestigious to be an ‘aircraft mechanic’, never mind the fact that they CAN’T DO THE DAMN JOB.

The US should have cut and run 15 years ago. Their corrupt government was NEVER going to have a functional army without us.

Obviously this catastrophic disaster of a ‘withdrawal’ puts Americans in jeopardy, but the Afghan government and army was NEVER going to be capable of operating without US support and money.

No, they didn’t need us to maintain their aircraft. But they did need outside contractors. He’ll, we need contractors.

Biden barred THEIR contractors from HKIA. Biden effectively grounded the Afghan AF. He didn’t allow the Afghan government’s own contractors into their own country.

Now I agree we shouldn’t try to turn a country largely populated by illiterate goat herders into a mini me of the U.S. armed forces. But that’s what we did for the last 20 years. And after spending all that time training them to fight our way Biden pulled the rug out from under them.

You know what a Blue Falcon is? Biden is the poster boy.

I find it strange that the only person with any honor was the Marine Lt. Colonel who was willing to speak out. Why hasn’t there been any demands for all the Joint Chiefs to ” fall on their swords??” Blinken and Sullivan should be replaced. ASAP

He’s also the only officer to get fired in this whole mess. Let that sink in.

So the obvious solution is to remove Biden and replace him with Kamala Harris. Wasn’t that the plan from the beginning? So he will soon resign or “die”.

This wasn’t incompetence, this was on purpose.
The RNC can just STFU, because the Republican Party is as responsible for this as the Dems are.

Agree! Agree! Agree! they are a criminal syndicate of Professional Political Pimps, elected for the millions of dollars they will siphon into their banks for more homes, and ice cream refrigerators WHAT THE HELL IS GOING ON WITH THE VOTERS OF AMERICA?? OH, adult comprehension level in U.S. is 5th grade, we got 10-11 year olds experience leading our country!!

I hate my Android. I am NOT responding to other comments. But my “smart” phone randomly assigns my comments to others. I miss my laptop