The defendants identified by the DA are: Daniel Shaukat, 20, of Bensonhurst, Haider Anjam, 21, of Midwood, and Ashan Azad 19, of Midwood 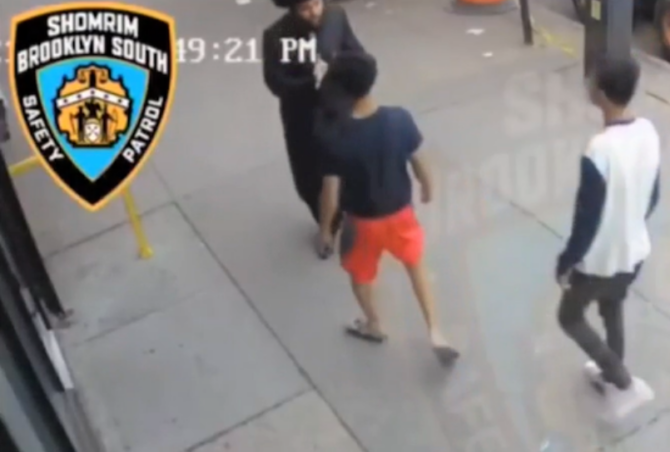 Back in May, I blogged about the shocking attacks in broad daylight on Jews on the streets of New York City.

One particular case stood out because the unhinged antisemites demanded that two teenage boys shout “Free Palestine,” and when they refused, they were beaten and one was held in a choke hold until they could escape their assailants.

We aware of this incident and are investigating. https://t.co/jpcJGsmeqr pic.twitter.com/6AapoWXNlA

These alleged assailants have been arrested and charged with a broad range of crimes, including third-degree assault as a hate crime, second-degree menacing as a hate crime, and criminal obstruction of breathing.

Three Brooklyn men have been charged in a 68-count indictment in connection with two incidents in May in which they allegedly targeted religious Jews.

The defendants allegedly said, “Kill all the Jews,” demanded that a Jewish man say, “Free Palestine,” punched him when he refused, and then chased him and a friend while holding a cricket bat.

District Attorney Eric Gonzalez identified the defendants as Daniel Shaukat, 20, of Bensonhurst, Haider Anjam, 21, of Midwood, and Ashan Azad 19, also of Midwood. They were variously charged with third-degree assault as a hate crime, second-degree menacing as a hate crime, third-degree assault, criminal mischief, criminal obstruction of breathing and related charges.

District Attorney Gonzalez said, “All members of Brooklyn’s diverse communities should feel free to go about their day and observe their religion without fear of being targeted. Attacks such as those described in this indictment – including violence and threats of violence that stem from bias and bigotry – are abhorrent and will be prosecuted.”

We will be following this story and provide updates as they become available.

When are we going to take out the trash?

That is most certainly my opinion. There sure is a lot of trash which needs to be dealt with.

Now, watch prosecutors plead this down to jaywalking.

When we put Trump back in office.

What did he do about the trash problem when hw was in office?

We have nothing to complain about. The man did all he could do, that was forseeable. No one knew the depth of the corruption in our federal government (it’s complete). No one, except the rats that were part of it.

But for the treason Jeff Sessions and William Barr, our nation would not be in the crisis it is today.

No one on our side foresaw it.

No … Trump sold conservatives down the river … aided by other conservative’s both in media, the population and leadership. For a guy that boasted he could play the game and was a deal maker he was a shit leader that did little more than work to inflate his own ego and expand his dictatorial nature. Anything he did that coincided with a conservative issue or ideology he did for no other reason than that. He was a selfish bastard. To say nothing that the guy was a fool of a liar. Thanks to him Republicans and conservatism is the laughing stock of the world and he’s left us with a media and half the populace that laughs us off and effectively has sequestered us to the back of the bus. We’ve been politically castrated by that prick and it’s gonna take ages to gain back ground that Trump so quickly lost. He could have been better with little effort and a little smarts … but as it turned out the guy was a putz.

In Berlin 🇩🇪 some are starting to organise to get the message out https://esw.pub/ueber-esw/

Living as a Jew should not be a provocation. 🕎

below is the text from their About:
HONOURLESS BUT NOT HELPLESS

Alliance Against Unacceptable Conditions in Neukölln
Assaults on gays, lesbians, and transsexuals, ranging from insult to attempted murder, are gravely increasing in Berlin. And so is violence against people revealing themselves as Jews or Israelis. According to police statistics, antisemitic violence has risen by 18 percent in 2016–17, trans- and homophobic violence even by 25 percent since 2015; the estimated number of unreported cases is supposed to be much greater. Also, Romani people, homeless persons, and women are exposed to similar attempts at intimidation and assaults.

In northern Neukölln, this kind of violence is so obvious now that potential victims are hiding away in order to avoid conflict. Bars that explicitly welcome Jews, lesbians, gays, or transsexuals are in danger of being attacked, or at least in jeopardy of losing their intimidated customers.

In a Kiez priding itself as inclusive, diverse, and tolerant, people prefer to remain silent about all this. We don’t.

We want to stop the violence, that is, to begin with, help those subjected to it and organize resistance to those who wield it. It is not our concern to call single perpetrators to account; that is the responsibility of the police. Perpetrators tend to appear on the scene in larger groups anyway, in which they are only able to gather the needed courage to easily humiliate a single person or a couple. Instead, it is our responsibility to disallow the circumstances to continue, in which such violence is tolerated and victims are silenced.

If we want to do something about it, however, we first have to take a closer look at it. While those imperilled fearfully deny themselves in public, the political public discourse understandingly denies the causes and motifs of that violence. Rather than clearly calling it out and risking being accused of “islamophobia” or racism, the chauvinistic behaviour of young men is being tolerated—which on the part of the young men is taken for signs of weakness. In contrast to their usual attitude towards German neo-Nazis, whose “worries and fears” they rightly leave to the political right, leftists and liberals in this case go out of their way to consider the social environment. This focusses especially on the so-called migration background of the offenders, which involuntarily but simultaneously disqualifies their actions in a racist manner.

At best, leftists and liberals acknowledge the fact that all identified perpetrators do not come from distant lands, but from a fairly typical Neukölln milieu governed by a “culture of honour and shame,” if only reassuringly. “Yes, but…”

But what can we do? First and foremost, we have to openly state that this particular kind of violence does exist and that it must not be tolerated on any terms. Moreover, we state that no perpetrator should be able to count on being pardoned as if he was an irresponsible person due to his “descent,” “religion,” or “culture.” Whoever is fighting racism, ought to take seriously those on whose behalf he or she believes to speak, and not to treat them as descendants of an alien world, which would both incapacitate them and at the same time reassure their actions. Nobody is to hold a life-long privilege on narrow-mindedness and silly conduct.

The question why the hatred of Jews, homosexuals, and women, as well as of all that might contradict the proper code of honour, is obviously much stronger within a milieu seeing itself as Arabic and Islamic than in others, e.g. Italian, Vietnamese, even German, doesn’t have to be fully answered in order to counterpose hatred and violence.

The danger of pleasing AfD voters can easily be avoided by making clear that the intention is to support also those, in particular, who were born into that milieu. Muslims, too, not only have the right to believe what they believe, but also the right to escape the culture imposed upon them. It is, sadly enough, characteristic of German politicians that they do not talk to these people but instead to their self-proclaimed representatives, that is, to mostly conservative Islamic organizations.

We want to enlighten a wider public about the conditions we are not willing to put up with any longer. Namely, conditions in which people are regarded not as self- determined individuals but as integral parts of a tribe. We want to dispute this in public, and for this reason we have formed a steadily growing network receptive to any kind of support.

It is our aim to draw attention to the most recent assaults in this borough which have all too quickly fallen into oblivion, to express our solidarity with those affected, and to set forth a platform for debate and future action.

We invite everyone to take part—so that people in Neukölln can really be different without fear.

“District Attorney Gonzalez said, “All members of Brooklyn’s diverse communities should feel free to go about their day and observe their religion without fear of being targeted.”

But only their religion.
Wear a MAGA hat, and you’re on your own.

The goose-stepping, Muslim supremacist/terrorist cadre of the vile Dhimmi-crat Party, ginned up by their ideology’s intrinsic supremacist, totalitarian and belligerent pathologies, and, egged-on by the Dhimmi-crats’ persistent and dishonest slanders against and vilification of, Israel.

Antifa. BLM. Muslim psychos. These are the Brownshirts of the Democrat party.

The FBI is turning out to be the SS.

The sentences at issue are a joke. Throw these idiots in jail for at least a decade. Give them something to think about.

They’re not the problem. Their handlers are.

While I grant that any American Leftist is likely to attack any Jews not actively contributing to the Democrat Party at that particular moment; it does seem that the names of the suspects are of Islamic derivation. In which case, I am amazed that they are charged in New York City, and kind of expect that the DA’s office will drop them later.

Naw. They were three Mormon missionaries. Strange names for Mormons, I agree, but this can’t come out of the religion of peace.

Why are we letting this trash in the country?

“We”? You mean the democrat party and the GOPe?

They’re being let into our country to do exactly what they’re doing.

McConnell and company are as complicit as Biden.

Glad they are being charged but surprised a bit, bet the person are surprised as well thinking it was a Leftist fair game act.

They should all be locked up like the animals they are?

Rather interesting that said common denominator was loudly proclaimed when it came to the cab driver (assuming that it’s actually true, they don’t name the cab driver) yet conspicuously omitted regarding the perpetrators.

You get the same anger when you don’t say the pledge or stand for the national anthem.

Maybe such anger is not the sign of virtue it’s made out to be.

Anger, like lust, is a vice, not a crime. Acting on it is the crime.

Really?? Ignoring that ‘hate crime’ thing, I would have thought that a person who assaults someone and tries to obstruct their breathing would be looking at a lot longer than 4 years.