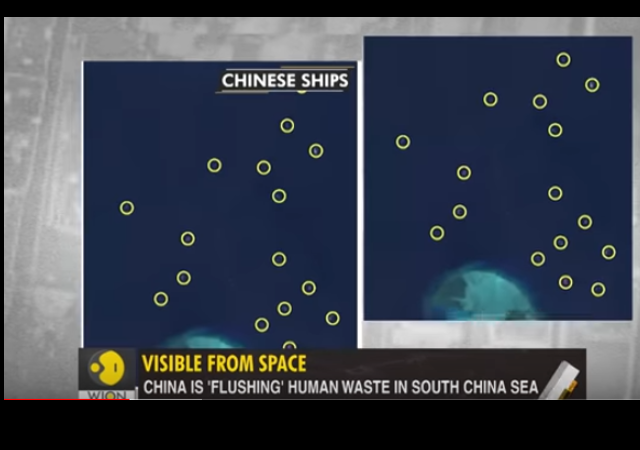 We have logged many posts about China’s carbon emissions and the rivers of plastic coming from Asia.

Additionally, we have also chronicled the Chinese fishing fleets plundering international waters close to the iconic Galapagos Islands as well as appearing within the Exclusive Economic Zone of Argentina.

But China has managed to take pollution and environmental damage to a spectacular new level. Reports from India’s WION indicate that swarms of Chinese vessels have dumped so much human waste and wastewater for years in the South China Sea we can see the mess from space.

Satellite images over the last five years show how human waste, sewage and wastewater have accumulated and caused algae in a cluster of reefs in the Spratlys region where hundreds of Chinese fishing ships have anchored in batches, said Liz Derr, who heads Simularity Inc, a software company creating artificial intelligence technologies for satellite imagery analysis.

At least 236 ships were spotted in the atoll, internationally known as Union Banks, on June 17 alone, she said at a Philippine online news forum on China’s actions in the South China Sea, which Beijing has claimed virtually in its entirety.

“When the ships don’t move, the poop piles up,” Derr said.

The Philippines’ defense minister has ordered the military to investigate.

China maintains a constant presence of coastguard and fishing boats in the South China Sea to assert its claim of sovereignty, including hundreds in the Spratly islands, where the Philippines, Brunei, Taiwan, Vietnam and Malaysia also have claims.

..”While we are confirming and verifying these wastes being dumped … we consider such irresponsible acts, if true, to be gravely detrimental to the marine ecology in the area,” Philippine Defense Secretary Delfin Lorenzana said in a statement.

“Despite conflicting claims and interests by states in the South China Sea, all nations must be responsible stewards of our natural resources and environment.”

Peter Koning, vice president of sales at Simularity, which performed the satellite work, said it is not normal for vessels to stay motionless for such long periods, and that they have been monitoring the ships for months. The sewage buildup has caused excessive damage to the local environment. It puts coral reefs and fish stocks at risk.

Excess sewage encourages the growth of phytoplankton in the water, which can cause oxygen shortages. Without adequate oxygen supply in the water, coral reefs habitats can die.

“These bacteria consume oxygen that would normally be available to the fish, creating a ‘dead zone,'” Simularity said in its report. Coral reefs take up to 10,000 years to form, and barrier reefs and atolls take between 100,000 and 30 million years to fully form.

…Simularity warned that it’s not just coral reefs that are at risk here, but fish stocks in the South China Sea — an important food source for the region.

I guess the Chinese think they will sail over to South America for fish when they need it.

The images were obtained from former Navy intelligence officer J. Michael Dahm of Johns Hopkins University Applied Physics Laboratory (APL), who told the newspaper, “The most significant change in military posture in 2021 is the appearance of Chinese special mission aircraft and helicopters at Subi and Mischief Reefs, indicating the PLA may have commenced routine air operations from those airfields.”

The PLA, an acronym for the Chinese People’s Liberation Army, reportedly occupied Mischief Reef in the Spratly Islands in May and June, and the Subi Reef in June and July.

Well they dumped a pandemic on the world so why not this too.

They’re just asserting ownership, like the dogs they are.

She would be perfect for the job becasue she stays on top of shit.

I keep saying that China is a shithole, they’re simply exporting the only thing they produce in bulk.

Where are all the Ecowarriors?

They’ll avoid this story like they have the WH censorship story.

Communists are heartlessly endangering the snail darter? Say it isn’t so, Mao!

A spotted owl was spotted somewhere.

China MUST be taken down, but this senile old angry man will take down America first

It doesn’t help much when US military craft are being chased out of the area. Doesn’t present much of a deterrent.

But they have agreed to reduce emissions in the future.

Not those types of emissions. They’re expecting another periodic famine.

Q: Who’s going to do what about it?

A: Nobody and nothing.

His Fraudulency will twist the arms of his new BFFs at the UN to get them to tell China to clean up their mess OR ELSE! They claim to own that area so CLEAN IT UP!

That’ll work. If they don’t, His Fraudulency will take them outside and challenge them to a pushups duel to the death. Or something.

Where are all the evirowhacos? This might be a place you want to protest.