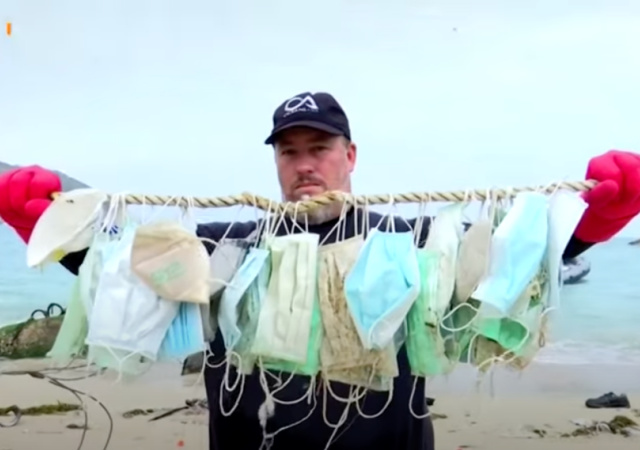 During the pandemic era, part of my daily routine has been to take a long hike in a nearby regional park. During my walks, I see two or three discarded masks on my route.

Shoshanah Jacobs, a biology professor at Ontario, Canada’s University of Guelph, also had the same observation when she looked around her neighborhood. In fact, she gathered a group to do a detailed study of masks’ local environmental impact.

In their analysis, the team found that masks and gloves were discarded near the places where they were required to be worn . . . as if people couldn’t wait to be rid of them.

The students in charge of collecting the data focused on two residential neighbourhoods, two grocery store parking lots, a hospital district and a walking trail. They would take daily evening walks for five weeks from late May through June and recorded their finds on a Marine Debris Tracker app to mark locations, dates, times, and types of litter.

In the five weeks, they found 1,300 pieces of discarded PPE over an area equivalent to about 50 football fields, something Ammendolia, a U of G zoology grad, deemed “extremely alarming.”

They found the most PPE litter in areas where people tend to go in and out of such as grocery stores, parking lots, areas around hospitals, residential streets and trails.

Waste companies in the United Kingdom are also noting the problem.

The huge number of face masks being put into the bin or dropped on the street is raising concerns about the amount which might be leaking into rivers and the sea, said Charlotte Green, from waste company TradeWaste.co.uk.

“If you walk around any street now you will see disposable face masks being blown around with leaves in the gutter – they are the new cigarette butt – people are chucking them after use,” she said.

“We know that 53m are being sent to landfill each day – but just how many end up elsewhere is the very scary part.”

She said masks were being found in streams, rivers, and oceans – similar to single-use plastic bottles.

Environmentalists in France and Hong Kong have also investigated the issue.

In France alone, authorities have ordered two billion disposable masks, said Laurent Lombard of Opération Mer Propre. “Knowing that … soon we’ll run the risk of having more masks than jellyfish in the Mediterranean,” he wrote on social media alongside video of a dive showing algae-entangled masks and soiled gloves in the sea near Antibes.

…Earlier this year the Hong Kong-based OceansAsia began voicing similar concerns, after a survey of marine debris in the city’s uninhabited Soko Islands turned up dozens of disposable masks.

“On a beach about 100 metres long, we found about 70,” said Gary Stokes of OceansAsia. One week later, another 30 masks had washed up. “And that’s on an uninhabited island in the middle of nowhere.”

Yet, it is activists just like this who are pressing for continued mask mandates. And now, with the promotion of “double masking,” there could be even more “mask pollution.”

For consistency, if masks are pollutants, then all mask mandates should end. Maybe then I won’t have to hike with a disposal bag and a pair of gloves.

No proven health benefit but definite proven pollution all on behalf of a political narrative.

100 days of mask wearing has turned into 365 days of double mask wearing, or a 730% increase in expected bio-hazard trash across America.

Loads of research has been carried out now regarding mask wearing. Hell even the double mask thing has some anecdotal evidence of it’s increased efficy. (Yes I was cynical too)

You might want to try READING the articles you Google up, Mark. There’s very little in them about the fabric and cloth masks people are wearing. For example, from your 2nd article:

The studies that had been done up until the beginning of the pandemic dealt with SURGICAL masks. Are people wearing surgical masks?

“Two key findings are that (i) the surgical masks, unvented KN95 respirators, and, likely, vented N95 respirators all substantially reduce the number of emitted particles, but that (ii) particle emission from homemade cloth masks—likely from shed fiber fragments—can substantially exceed emission when no mask is worn, a result that confounds assessment of their efficacy at blocking expiratory particle emission.”

There’s very little real science behind mask wearing, and what there is relates to a kind of mask that ALMOST NO ONE IS WEARING.

Google is not a substitute for knowing things, Mark. And looking up articles and posting them isn’t an argument.

Masks reduce anxiety. That’s about it. They are far more effective at causing mental illness in the wearer and chronic future ptsd in millions of kids who are living the 21st century version of duck ‘n cover.

The lefties shouldn’t be seeing discarded masks as trash or litter. Have they no heart?

Don’t the dogs, bears, and raccoons need them as much as we do?

Not this bear. Not unless compelled.

Raccoons have their own masks

Question is- this is the deadliest pandemic in history! Why aren’t there biohazard waste bins at the entrance of every store to discard the tissues we dry our hands with and the masks we’re getting rid of?

This isn’t even close to the deadliest pandemic in history.

no… but the news makes it sound so…

Uh oh, masks made of plastics. Probably from fossil fuels. That would mean no more masks under quid pro quo slo joe’s energy mandate.
Karen’s of the world need to unite to fight the energy mandate before all their children die.
Do it for the children.
Haven’t washed my mask since about May of last year. Made out of weed barrier material and worn under my nose.

I live in a rural county dominated 60-40 by the Rs, but the nearest town is heavily D and “progressive.”

In late ’19, that town’s city clowncil decided to ban “single use plastic bags” (which are not “single use,” but why not lie?P) at the local grocery store. This matters, because the alternatives are pretty far away.

One stated reason was that plastic bags “clog the landfills.” So they switched to paper, and required a fee per bag. Fine, you idiots, I said, I’ll order a thousand of the bags you just banned and get around your idiocy.

Along comes the virus, and the same clowncil banned carry-in bags and suspended the bag fee. So our groceries have been bagged in “free” paper sacks that cost the store 8 times as much per bag as the plastic ones did.

For the past year or so, I’ve been throwing away paper bags like crazy, into the plastic (!!) bags that the county uses for recycling. Kill me for not giving (or inventing) precise measurements, but you’ll just have to trust me when I say that a paper grocery sack is a good 10x heavier and bulkier than a plastic sack that will hold the same amount. And more prone to breaking.

As soon as they start charging for paper sacks, out come my plastic ones. Each of which get reused around here, mainly as wastebasket liners but also for other purposes. Paper sacks? One and done, kids.

Random, I meant to hit reply and accidentally down voted your post! I apologize.

Those plastic bags from the grocery store get reused in our house every day when I scoop the clumps from the kitty litter into them. We have three cats. I’d hate to have to buy plastic bags for cat poop disposal.

Washington perpetuates the crisis to perpetuate its power.

How did we allow so much incompetence and corruption to take hold and flourish in our country? “LISTEN TO THE EXPERTS!!!” “BELIEVE THE SCIENCE!!!” “You can’t fight city hall.” A lot of people were flat out bullied into it. Add decades of grooming by slick TV actors telling us all kinds of lies such as “The Vietnam war is no longer winnable.” The dumbing down of our educational system. The bigotry of low expectations. The media and celebrities touting and endorsing flat out stupid people as brilliant minds full of great ideas regarding politics and governance. They elevated foriegn policy “geniuses” who couldn’t negotiate a peace deal between rosie o’donnell and a box of donuts if they absolutely had to. A lot of people fell asleep at the switch. Let other people do their thinking for them. Anyone have any doubt that somewhere early on, fauci, knowing he didn’t actually know jack sh!+ about what he was doing, simply chose the dazzle ’em with bullschit approach? Oh well, at least he’s going to make piles of cash for his vudu chicken bone reading mmethodologies. They always seem to make piles of cash no matter what.

And people say all Jews are smart? —

US threatens to ban Israeli planes landing in America:
https://www.jpost.com/international/us-threatens-to-ban-israeli-planes-landing-in-america-658867

Are you kidding? If Hitler were non-white, American Jews would be fighting for first place in line for the camps.

As my grandmother used to say, a shonde for the goyim.

I don’t understand what you just said … Giving a prize to Fauci is suicidal behaviour?

I think what he means is that they sometimes seem to act against their own best interests.

The honor being bestowed on Fauxi comes from a private, progressive organization, not the State of Israel.

“as if people couldn’t wait to be rid of them.”

That wasn’t a conclusion of the study, and is implied by using a link to the article within that statement. It’s not really surprising that disposable masks are taken of after visiting a shop that’s entirely logical. Just a shame people are too lazy to take the mask to a bin.

The same Karens that are being mask Nazi’s drop theirs on the ground as they leave stores.

If this Pandemic is SO threatening to us, WHERE are the biohazard disposal bins for these and the gloves??? They are lying to us.

I’ve been walking all over my neighborhoods and the surrounding ones for years. I almost never see plastic bags, even after a wind storm. But ’tis a rare walk that I don’t see a couple discarded masks.

The enviro-activists like to show those huge floating waste piles of plastics – but they don’t tell you that those photos are from Asian harbors after a heavy storm or typhoon, and all their street waste gets washed into the harbors. Once again, Asia gets a pass from the enviros.

Asia gets a pass from the enviros because Asia doesn’t give a happy crap what the enviros wail about.

Where are the obligatory pictures of birds and turtles and cute fuzzy woodland creatures with those elastic earstraps wrapped around their necks?

That is because a woodland creature choking on a mask would make that a second use of the mask. The recent snow brought a coyote into the neighborhood last night. I expect to see a bunch of “missing cat” and “please check your garage” posters on the poles soon.

A morbidly obese woman on the other side of the coffee shop is wearing a mask. I’m thinking that compromised ventilation and excess insulation are likely a bigger risk for her than Dr. Bob cooties.

If covid-1984 is as dangerous as they’re trying to tell us, shouldn’t those things be disposed of as bio-waste?