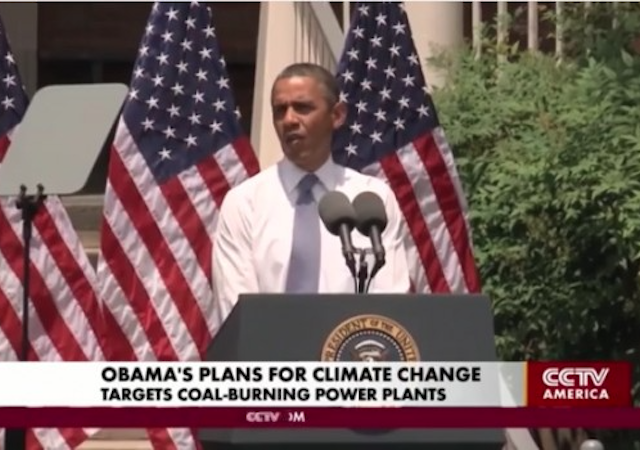 President Obama may have abandoned trusted allies and diminished US influence across the globe, leaving behind an inviting vacuum for tyrants and terrorists alike, but he is picking the right fights, and winning them too—at least the ones progressive liberals care about.

That’s what Former New York Mayor Michael Bloomberg wants us to believe. Michael Bloomberg, who now carries the pompous title of United Nation’s Special Envoy for ‘Climate Change’ wrote a triumphant editorial for CNN titled “We’re winning the war against coal.” He praised President Obama’s glorious record in the ‘War on Coal’, in which he forced 130 coal power plants out of business in the last 5 years and made it so an additional 70 plants will have to follow suit. According to Michael Bloomberg, the U.S. is well on its way to “phasing-out coal” as a source of energy. Former New York Mayor writes:

Here’s some good news that many Americans may not realize: Domestically, we are winning the fight against the carbon pollution that drives climate change. And by doing so, we are giving President Obama a strong hand to play when world leaders gather at the U.N.’s climate summit in Paris in five weeks to negotiate a global agreement to limit carbon emissions.

To understand how the White House finds itself in this position of strength, think back to 2010, when Congress failed to pass a cap-and-trade bill. That seemed to end any hopes of making major reductions in emissions and demonstrating American resolve to the global community. But in fact, even though the bill did not become law, the United States has already exceeded the carbon reduction goals it aimed to reach.

But guess what? The Chinese didn’t get the memo.

Beijing just announced that it intends to burn 17 percent more coal each year than it previously agreed to. This spike alone is higher than German industry’s entire annual fossil fuels consumption.

China won’t be able to keep its assurances of reducing carbon emissions from coal and fossil fuel it made to President Obama; and there’s nothing he or “United Nation’s Special Envoy” Bloomberg can do about it.

So, whatever President Obama managed to save in terms of carbon emissions — at great cost to American workers, tax payers and national industrial output, China will be more than making up for it on the other side of the planet. The New York Times reports:

China, the world’s leading emitter of greenhouse gases from coal, has been burning up to 17 percent more coal a year than the government previously disclosed, according to newly released data. The finding could complicate the already difficult efforts to limit global warming.

Even for a country of China’s size, the scale of the correction is immense. The sharp upward revision in official figures means that China has released much more carbon dioxide — almost a billion more tons a year according to initial calculations — than previously estimated.

Now should President Obama remind the Chinese, as he does at every possible occasion back home, that Climate Change is a ‘settled science’? As far as Chinese leadership is concerned, Climate Change is just as much a ‘settled science’ to them as the gold old Marxism handed down by Chairman Mao; they just got rid of one and won’t be falling for another one anytime soon.

While the Chinese might have traded their outdated ideology for free market pragmatism, the U.S. under President Obama is running down its economy by chasing illusionary “climate goals” dictated by an ideology based on questionable data.

President Obama remains conspicuously silent on atrocities committed by radical Islam, but you just can’t get him to stop about the dangers posed by the Climate Change. He might have absconded from actual battlefields, but as a climate warrior he relentlessly charges on in pursuit of ‘Quixotic Windmills.’

obama’s war is against America: his attacks on various American institutions and industries are tactical maneuvers.

Of COURSE, they won’t!

Neither will India. Why the hell should they?

And the vast majority of the electricity generated now by the plants that replaced those ‘dirty coal’ plants are produced by natural gas turbines, which put out more CO2 (as I recall) per kWh generated, and which depend on fracking in order to produce a reliable amount of gas. Hm. Seems I remember something about this ‘fracking’ concept, perhaps the administration’s EPA attempting to shut it down.

It would not shock me one bit to see the outgoing administration ram EPA regs out that would destroy fracking, cripple all coal plants, and shut down the nukes. That way when electricity rates shoot through the roof and the rolling blackouts happen, they can blame the Republicans in office.

No, gas is LESS productive of CO2, plus it produces virtually no ash.

Not that it matters. Obama in a typical year burns enough fossil fuel to make up for a good-sized coal power plant. Betcha.

Whoops, you’re 100% correct. Lbs-CO2 per kwh of 2.0 or so to 1.21 for natural gas, not counting any storage or transportation losses (Ex. a local coal/electric plant here has several months worth in a big pile, where a natural gas plant may not store any, due to the expense)

Still, the cost per kwh of coal is still roughly half that of natural gas, only approaching parity if the coal plant is required to use expensive CO2 capture and the natual gas plant is not.

I seem to have this memory of a commercial back in the 60’s by Chysler about Turbo vehicle that released not SO2, or CO but harmless carbon dioxide.

And the trees and plants would inhale deeply and flourish.

This climate change thing, is the biggest PONZI SCHEME, that any leader has ever pulled on America. Oblamo, is trying to destroy every institution in America. He is destroying our Country. China has bought up most coal reserves in the world. It is the most economical source of fuel.Oblamo is trying to help setup the ” One World Order.” He thinks that he will be in charge of ” Most,” of the World. There are about a dozen leaders plus World Bankers who think THEY, will be in charge of the World. The end result, should be interesting. I see WAR looming in the background.

Oh please. Your being too parochial.

The Chinese are also moving away from planned/one-child policy and helping to defend victimized people (with Russia and Iran) at home.

Meanwhile, Obama continues to lead in pro-choice/select-child, planned/cannibalism, and leaving people and a wasteland behind.

AGW is, of course, simply a mechanism for global wealth redistribution, the mother of all ‘rob Peter to pay Paul’ schemes. If you perceive your nation to be a robbed Peter rather than a gifted Paul, of course you oppose it,and China has.

That has been an openly stated goal, but it seems to me just another tactic of Marxist “Critical Theory”. Breaking down western society is necessary before the globalists can implement their goals of domination. America just happens to be the Saudi Arabia of coal, yet the left demonizes our mostly clean coal plant emissions because they emit “carbon”. “Electricity rates will necessarily skyrocket”, said Obama.

Free (thinking) people reject Marxism, but many of those will be duped with corrupted environmentalism, or “make love not war”, or the “PC diversity” and its “all societies/cultures are morally equivalent” nonsense.

So we get diversity and perverted environmentalism praised more highly than our successful cultural norms. Yes, wealth (and power)redistribution globally, but through the hands of the power brokers, the globalists that function like the Clinton Foundation functions … with only 10% to the stated benevolence.

Liberty was well distributed already (constitutionally) to “we the people” in America, which served us well till schools went PC. So Marxists became “critical” of everything Western, and insisted we praise their new PC religion as equal, while they constantly attack our western foundations. Redistribution of wealth and power is away from working America toward centralization, robbing we the people of our freedoms.

They Rob Peter, but Paul is really George Soros, and the unions and nefarious racketeer influenced and corrupt organizations. Have any small nations actually been helped by the AGW scam, that allegedly helps them so much? Mostly it deprives them of cheap energy, so they are harmed the most.

Only the propaganda promotes fair redistribution to the world, hold hands, sing Kumbayah. It is part of a “conspiracy”, but one that is very well documented for any that study the failure of Marxism, and their seditious plans

And they were handwringing about the loss of Kentucky last night. NEXT STOP ON THE RED-STATE EXPRESS, WEST VIRGINIA.

So Obama only wants to lead when it harms America. On everything else he leads from (his) behind.

Obama is leading us away from our hard won freedoms, knee capping us at every opportunity. It is knee ‘cap and trade’ away our sovereign powers.

The Bipartisan Policy Center also concluded: “We do not believe that impeding the global trade of fossil fuels is an effective or efficient means of reducing global greenhouse gas emissions.” The reason for this conclusion is simple: If other countries don’t buy their coal from the United States, they will simply buy it from somewhere else.

So it is fine for other nations to benefit from our cheaper coal, helping their “comparative advantage”, but Obama will kneecap US, on principle. Just what is that principle? We should be asking more vociferously.

And yet Joe Manchin keeps kissing O’s butt at the expense of his state. Sickening.

India is not far behind China…

“A significant number of Indian NGOs funded by donors based in US, UK, Germany and Netherlands have been noticed to be using people-centric issues to create an environment, which lends itself to stalling development projects,” the Intelligence Bureau said.

You mean China is not shaking in it’s boots when obie stamps his feet?