Can someone explain to BLM what happened in Cuba in 1959? Fidel Castro overthrew President Fulgencio Batista and implemented a one-state policy: Communism. 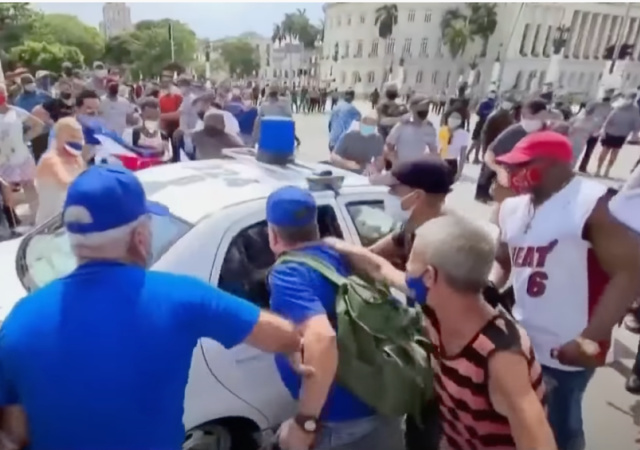 The communist regime in Cuba has been brutalizing the people since 1959. On Sunday, the people stormed the streets with American flags, demanding freedom and food.

Of course, Black Lives Matter condemned the U.S. instead of the communist regime for the protests and treatment they’ve endured for over 62 years.

Black Lives Matter has released a statement on Cuba: pic.twitter.com/NgnT1o1oZE

“Black Lives Matter condemns the U.S. federal government’s inhuman treatment of Cubans, and urges it to immediately lift the economic embargo,” they wrote. “This cruel and inhumane policy, instituted with the explicit intention of destabilizing the country and undermining Cubans’ right to choose their own government, is at the heart of Cuba’s current crisis.”

BLM continued: “Since 1962, the United States has forced pain and suffering on the people of Cuba by cutting off food, medicine and supplies, costing the tiny island nation an estimated $130 billion.”

There is no blockade of food and vaccines. A good percentage of Miami is sending giant amounts of food and medicine over there every day. What happens when it gets there… that's where your answer lies. https://t.co/c12hqmD28b

Can someone explain to BLM what happened in Cuba in 1959? Fidel Castro overthrew President Fulgencio Batista and implemented a one-state policy.

The communist regime has denied Cubans their basic human rights since 1959. Not the U.S. government.

BLM insisted Cuba has “strong medical care and history of lending doctors and nurses to disasters around the world.”

Yes, it is America’s fault Cuba lacks COVID-19 vaccines and medicine. If Cuba had “strong medical care” it would not need America’s help.

“The people of Cuba are being punished by the U.S. government because the country has maintained its commitment to sovereignty and self-determination,” BLM ranted. “United States leaders have tried to crush this Revolution for decades. Instead of international amity, respect, and goodwill, the U.S. government has only instigated suffering for the country’s 11 million people – of which 4 million are Black and Brown.”

Something that as a Cuban has taken me years to fully grasp is how much our people have given to be free. We never accepted communism/socialism. Nobody voted for it. No Castro ever won an election in their lives.

This is why the whole "unprecedented" thing triggers me so much.

Assata Shakur is Joanne Deborah Chesimard, leader of the Black Liberation Army. She murdered New Jersey State Trooper Werner Foerster in 1973. He pulled her over for a faulty tail light.

Chesimard escaped prison in 1979. She found asylum in Cuba.

There aren’t many organizations more successful at grifting and being profitable at it than BLM. They’ve suckered so many capitalists into handing over hard-earned money, especially big dollars from big corp America. All while being anti-capitalist. They may have found the best grift that doesn’t require revolutionary takeovers to accomplish the transfer of wealth they want. The Castros would be quite proud.

How can you not love this is right when the dumpster fire that is Marxism burns.

For 4 days, Cubans have been on the streets of multiple US cities protesting, in support of the Cuban people and their cry for freedom, and against the barbaric regime that for more than 60 years has oppressed our people.
Now point to me how many businesses have we burned to the ground?
How many businesses have been looted?
How many people have been assaulted or beaten?
Where is the destruction and violence?
We are nothing like BLM and they are nothing like us.

Assata Shakur is a murderer, so of course she got protection from her fellow murderers in the Cuban government.

And go ask the people in Angola, Mozambique, Ethiopia, South Africa, or any other African country for that matter, what do they think of Cuba’s meddling in their affairs, about Cuban soldiers killing them.
Go ask Black Cubans what they think about Communism.

I have never sympathized with BLM, but this is the last drop.
They can all GFY.
Stay out of our way, you all POS communists.

That is Black Liars Matter, where lying is the least of their bad traits.

To hell with BLM. If they’ve proven anything, it’s that black lives *do not* matter to them. At all.

Not surprised by blm and d/progressive antics. They are nothing if not consistent in their condemnation of the US specifically and western culture in general.

If they were logically consistent it would be easier to overlook their tendency to export responsibility for their problems. Unfortunately they view western culture as a buffet line, where they can pick and choose this aspect but not that aspect.

Take the de colonize push. Was colonialism unpleasant even bordering on genocide in many places? Sure. But that wasn’t exclusive to the ‘new world’. Every group has been conquered at one or multiple points; Vae Victus.

As an example; humane rules of engagement, rules of war which derived from chivalry and the influence of western religion and philosophy. How about simple mercy? Reason and debate? English common law traditions?

If you want to throw out colonialism as an unmitigated evil then you don’t get to cloak yourself in the societal and legal protections colonialism brought to the ‘new world’.

My advice to the d/progressive and their antifa, blm anarchist allies is be very careful what you wish for.

Nice work. Those who wish to end western civilization had better rethink what the consequences will be. Two words there, western and civilization. They aim for the first one but ending a civilization will bring about murderous warring among groups the likes of which they can’t comprehend. I doubt these bold warriors are up for what they think they want.

No comment from Buy Large Mansions about how Mayorkas is refusing refugees from Cuba.

My jaw is on the desk.

May they ALL rot in he!!

Shows what side of the fence BLM is on, the Communists side.

“Can someone explain to BLM what happened in Cuba in 1959? Fidel Castro overthrew President Fulgencio Batista and implemented a one-state policy.”

BLM supports violent repression against protesters…. in Cuba. How do they have any credibility left?