“Leaders of the group were said to use nude photos and other compromising materials to keep lower-ranking members in line.” 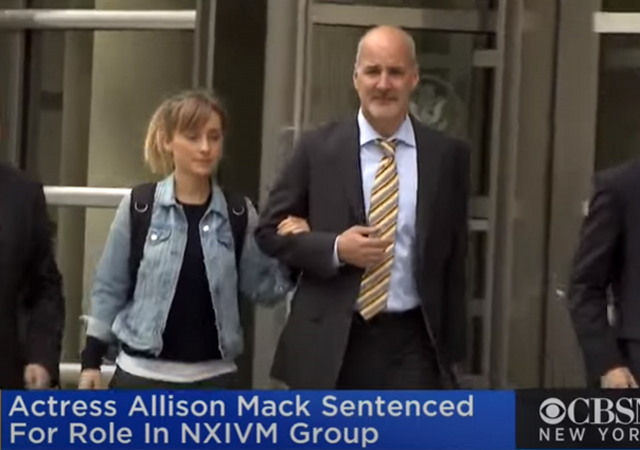 Hollywood actress Allison Mack has been sentenced to three years in prison for her role in NXIVM, which former members described as a destructive sex cult.

If this was not a true-crime story, you might expect it to be something Hollywood would dream up for a movie.

NXIVM started in New York state back in the late 1990s. It presented itself as a multi-level marketing company aimed at personal and professional development through attending seminars.

It eventually evolved into a cult that revolved around its founder Keith Raniere, who was sentenced to over 100 years in prison last fall.

Victims of the cult were primarily women, many of whom described a ritual in which they were branded with Raniere’s initials and expected to have sex with him at his whim.

Cynthia Little of Variety has details on the case:

Allison Mack has been sentenced to three years in federal prison, a stunning downfall for the fresh-faced actor who spent a decade as a fan favorite on “Smallville” but then became a key figure in the NXIVM cult led by convicted sex trafficker Keith Raniere.

Mack, 38, learned her fate Wednesday morning in federal court in Brooklyn from U.S. District Court Judge Nicholas Garaufis. She was arrested in April 2018 in Brooklyn after a wild trek with Raniere and others to Mexico, where Raniere was arrested in a villa outside Puerto Vallarta in March of that year.

“I made choices I will forever regret,” Mack told the judge, according to the Associated Press, adding that she was filled with “remorse and guilt.”…

During the hearing, one unnamed NXIVM victim made a statement via video. Actor Jessica Joan appeared in person in court to give a victim’s statement. “Allison Mack is a predator and evil human being, a danger to society with no care, remorse, or empathy for her victims,” Joan said.

Joan, who has said she suffered abuse and sexual trauma as a youth, called Mack and Raniere “the most evil monsters I’ve met.” In a statement after the sentencing decision was announced, Joan asserted that she does not believe Mack feels remorse.

Brendan Pierson of Reuters describes what some victims endured:

Before being sentenced, Mack tearfully apologized to her victims and her family, saying her actions while in the group were “abusive, abhorrent and illegal.” She said she had completely renounced NXIVM leader Keith Raniere, who was sentenced to 120 years in prison last year for sex trafficking and other crimes.

“Coming out from under this delusion has been the most difficult experience of my life,” Mack said.

Former NXIVM members testified at Raniere’s trial that he established a secret sorority within the organization in which “slaves” pledged total obedience to “masters,” with Raniere at the top as “grand master.” Women were kept on starvation diets, branded with Raniere’s initials and in some cases coerced into sex with him.

Leaders of the group were said to use nude photos and other compromising materials to keep lower-ranking members in line. Mack, who was both a “slave” of Raniere and “master” of other women, admitted in her guilty plea that she coerced two women into doing unpaid work by threatening to release damaging information about them.

In the smaller, central image below, you can see the brand. It’s the letters ‘K’ and ‘R’ for Keith Raniere.

This ABC News report from 2017 will give you some background on NXIVM if you’re interested in learning more:

It’s a cliché to suggest that truth is sometimes stranger than fiction, but it fits this case.

Will the higher up in the org be persecuted or will the Senater end the inquest?

She was 2nd in command wasn’t she? He got 120 years and she got 3. Which “higher ups” are you referring to?

Were the victims abused children? No.

Were the victims unlawfully imprisoned? No.

Were the victims tortured or beaten? No.

Were the victims adults who could freely leave? Yes, but caveats.

The crimes committed here are extortion and/or bribery. The ‘sex cult’ verbage strikes me as salacious headline crap.

It struck me the same way.

She deserves much worse than what Weinstein’s getting.

Incredibly Jim Jones people, wanting to abdicate their responsibilities for life to a Charlatan, much like Obama followers

That chick in the interview has no one to blame but herself. She could have stopped at any point… and didn’t

I thought she got off with an extremely light sentence until it was mentioned that she cooperated with prosecutors. Knowing that, it was only a somewhat light sentence.

In the justice system that let Hillary Clinton unscathed, this dumbass has the moral authority to just walk out of the court.

1) Kristin Kreuk was also accused of being involved
2) Kreuk denies it, also claiming she had no idea what Mack et al were up to
3) Kreuk was kept on Smallville for four seasons past her intended exit, despite being universally despised by the audience and her character having no reason to be there
4) She was set up for a superpowered spinoff of an original character with no connection to the Superman continuity
5) When that failed she got four seasons headlining a “reboot” of Beauty and the Beast, which was universally panned by critics and fans.

Not sure what any of that has to do with anything regarding this case, but what I understand Kruek’s denials of being involved to the extent Mack was is supported by the testimony of those who testified against Mack and Raniere.

This cult strikes as little more than a church social compared to encouraging children to mutilate their bodies to pretend to be the other gender with the coerced acquiescence of the medical community and society as a whole.

Unless we go full commie the criminal prosecutions for these cases of child abuse will be coming in the next ten years once these kids become adults and raise holy hell over their treatment.

If it weren’t for the extortion and blackmail activities, I’d be right with you. Those are the crimes here, all the rest is sensationalistic eyewash.

Just imagine that nearly every child star in Hollyweird is being brainwashed into that kind of crap.

Look closer at the brand. Mack’s initials are there, too.

Do they hold casting couches for prospective males and females?

Do they normalize transgender conversion therapy, including psychiatric, medical, and surgical corruption of boys and girls?

Do they sodomize boys and girls, and indulge in other trans-social, trans-humane kinks?

Do they cover-up the millions of socially liberal trans/homosexual male AIDS cases and excess deaths?

Do they deny and stigmatize early treatments, carry out planned parent/hood, force cargo cult-backed scientific mandates, and ignore the safety profiles of emergency use measures and medications?

Do they conflate logical domains to infer states and processes past, present, and progressive?

Do they sacrifice human lives to keep women appointed, available, and taxable? To appease feminists and masculinists alike?

Can they abort the baby, cannibalize her profitable parts, sequester her carbon pollutants, and have her, too? A minority cult that shows little to no progress.

I don’t quite understand what you said, but yes, they probably did conflate logical domains to infer states and processes past, present, and progressive.

If this was not a true-crime story, you might expect it to be something Hollywood would dream up for a movie.

Don’t give them ideas. It’ll come out as a “based on a true story”, about a family who moves to a small town looking for a simpler life.

Of course, there will be a couple other “insignificant” changes:
– The cult will be portrayed as a conservative Christian church. Probably Southern, and probably Baptist.
– The “Keith Raniere” character will be the church pastor, a charismatic, likable and good man … except for where he runs a sex cult and trafficking ring out of that locked “Special Purpose” room in the church basement.
– The “Allison Mack” character will be the Women’s Bible Study (and/or Book Club) leader, and instead of recruiting into a cult she’ll be grooming 8-14 year-old girls for sexual trafficking and/or underage (plural) marriage to church elders.

I expect it will also incorporate Hollywood/Harvey-Weinstein elements, such as:
– The whole church knows about it but they either don’t care, choose not to acknowledge it, or are active participants.
– The victims are coerced to go along and keep silent with not-so-subtle threats against their parents and/or siblings.
– Those who have spoken out, nobody believed (did I mention the local police are either church members or are being paid off by the pastor?), and they got shunned or excommunicated and left with nothing. They no longer appear in the church membership rolls, and not even their parents acknowledge them. They only exist as whispered names in dark corners.

At the end of the day, the “based on a true story” movie will be morphed into a propaganda attack against Christian churches, small town life, and conservatives in general. The producers won’t bother telling you which story it’s really based on.

American conservativism is Pro-Life, Liberty, and the pursuit of Happiness under a Constitutional framework that is world renowned for its equitable exclusion of diversity and other class-based bigotry. While social liberalism is a choice (not that Choice), it is discouraged by prevailing social standards (“constructs”).