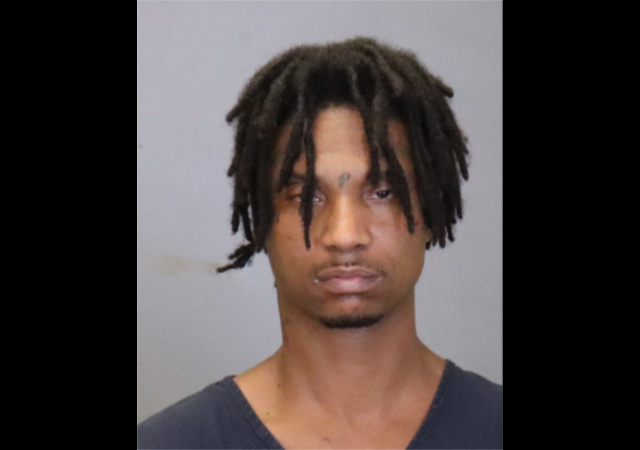 A black man accused of wounding five people in shootings in Alabama and Georgia claimed he specifically targeted white men because he felt they “had taken from him all his life.”

From The Columbus Ledger-Enquirer:

Though police allege Justin Tyran Roberts was involved in three separate assaults that wounded five people Friday and Saturday in Columbus and Phenix City, he was in Columbus Recorder’s Court to face charges in just one of those incidents, a shooting around 2 p.m. Saturday under the Oglethorpe Bridge at Broadway and Fourth Street.

That’s where a man was shot in the back as he was getting into his vehicle in a parking area under the bridge, said Detective Brandon Lockhart, who quoted Roberts as telling police, “I had to have him.”

The victim was hit once in the back, but four bullets hit his vehicle, and police found six shell casings at the scene, Lockhart said.

Roberts claimed these men shot “at him in a wooded area with a slingshot,” which left wounds on his body.

Police did not find any evidence to back up the claims.

Public defender Robin King asked that his client undergo a mental health evaluation. He said Lockhart’s testimony “has demonstrated that Mr. Roberts is having delusions and a disconnect from reality.”

Roberts faces charges of aggravated assault, using a gun to commit a crime, and being a convicted felon with a firearm. The court denied him bond.

Here are the other shootings Roberts allegedly committed:

The weekend shooting spree began about 8:15 p.m. Friday outside the Courtyard by Marriott hotel at 1400 Whitewater Ave. in Phenix City, where one man was wounded and taken to Piedmont Columbus Regional, Columbus Police Chief Freddie Blackmon said at a news conference Saturday evening.

Phenix City police said the victim in that case, a white man with short hair, was getting out of his car when a gunman walked up and shot him, before fleeing across the 14th Street bridge into downtown Columbus.

Roberts matches the description of the assailant in that incident, and authorities expect to file charges against him in Alabama, police said.

That shooting was followed two hours later by gunfire in the 1000 block of Broadway, where two men and a woman were hit, said Blackmon, who described those victims as two white males and a Black female.

Blackmon said they do not have evidence Roberts knew any of his alleged victims.

It would appear the constant anti-white drumbeat of the BLM, roundly applauded by the media and academia, is starting to bear fruit.

Crazy people (this fellow hasn’t had a formal psychiatric evaluation so we can’t be more specific just yet) will latch onto any excuse to commit terrible crimes. The BLM drumbeat is just one more. It’s important to recognize how such drumbeats can incite susceptible people.

But don’t hold your breath waiting for BLM to accept any responsibility for this shooting.

Convicted felon with a gun and using it, where have we heard that story before.

Was the gun a product of a B&E?

I’m waiting to the left to call it a hate crime.

The left will call it a Hate crime. They will point out that the Victim (the black shooter) suffered hatred his whole life due to White privilege and lately Whites were taking from him (of course his assertion must be true and if you deny them you’re racist). He was just defending himself against a society that was brutalizing him and so, judge, set him free on the grounds of self-defense.

“Now look what you made me do!”

These same leftists recognize the illogic of that statement when it comes from the mouth of a (white male) abuser.

The heart of leftist racism is the belief that blacks lack agency.

I am not entirely certain his defense of ‘cray cray’ is going to stick. The reason is that his behavior, violence v oppressors, seems to be motivated by his belief that ‘oppressors have taken/harmed/exploited him all his life’.

In essence he has actualized the belief system that underpins the CRT/equity framework; the population is divided into those who oppress and those who are oppressed. All he did here is carry through the desire stated by the speaker at Yale who wished to ’empty a revolver into the heads of ‘whites’; oppressors.

So if his belief system; CRT/equity is the basis for his defense that he is ‘cray cray’ then it follows that everyone who adheres to that belief system is also ‘cray cray’.

Therefore either he is not ‘cray cray’ in which case he stands trial or he AND everyone else with those beliefs is ‘cray cray’ and need to be provided counseling and/or medication and/or confined to a mental institution.

I wouldn’t bet on my little theory passing judicial muster but one can hope.

When everyone is insane – the sane are the crazy ones.

I am not entirely certain his defense of ‘cray cray’ is going to stick.

Oh, it will stick. And he’ll disappear into the mental health system for several months after which he’ll be quietly released back into society to commit more heinous crimes. Lather and rinse several times until one of two things happen. One, he’s finally imprisoned for a crime the courts cannot ignore or two, he’s shot dead while committing a crime. Either way, it’s society at large that suffers.

Will a Psychologist and a Judge be willing to publicly state that the ‘oppressor v oppressed’ beliefs are delusional? Especially when they will be vilified for doing so?

The DA will have to argue the opposite; that the ‘oppressors v oppressed’ belief system is NOT a valid basis for an insanity defense. That the CRT/Equity framework is, in fact a very mainstream idea and is held by reasonable people.

This could be far more interesting than we might think at first blush.

I think you are oversimplifying. You don’t understand how the regular mental gymnastics and academic chicanery in criminology departments works. I don’t think it will go down quite like that. However, I also don’t think that the academic arguments can convince a jury of his betters from the state of Alabama.

It’s a bit of a stretch but not so much as to be impossible. Unlikely? Sure.

I do think it’s going to entertaining watching the contortions as they try to avoid my scenario.

No, all some “psychologist” is going to have do do is certify this thug”non compos mentis” and “not competent to stand trial” and that will be it. The judge will agree (they always seem to in these cases) and that will be it. Nobody has to declare the “oppressor v oppressed belief system” delusional or anything else.

It’s a little complex than that. The CT does not simply say ok sure to an assertion. There’s a hearing and testimony and deposition and evidence and a battle of expert witnesses and so to forth.

D – My client is insane.

D – I’d rather not say…but my expert witness says he is!

P – I want to see the clinical notes and have my expert review all this then I want to depose his expert.

Killing someone isn’t an insane act. Insanity is the beliefs that caused the act. That’s why a person judged insane isn’t responsible for his acts.

If this guy said an ‘inter demon from planet X-Ray’ told him to do it and he had a diary of 18 months of daily journal entries noting the discussions with the demon that clearly chronicled his descent into madness this would be simpler.

As tragic as this is, the preliminary motions, hearings and trial should be more entertaining than most.

No wonder Dementia Joe and Merrick Garland consider white supremacy to be the biggest threat to our country.

You have one today’s prize for Master of Sarcasm.

The universal defense when your public defender has no other defense for your behavior and you’re black. Request a “mental health evaluation” and hope that it comes out the black is somehow not mentally fit to stand trial. You know, it isn’t his fault he deliberately targeted whites in his shooting spree. He was delusional at the time. He didn’t know what he was doing was wrong. Blah, blah, blah. Etc, Etc, Etc. And the sad part is that the liberal courts readily accept these excuses for blacks so that they don’t have to jail them. Because holding a black responsible for their crimes is RAYCIST!!! after all. So the courts do everything in their power to prevent that from happening.

Capital punishment is a legal penalty in the U.S. state of Alabama.

Once you go Pro-Choice… Elective abortion a la lynching, if not for commission of capital crimes, bu light and casual causes including social progress, is a legalized, forward-looking rite everywhere. Including a novel self-defense of property to justify murder of an unarmed female veteran, caught in a vulnerable position, surrounded by security personnel.

That’s a face that has “winner” written all over it.

Not to mention his finely honed fashion sense.

I’m reading this article and wondering what this young tycoon could ever have had that any white person — or any person, really — would find valuable enough to keep “taking from him.”

I simply can’t imagine… unless it came in clear plastic bags.

He was denied a job doing laser physics research for Lockeed-Martin. Some qualified white person got the job.

He should have applied to be a pilot for American. .

Funny, Gordon Gould was a personal friend, also a chain smoker, and that did him in.

Just remember FBI is under a lot of pressure not to count inconvenient hate crimes.

“Public defender Robin King … said Lockhart’s testimony “has demonstrated that Mr. Roberts is having delusions and a disconnect from reality.”

So his defense is that he is a Democrat?

This is reminiscent of the black trans/homo male who selected and aborted white males.

Keep saying Leftists are saying their opponents to BLM and Antifa are sub humans exactly like the Communists and Nazis did. If your opponents are sub human there is no reason to spare them or feel remorse if you rob or hurt them.

So when they say “try to be less white,” this is actually public safety advice.