Hamas Upset That Rep. Ilhan Omar Compared Its Conduct To That Of U.S. and Israel

Hamas Upset That Rep. Ilhan Omar Compared Its Conduct To That Of U.S. and Israel

When you’ve lost Hamas: “We appreciate Mrs. Ilhan Omar’s stances in defending justice and the rights of the oppressed around the world, foremost of which are the just rights of our Palestinian people, but we deplore this unfair combination that is contrary to justice and international law.” 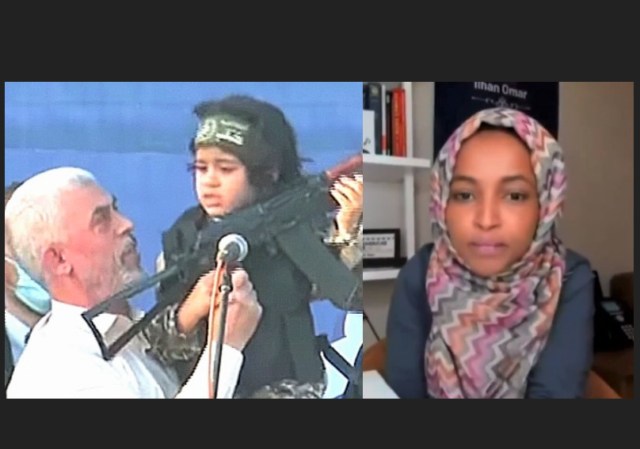 Representative Ilhan Omar (D-Minnesota) recently compared the conduct of the U.S. and Israel to Hamas and the Taliban:

“We have seen unthinkable atrocities committed by the U.S., Hamas, Israel, Afghanistan, and the Taliban.”

We must have the same level of accountability and justice for all victims of crimes against humanity.

We have seen unthinkable atrocities committed by the U.S., Hamas, Israel, Afghanistan, and the Taliban.

I asked @SecBlinken where people are supposed to go for justice. pic.twitter.com/tUtxW5cIow

“Equating the United States and Israel to Hamas and the Taliban is as offensive as it is misguided,” said the lawmakers. “Ignoring the differences between democracies governed by the rule of law and contemptible organizations that engage in terrorism at best discredits one’s intended argument and at worst reflects deep-seated prejudice.”

They concluded: “The United States and Israel are imperfect and like all democracies, at times deserving of critique, but false equivalencies give cover to terrorist groups. We urge Congressman Omar to clarify her words placing the US and Israel in the same category as Hamas and the Taliban.”

That caused Democrat leadership, once again, to scramble to deflect from and protect Omar, House Dem Leadership Pretends Ilan Omar Has Clarified Her Comparison of the U.S., Israel to Hamas, Taliban.

You know who else was unhappy? Hamas, which felt that comparing them to us was unfair to them.

The recent statements of Mrs. Ilhan Omar, a member of the US House of Representatives, in which she equated the victim with the executioner, are very surprising, as she equated the resistance of the Palestinian people on the one hand, and the crimes of the Israeli occupation in Palestine and the American aggression in Afghanistan on the other.

We appreciate Mrs. Ilhan Omar’s stances in defending justice and the rights of the oppressed around the world, foremost of which are the just rights of our Palestinian people, but we deplore this unfair combination that is contrary to justice and international law.

The Palestinian people have been living under the Zionist occupation for more than seven decades, during which they suffered a lot, and the most heinous crimes were committed against them. Throughout these decades, they remained steadfast, fighting for their freedom and independence, given all opportunities, showed a lot of flexibility, and paid very high prices to achieve these rights by peaceful means.

However, the other side refused to comply with all international resolutions, and continued its arrogance and oppression of our people and threatening international stability and security, and unfortunately, with the full support and protection of successive US administrations.

Our people under occupation enjoy their inherent right to resist the occupation by all available means, including armed resistance, and here we remember the famous saying of the international activist Nelson Mandela: “It is always the oppressor, not the oppressed, who dictates the form of the struggle,” what our people have done over the years The past, and what we are doing now, is a legitimate and guaranteed right.

Nevertheless, the Hamas movement presented many initiatives, the first of which was on the lips of Sheikh Ahmed Yassin, the founder of the movement, and the latest of which was the statements of the movement’s leader in Gaza Yahya Sinwar after the last aggression, the need to spare civilians the scourge of the conflict and the movement’s keenness on that, but all these initiatives were rejected by the occupation The Zionist, and indeed, in every aggression, the last of which was the aggression on Gaza for 11 days, deliberately and brutally targeted civilians, with no aim other than to raise the humanitarian cost of this aggression, in the hope of breaking the will of our people and their support for the resistance forces.

The movement, on more than one occasion, welcomed all the international investigation committees, and expressed its readiness to cooperate with them in order to achieve justice and hold the aggressors accountable, at a time when the occupation completely refused to cooperate with them and allow them to reach the Palestinian territories.

Accordingly, we look to Mrs. Ilhan Omar, and all defenders of Palestinian rights, to describe things correctly and accurately, because this is the most important starting point for laying the foundations for a just solution to this chronic conflict. 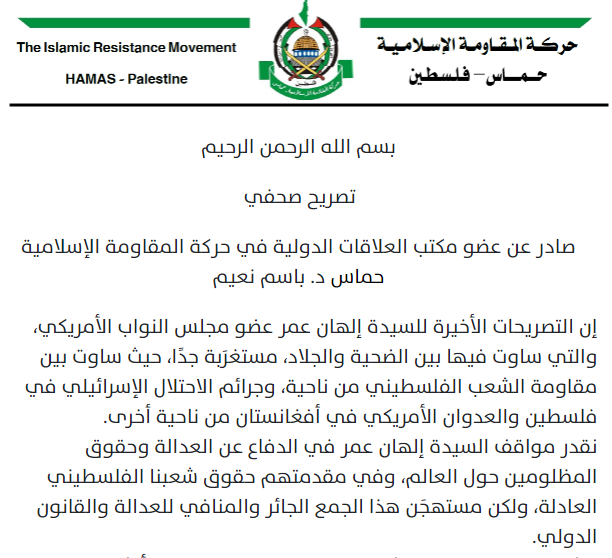 Here is Hamas leader Yahya Sinwar, who Israel targeted but was unable to kill in the recent conflict, lifting a child holding a weapon during an appearance in Gaza after the ceasefire:

Dear Hamas: I double-dog dare you to do something about it!
Sincerely, Rep. Ilhan Omar.

Ilhan Omar not having any committee assignments in 2022 sounds good to me.

“just rights of our Palestinian people”

Those people are really lucky no one has given the justice they have coming.

Seeing the words “oppressor” and “oppressed” makes it obvious who’s doing the talking. It makes dismissal so much easier.
.

Prof J, are you sure you didn’t accidentally quote the Babylon Bee? This sounds exactly like it would fit there.

The sheer effrontery of this passage blows me away:

the occupation The Zionist […] deliberately and brutally targeted civilians, with no aim other than to raise the humanitarian cost of this aggression, in the hope of breaking the will of our people and their support for the resistance forces.

Hamas bombed out with the Associated Press.

It baffles me. Don’t they understand that if Israel were like them, that Israel would be a massive middle-eastern empire?

How do they not understand the vast difference in military might?

Understanding is not their problem and getting more knowledge is not the answer. They know who they are and what Israel is. The issue is their endeavor to convince others of the false dichotomy they must defend, for if they told the truth they would be exposed.

I forget that sometimes. I constantly need a reminder that some people know they are wrong and lying but choose their evil anyways.

We got a real loser when Omar emigrated here.

Immigrated, not emigrated. She emigrated from Kenya; she immigrated to the USA.

You can’t make up this stuff.