“To prevent a surprise Republican victory, Stansbury got help from national Democratic groups and politicians.” 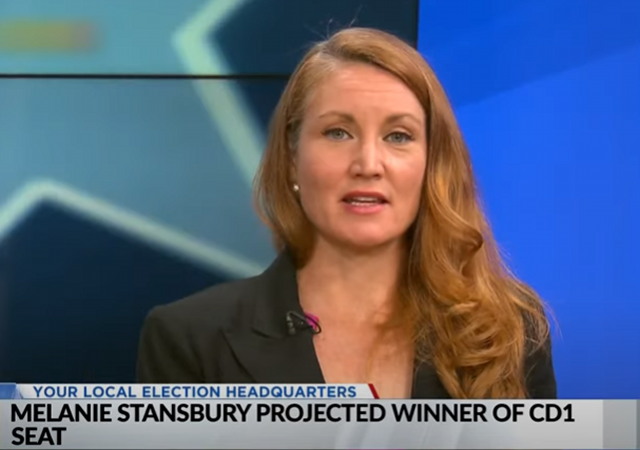 Democrat Melanie Stansbury won the special election for New Mexico’s 1st Congressional District. However, Republican Mark Moores made a play for the seat in this deep-blue district by attacking Democrats on rising crime.

Democrats may have won, but this race made them nervous. The GOP should go after seats like this across the country. You can’t win if you don’t play.

The race to represent New Mexico’s 1st Congressional District, which includes Albuquerque, was called by The Associated Press after polls closed at 9 p.m. ET. Stansbury prevailed in a four-way contest after campaigning in support of major initiatives of the Biden administration. Her victory shores up the Democrats’ narrow 219-211 majority in Congress ahead of the 2022 midterm elections.

Critics argued that Moores, a state senator, exploited the rising murder rate in Albuquerque and called Stansbury soft on crime for supporting the BREATHE Act, which has provisions to cut federal funding from police departments.

This race was not a walk in the park for Stansbury. Democrats brought in the big guns to protect this seat.

Democrats fended off a Republican attempt to make New Mexico’s First Congressional District special election a sign of a red wave to come in 2022, with Melanie Stansbury projected to win the seat. The presumed victory comes after some help from national Democrats flying in to campaign for her and funneling donations her way…

To prevent a surprise Republican victory, Stansbury got help from national Democratic groups and politicians. The Democratic National Committee, New Jersey Sen. Cory Booker, and others blasted their email lists with fundraising appeals for Stansbury. Second Gentleman Doug Emhoff, husband of Vice President Kamala Harris, and House Democratic Caucus Vice Chair Pete Aguilar of California traveled to New Mexico to campaign for her in the last week of the election.

Democrats are cheering for Stansbury’s win, but this district went for Biden by over 20 points in November.

They should not have had to play defense here.

To prevent a surprise Republican victory, Stansbury got help from national Democratic groups and politicians. The Democratic National Committee, New Jersey Sen. Cory Booker, and others blasted their email lists with fundraising appeals for Stansbury. Second Gentleman Doug Emhoff, husband of Vice President Kamala Harris, and House Democratic Caucus Vice Chair Pete Aguilar of California traveled to New Mexico to campaign for her in the last week of the election.

they were never worried about this seat

No one is surprised that the Democrat won. The question that remains for all elections is do the returns announced represent actual votes cast or manipulation by the Democrats? That is the permanent question in all elections henceforth.

Yeah maybe. This was a +22 Biden district so without substantial external assistance this wasn’t a surprise. IMO, the RNC should have put more effort and funding into this race. ABQ media buys would have been seen statewide so it would have begun the process of messaging for 2022/2024.

The key is to field candidates that are capable of advancing the ball. Folks that can reach into every community, find disillusioned voters and get them to register, organize and vote. Then return cycle after cycle to continue to build upon the previous efforts.

I once considered NM as a possible “vote with my feet” bugout location, due to them having slightly more reasonable gun laws (at the time) than Arizona. I’m so glad I didn’t. Had I known at the time how Albuquerque Democrats swing the entire state with impunity, like WWE’s Cesaro, it would never have made the list.

Albuquerque (and Santa Fe) apparently are to New Mexico as Portland is to Oregon.

The final results were:

That is a difference of almost 25%. By contrast, the previous Communist candidate (Haaland) won in November 2020 58.2% to the Republican candidate’s 41.8%, a difference of less than 17%. What happened yesterday was a blowout loss – period.

The questions the Franz von Papen Republicans should be asking themselves (but probably won’t) are:

1. Was Moores a lousy candidate, or was he the best the GOP could do?
2. Did the GOP actually commit sufficient resources to try to win (like GOTV and poll watching)? Or did they do what they usually do in a long-shot election: blow a ton of dough on Washington-centric campaign consultants who have become adept at losing?
3. Does the Congressional Republican leadership’s weird focus on trashing Trump and Trump voters (while rubber-stamping the Communists’ agenda) actually do any good for the GOP?
4. Did ignoring (or even helping) the gargantuan voting fraud that put Biden* in the White House encourage more voting fraud?

Was just going to post something similar. Mike says, “Democrats may have won, but this race made them nervous. The GOP should go after seats like this across the country. You can’t win if you don’t play.” Biden won by 22% in this district, this donk wins by 25%. That is absolutely not where we should be spending our money. We may as well be donating to Pelosi’s challenger. As a test case, I get it. As a plan for the future, this is not the way. Cory Booker and the “2nd Gentleman”? These were the “big guns”? What is the name recognition of Doug Emhoff and Pete Aguilar? This was a huge loss and should not be spun any other way. A lesson learned? Yes. A roadmap to victory? You can’t be serious.

I am OK with having the GOP going into heavily Communist districts and waging spirited, aggressive, smart campaigns. But the lefty GOP, run by overpaid Washington consultants interested only in fattening their bank accounts – will simply waste a lot of the money on themselves. I strongly suspect that is what happened here.

If you are going to fight in a district like this, it has to be an all-out guerilla campaign with no quarter and no mercy. The emphasis should be on an army of volunteers going door to door, not fat cat consultants and useless focus-group polling. Every single voting place should have poll watchers, and even the slightest questionable ballot or voter should be a cause for thermonuclear legal warfare.

But the GOP – which despises its base – doesn’t want to do that.

Moores is/was the typical suburban RINO. He played up the tired “I have a history of working across the aisle” schtick, desperate to appeal to the left-center local media as a moderate. He got that endorsement, but it didn’t matter – because voters didn’t come out. It was low turnout across the board, guaranteeing a Dem victory in a heavy blue district.

The shame here is that: a) Moores was a better than average GOP candidate for this district, and b) Stansbury was a terrible candidate, largely disliked by her own party who barely survived her primary because of it.

NM-1 is a majority Hispanic working class district, and Stansbury is a stereotypical rich, white, “resist” leftist. The Dem primary got pretty nasty because Stansbury was called out for her hypocrisy of preaching “equal representation” while taking the nom from a Hispanic woman. The expectation was that Moores (a Hispanic) would continue playing that race card and win over a sizable chunk of independent/ disaffected liberal Hispanics – but he never went that route. Moores used the Romney playbook for his campaign, and the numbers speak for themselves.

I live in CA. Charles Manson (D, Dead) wins by 20 pts. The GOP spending any money or attention on this race was silly. But, we are talking about the GOP.

Still… after all the destruction of our Country in the last 6* months, it is depressing

You know what is really depressing?

That doesn’t mean it’s over for the Dems. The Dems are out of options and cannot complete any more of their agenda unless the Republicans vote for it. So the ball is now in Republicans’ court. Again. Will they once again snatch defeat from the jaws of victory? Time for Trump to start kicking butt.

The “good news” is that the folks who voted for Stansbury will get the quality of congressional representation they so richly deserve. (*Smirks and rolls eyes*)