“I was confident all along that a fair investigation would clear me. Yet I find myself not happy but rather upset that I was suspended and investigated in the first place. This never should have happened, and I hope that it doesn’t happen to anyone else.” 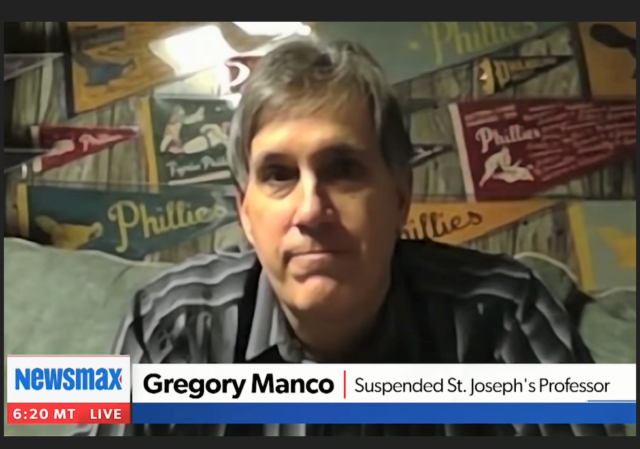 Mathematics Professor Greg Manco of St. Joseph’s University in Philadelphia was targeted by students over tweets Prof. Manco made under a pseudonym opposing slavery reparations.

The case had all the signs of the scourge of cancel culture that swept academia and the nation starting with the Black Lives Matter protests and riots after the death of George Floyd: Student crybullies weaponized their feelings to demand that a professor be fired or reprimanded for expressing a view with which they disagree, because having such a heretic on campus makes them feel “unsafe” or “unwelcome.” In many cases administrations capitulated to the mob and fired or denounced the professor in the finest tradition of the Maoist Cultural Revolution, in rare cases the priciple of academic freedom was upheld without caveat.

Manco’s time at St. Joseph’s has been uneventful until now. For reasons that are not immediately clear, someone or some persons targeted Manco to try to get him fired. They somehow learned that he was the person behind the South Jersey Giants Twitter account, and then complained (archive) to St. Joseph’s on Twitter, which then promised immediate action (archive)….

Knowing that the complaints were going to be public and that the school student newspaper was planning on running a story about it, Prof. Manco decided to go public on his Twitter account, in a thread (archive) laying out what has happened….

Students then used another familiar tactic, filing complaints about Prof. Manco’s alleged classroom and other campus conduct as a way of getting around the problem of off campus speech being protected by academic freedom. We saw this tactic used against Prof. Charles Negy at the University of Central Florida, where with administration encouragement complaints of on campus conduct were used as retaliation for protected faculty speech, resulting in Prof. Negy’s firing.

Prof. Manco almost immediately was put on paid leave, then stripped of his teaching respondibilitis pending the conclusion of the investigation. The investigation, in most cases, is punishment itself, regardless of result. Here, Prof. Manco received support from an online petition and also from the Foundation for Individual Rights in Education, as we covered in The FIRE: St. Joseph’s U violated academic freedom of Prof. Greg Manco.

As first reported by The College Fix, Prof. Manco has been cleared in the investigation:

A three-month investigation into the Twitter history of math Professor Gregory Manco has been concluded and Saint Joseph’s University administrators have determined that it is not possible to conclude the educator violated any campus policies.

“In this case, a definitive determination could not be made due to insufficient evidence,” she said.

Here is the text of an email to me from Ms. Benner of St. Joseph’s about the outcome:

The University received more than a dozen reports of alleged bias or discriminatory conduct in the classroom and on social media submitted by current and former students. The University’s policies obligate and guide its response to these reports. A thorough review and investigation, conducted by an independent third-party, considered the totality of the information gathered and assessed the submitted reports, which allege bias or discriminatory activity from four years ago through this year.

As an institution of higher education, Saint Joseph’s will continue to prioritize fostering a safe learning environment and the exchange of ideas is integral to this effort. We support the rights of our campus community to express their opinions in a respectful and responsible manner that furthers our commitment to a diverse and inclusive community, strengthened intellectually and socially by the range of knowledge, opinions, beliefs, perspectives, identities, and backgrounds of its members. Furthermore, we encourage our community to report concerns of bias, discrimination and harassment so that the University can address the issues promptly and according to existing policies.

This email and public position by St. Joseph’s is problematic. It is my understanding that in fact there is a written report by the University that clears Prof. Manco. If that is the case, then St. Joseph’s should have offered Prof. Manco complete public vindication, not a weakly worded statement about “insufficient evidence” for “a definitive determination.”

“It is obvious when you read our faculty handbook and anti-discrimination policy that there never should’ve been an investigation in the first place,” Manco told The College Fix this week. “Not to mention my immediate, mid-semester removal from the classroom and baseball field, without any due process regarding that extreme measure.”

“While the external investigation has vindicated me, it is still ultimately up to the university to renew my contract as I am full-time but non-tenured,” he said. “This usually happens each year in late spring so I will know soon.”

“I can take some comfort in knowing that such a decision of reappointment cannot be based even in part on a violation of a faculty member’s academic freedom.”

Prof. Manco provided this statement to me:

“I was confident all along that a fair investigation would clear me. Yet I find myself not happy but rather upset that I was suspended and investigated in the first place. This never should have happened, and I hope that it doesn’t happen to anyone else.”

It’s not clear that Prof. Manco has won, yet. He is on one-year renewable contracts, so it remains be seen if St. Joseph’s will renew Prof. Manco.

Additionally, don’t underestimate the damage that is done by being the subject of such torment, both to the individual and the campus free expression climate. The student crybullies pay no price for their abuse of process, and achieve a great deal because they silence others who do not want to be the next target. Prof. Manco’s Twitter account is now locked, and professors and students at St. Joseph’s will learn the lesson to keep quiet.

Won’t stop until the crybullies are publicly named, shamed, and punished.

As Mark Steyn often says, with good reason, the process is the punishment. The mob didn’t succeed in taking a head but still sent a clear warning to everyone else.

Why are these “students” in school? They are already have enough knowledge to know it all

“[D]on’t underestimate that damage that done by being the subject of such torment, both to the individual and the campus free expression climate. The student crybullies pay no price for their abuse of process, and achieve a great deal because they silence others who do not want to be the next target. Prof. Manco’s Twitter account is now locked, and professors and students at St. Joseph’s will learn the lesson to keep quiet.”

I just ran across this quote from Solzhenitsyn’s “In The First Circle”:

“It was a universal law, with no exceptions: Ruthlessness always wins. All history, alas, and all the prophets bore witnesses to it.” (p. 580)

What, one wonders, is “respondibilitie”?

“The student crybullies pay no price for their abuse of process, and achieve a great deal”

And this is precisely what needs to change. In a perfect world, Manco could sue the school for libel and for violating their own procedures, while suing the complaining students for bullying and harassment. In the world I thought we once had, he probably wouldn’t have a case against the students but still would against the college. And he could make the point to the administration that the way to avoid these kinds of lawsuits in the future is to stop giving kneejerk credence to the bullshit tactics of student crybullies.

The individuals behind the cancellation attempt are not current students.

A most reasonable statement, if “safe learning environment” refers to physical safety.

But when you extend the meaning of safety to emotional emotional safety you give license to anyone who claims to have been made uncomfortable to silence whoever said or did something you disapprove or disagree with, don’t you?

Has it become impossible to assert, “If you’re a student at an institution others will challenge your beliefs, and if you can’t handle this the solution is not to shut others up but for you to wait until you have the maturity and psychological robustness to withstand an environment where your beliefs may be (and probably will be) challenged?

St. Joseph’s should clarify whether “a safe learning environment” requires its faculty to advocate in favor of “reparations,” or merely remain silent; and also whether discussing the criteria for awarding and imposing “reparations” may be discussed, or are taboo.

It seems to me that if the issue of “reparations” (wealth redistribution) makes anyone feel unsafe, it should be those from whom assets would be taken, not those to whom the assets would be given.