“SJU’s investigation into Manco[‘s tweets] violates the university’s public promises to respect freedom of expression and academic freedom. We call on SJU to rescind Manco’s suspension, cease its investigation, and reassure its faculty that it remains committed to the rights it promises to them.” 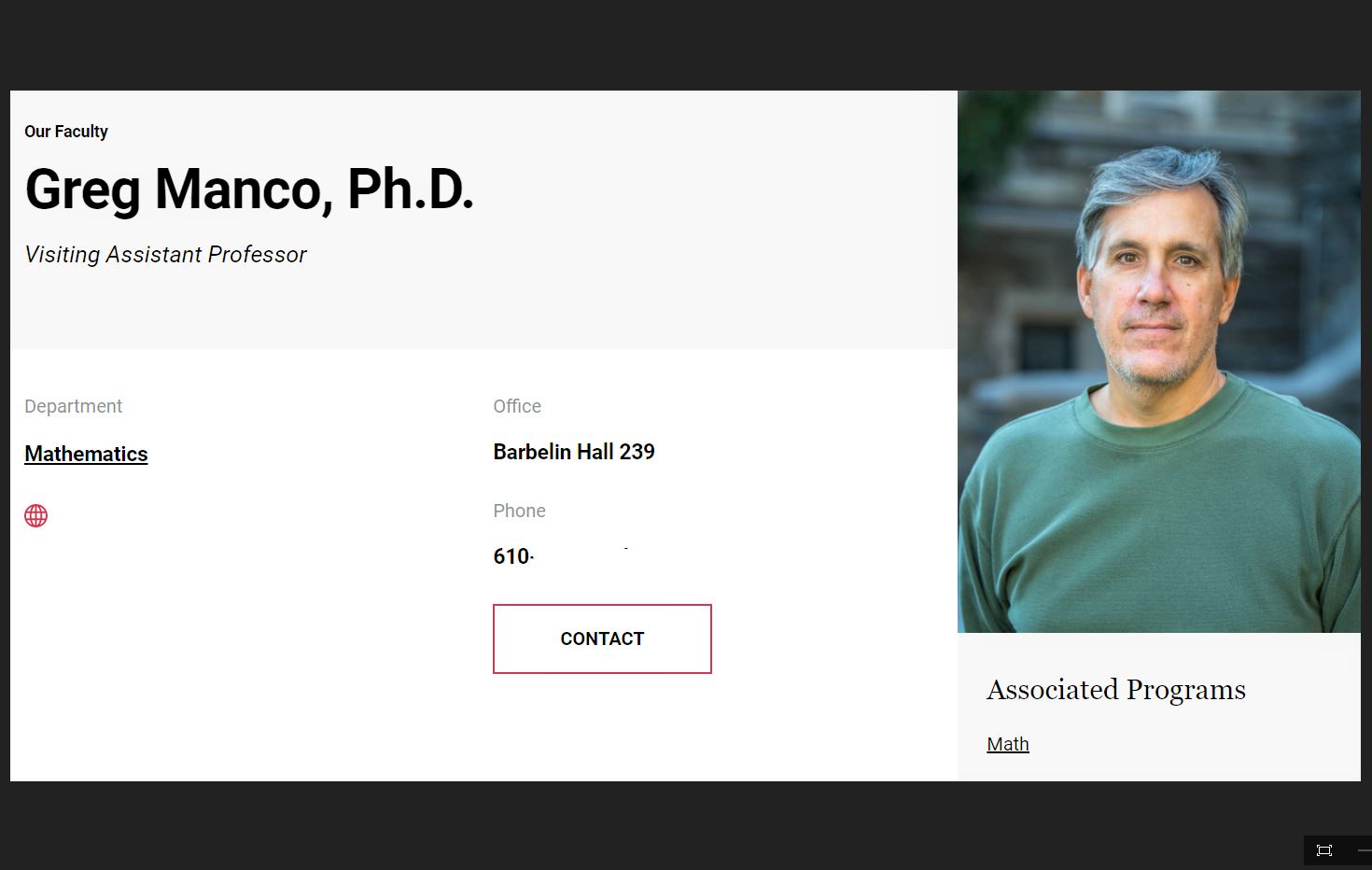 We detailed Manco’s targetting by as-yet anonymous Twitter and social media accounts complaining about a small number of tweets from Manco’s pseudonymous account — so they doxxed him and then sent the tweets to St. Joseph’s twitter account which promised quick action. See this post for the details, Saint Joseph’s U Math Prof. Gregory Manco Targeted For Cancellation Over Tweet Opposing Reparations.

Manco immediately was put on paid leave, and is not permitted to teach his class pending investigation. This immediate action is completely out of proportion to the content of the tweets, which did not threaten any violence or anything else that reasonably could be perceived as posing a threat to campus safety such that Manco was not permitted to continue teaching his class.

But it gets worse, there appears to be an effort to expand the claims against Manco beyond the tweets. This is the tactic used against University of Central Florida (now fired) Professor Charles Negy, where the activists trying to get him fired and the university itself enouraged complaints about Negy’s classroom conduct. UCF, knowing it couldn’t fire Negy for his tweets, then used the pretext of (the new) complaints about classroom and other non-tweeting conduct to fire him.

I don’t know if St. Joseph’s has the bad intentions that UCF had, but it’s clear that is the direction the people lined up against Manco are using. This Twitter account is making the claim there were complaints unrelated to the tweets, but that seems unlikely given St. Joseph’s twitter response reacting to the tweets as well as other reporting.

The St. Joseph’s student newspaper also reports on the investigation being prompted by the tweets:

In response to questions from The Hawk, Gail Benner, interim chief marketing and communications officer and director of PR and Media, confirmed on Feb. 22 in an email to The Hawk that Manco “will not be in the classroom or in a coaching role while the investigation is conducted.”

Nicole Stokes, Ph.D., associate provost of Diversity, Equity and Inclusion, said at a Feb. 22 University Student Senate (USS) meeting that while the investigation is ongoing, no details will be released.

Stokes was invited to the USS meeting to update students about the status of the investigation.

On Feb. 19, students took screenshots of tweets from Manco’s account, posted them on their own social media accounts and tagged the university. The university responded, “Thank you for bringing this to our attention. We are looking into this immediately.” ….

In her Feb. 22 response to The Hawk, Benner wrote: “Saint Joseph’s strives to be an inclusive and diverse community that cares for the whole person. We thank our students for bringing to our attention a possible violation of our values.”

St. Joseph’s needs to keep in mind that one of St. Joseph’s values, and contractual obligation, is to protect the academic freedom of faculty to speak on matters of public importance.

The Foundation for Individual Rights In Education (the FIRE) has issued a call for St. Joseph’s to end the punishment of Prof. Manco, and has sent a letter to St. Joseph’s reminding St. Joseph’s of its obligations:

FIRE is concerned by the suspension of, and investigation into, Professor Gregory Manco by Saint Joseph’s University (SJU) in response to posts on his personal Twitter account. While these posts—which do not involve any other member of the SJU community—may be offensive to some, they are an exercise of the right to “speak or write as citizens . . . free from institutional censorship or discipline” promised to him as a faculty member at SJU.

Accordingly, SJU’s investigation into Manco violates the university’s public promises to respect freedom of expression and academic freedom. We call on SJU to rescind Manco’s suspension, cease its investigation, and reassure its faculty that it remains committed to the rights it promises to them.

The FIRE letter also provides more details on what has happened, including how the complaints against Manco, in St. Joseph’s own words, are “evolving”:

On February 19, 2021, Manco was called into a Zoom meeting with Mathematics Department Chair Kristopher Tapp, College of Arts and Sciences Dean Shaily Menon, and Chief Human Resources Officer Zenobia Hargust. Manco was informed that he was being placed on paid leave pending an investigation into his tweets.

Later that day, Manco received a follow-up email from Hargust confirming that SJU was investigating “online postings . . . of a biased or discriminatory nature” and citing the “evolving nature of multiple student complaints” and the concern “about the impact on students in the classroom.”8

Manco’s students have also been told that Manco will not be returning to teach his courses for the remainder of the semester.

Manco has a meeting with Alexandra Morrison, SJU’s Title IX Coordinator, today, February 23, at 1:30 PM, “to discuss next steps and answer any questions” about the investigation “regarding activity on [Manco’s] Twitter account.”9

As SJU is a private institution, the First Amendment does not compel it to grant faculty expressive freedoms. Nevertheless, SJU has made clear commitments promising its faculty freedom of expression and academic freedom. These commitments represent not only a moral obligation, but a contractually-binding legal duty on the part of the college.

Most pertinent here is SJU’s adoption of the American Association of University Professors’ 1940 Statement on Academic Freedom, including its commitments that when professors “speak or write as citizens, they should be free from [university] censorship or discipline.”10 This commitment is also recognized in SJU’s “Interim Policy Prohibiting Discrimination, Harassment and Retaliation,” which quotes the 1940 Statement and affirms that “Saint Joseph’s strongly supports and protects the principle of academic freedom.”11 These are rights that inure to the benefit of all members of SJU’s community. SJU makes clear, public commitments to uphold the expressive rights of faculty and students. 12 Eroding the rights of Manco represents a threat to the rights of all students and faculty at SJU.

It’s unclear what is happening on campus, but it is clear that accusations of racism will be used against students who support Manco. A Change.org Petition supporting Manco has over 300 signatures as of this writing. 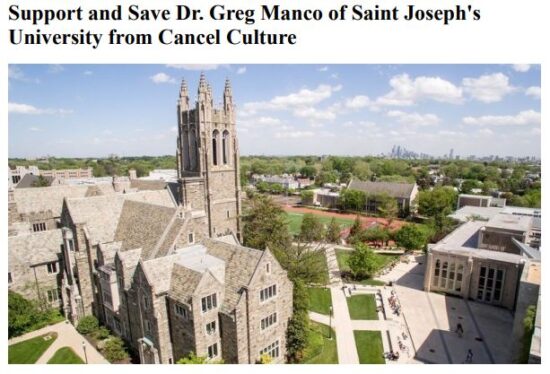 But some of the activists are trying to prevent students from signing by threatening to accuse them of racism. This is part of a message being circulated on Instagram, and sent to me by someone at St. Joseph’s: 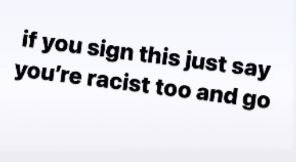 A counter-petition has been launched calling for Prof. Manco to be fired:

Calling for accountability in light of RACISM is not “cancel culture”.

Dr. Greg Manco of Saint Joseph’s University is currently on PAID LEAVE during an investigation regarding his racist tweets on his account. This man should not be given an investigation, he should be fired for his remarks and actions.

Making transphobic and racist comments is not an excusable act in 2021. It is not a difference of opinions, it is disrespectful, unkind, and unacceptable.

This man has no place on a campus that is supposed to be driven by Jesuit Ideals of education and social justice. Blatant and pubic disrespect for people experiencing poverty, racism, sexism, and so much more is unacceptable.

This man needs to be removed from his position as an educator.

We obviously don’t know where this is heading for Prof. Manco. Hopefully, St. Joseph’s administration will not bow further to the mob, and will stand up unapologetically for academic freedom.

Woke Progressives ACTUALLY do the things they accuse conservatives of doing.

They just package it in way that makes it seem virtuous and tey get the media to repeat it often enough that it seems rational and seems like everyone agrees.

Time to turn the tables and call THEM out.

So can we find out who created the counter petition and cancel them?

“Making transphobic and racist comments is not an excusable act in 2021. It is not a difference of opinions, it is disrespectful, unkind, and unacceptable.”

What happens to “I disagree with what you’re saying, but will defend to the death your right to say it”? Yeah, that so old fashioned. Sorry, saying something disrespectful and unkind doesn’t make it unacceptable.

The public funding rule should be applied. Constitutional rights must be extended, even on “private campuses” if they accept public money directly or through student tuition support. This also explains amy barret. Catholic universities have been compromised for decades.

A recent Ipsos poll shows 80% of the people in the US oppose reparations. Those 80% all need to be fired from their jobs.

The essence of a university is that anything at all can be said provided you think it is true. That’s how professing comes about.

Let’s see if Manco’s student supporters have the backbone to defy the bullying tactics of name-calling, shaming, and doxxing.

Students behind attacks on Prof. Greg Manco should be expelled from the university. That would send a clear message.

Since US slavery was wholly owned, endorsed, and defended by the Democrat party, they should be on the hook for reparations. Tax all registered D’s to pay for the obscenely expensive reparations scheme, and leave the rest of us freedom loving folks alone.

That St Joe’s doesn’t know this is ironic and tragic. And not for Manco