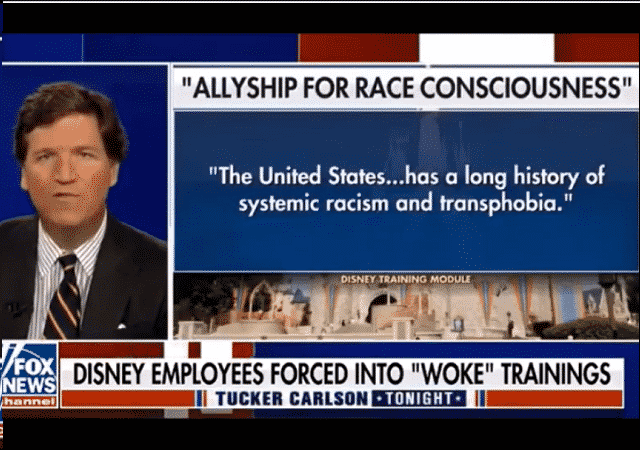 Christopher Rufo broke the story of Disney’s anti-American, racist indoctrination of its employees, and the news of Disney’s woke crusade against white people quickly went viral.

Disney initially responded with a non-explanation riddled with virtue signalling gibberish, but as the pressure mounted, Disney has reportedly removed the controversial, divisive, destructive, racist propaganda from its internal company portal.

It’s not clear at this point if Disney is simply recasting the same toxic training modules in the newly-adopted language of the neo-racist radical left or if they are indeed abandoning this toxic brew designed to instigate civil unrest.

Good!! It was racist!

“That’s one small step for man, one giant leap for mankind.”

Damn dude. I didn't think taking on Disney was possible.

Disney is very susceptible to public pressure, far more so than Congressional Democrats.  They are also much more vulnerable to leaks, so there is hope in confronting and shaming these woke companies that embrace the idea that America is a racist country with centuries of systemic racism for which to atone.  That’s a ridiculous claim, but if they want to make it, I say, you first.

Disney is damaged, no matter what it does now.

Agreed. It’s been too woke for too long, and normal Americas are sick of it. I want Disney to provide all of its venues, hotels, resorts, parks to POC for free. Until it does so, it’s just a lying, virtue signalling POS.

Besides, I feel that they have insulted and demeaned the people with mental health. I mean Bugs Bunny was called Bugs because insane asylums had unfortunate people who had chemical dependencies and were subject to d.t.s Such dopamine storms result when you suddenly remove chemicals that mimic gaba in the brain. This is most insensitive and I think all us lushes should sue for reparations. So there.

Lushes of the world unite! I’m down with that. 😛

I resemble these insinuations.

…that’s not where the name “Bugs” Bunny came from and Bugs isn’t a Disney character.

Seriously, what the f–.

“Let’s get out in front of this so we look woke.
Hire a b.s. diversity director and let them put some program together.”

It’s why I will likely never watch the red sox or the bruins again.

I hear ya, I miss the Red Sox, but you know what? I can live my whole life without watching another game by an org that literally hates and seeks to destroy me and my ideological kin. They can rot in all levels of hell for all I care about woke sports at this point.

Their Pixie Dust has always been died up pulverized dung.

Disney™ has been damaged since the day they put racial stereotype warnings on The Muppets on their streaming service. After that I knew they were hopelessly woke and beyond hope. This whole CRT thing is just an extension of that.

They are just going to reword it.
The woke love to play semantic word games semantic.
They know the media will defend them if they follow the approved semantics.

Consumer service companies are very vulnerable to extortion by the race-baiters. They care so much about their public image that they will do anything to appease the mob.

The “mob” they are appeasing is teensy tiny portion of the woke Twitterati but very loud. We need to show that the “mob” on our side is not only vastly larger but just as committed to destroying the leftist woke BS. Speak up, demand they provide their products, venues, and services to POC for free. Do that, and this ends. Now.

I can imagine Disney and other companies trying to push their CR training out of public view somehow, getting their employees and CRT vendors to sign NDAs. Or some other disguising effort…

An NDA won’t stop–never has stopped–leaks. That’s why they are leaks and not on the record acounts.

They will simply stop using them and find other proxies. Have you donated to BurnLootMurder, comrade? FEC / IRS says no.

Same thing they did when IQ tests were declared raaaaacist.

This is an opportunity to ask

We know Disney is lying when it says it is walking back it’s race stuff it’s race narrative is something the senior management very clearly believe in.

My question is how we get out of the point of zero cultural influence?

Dude, NO senior manager in any major company anywhere actually believes this racist crap. Do you honestly think that the rich are sending their kids to schools to learn they are racist filth simply by being born white?

We need to kill this racist evil now. While we still have a voice.

We need to kill this racist evil now. While we still have a voice.

And before it goes to the next level in commerce – demands from large corporations that their suppliers adopt their policies as a precondition of doing business with them.

That will further entrench both toxic CRT, and the cottage industry of conslutants that push it.

I work at a company where at least one senior manager really seems to believe it.

But I do think the vast majority of execs go along with it either because they aren’t fully aware of what they are signing off on or they are afraid of being called out too.

Businesses follow trends, so if other companies are instituting crt-based trainings then they better too. But if companies start dropping these trainings like a hot potato, then others will follow that trend as well. Especially a company as large and influential as Disney.

I wouldn’t be so sure it is pandering. Over the years Get Woke Go Broke has happened often enough that it is today a cliché thanks to how many times it happened.

The reaction in the corporate world wasn’t to knock it off the reaction was they learned to all work together going woke at the same time to prevent us from taking our money away from them.

All of these executives are from the college cultures that could charitably be called racially obsessive to.

The problem is true believers or not the big corporations all putting their weight behind CRT greatly increases prominence of CRT.

I agree we all need to speak up by the way, I’m just not sure how to do it effectively.

So they’ll present the same toxic crap in a way that doesn’t involve using their intranet. Progress, I suppose.

I saw something truly awful yesterday while shopping. Some woman in a pullover with these words on the front: