Wenyuan Wu: “A cheap reboot in the woke camp is to dissociate their ground efforts from CRT. This unsolicited reaction is a non-denial denial and a demonstration of our effectiveness.”

The term “Critical Race Theory” is becoming toxic. Widespread publicity of race-shaming and neo-racist activism on campuses, public and private K-12, government, and corporations, has sparked both state-level legislation to keep such instruction out of public schools and grassroots pushback from parents around the country.

The terminology used always has had some variation, as we explained on our CriticalRace.Org website (emphasis added):

Not all of the colleges and universities in this database and map have Critical Race Training. This list allows you to check. For those who do have such Critical Race Training, there are varying degrees of such programming, some mandatory, some not.  For many schools, it’s a continuum of programming, such as “Diversity, Equity, and Inclusion” and “implicit bias” training and programming, that does not easily fit into a Yes/No construct. We provide information from which you can assess the developments.

Yet the use of different terminology seems to be getting more prominent. I’ve noticed, but haven’t yet cataloged, how CRT proponents are running away from the term. A good example that just came to my attention is a report provided to the Eanes ISD school district in Austin, Texas, Eanes ISD Diversity Equity and Inclusion Update, May 11, 2021.

That report is typical of how survey data gathered by school consultants is being used to push CRT at the school district level. What jumped out at me was this section running away from the term CRT and trying to claim that CRT is merely academic having nothing to do with “Diversity, Equity, and Inclusion” school training (emphasis added):

o Critical Race Theory (CRT) is not diversity, equity and inclusion (DEI) “training” but a theoretical approach typically used by scholars to interpret happenings in society through scholarly engagement.
o That process, which originated in the legal academy, involves interrogating race and racism in society and it has spread to other fields of scholarship. While our DEi training addresses race and racism, it is not CRT that is commonly used in the academy.
o The focus of our DEi training is to develop racial awareness as an initial step to deepening understanding of equity and how it can be used to improve access and increase belongingness of all students. 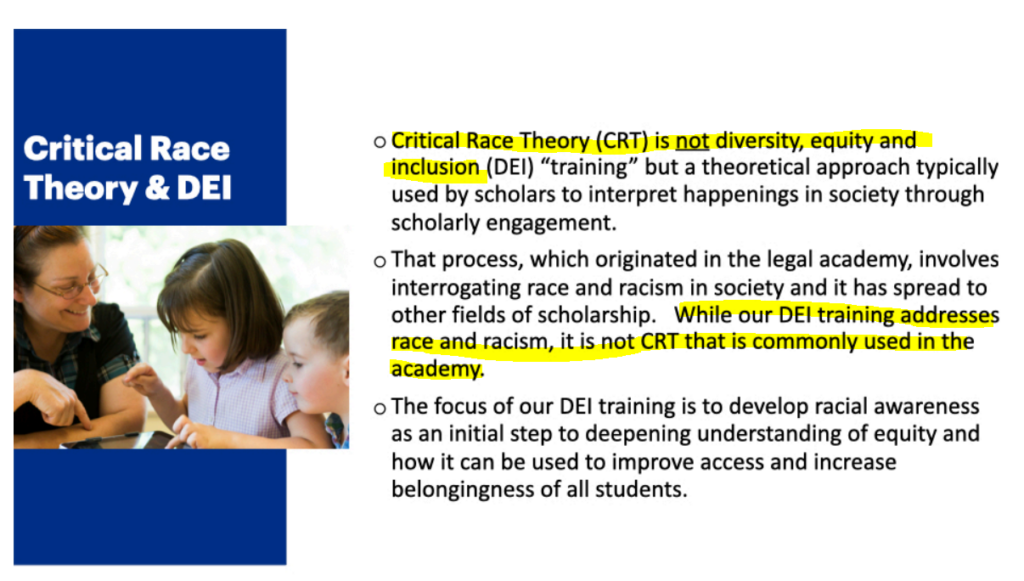 The claim that CRT is merely academic is why at our CriticalRace.Org website we title the website “Critical Race Training In Education.” How Critical Race Theory is implemented is the key to the problem, and that problem does not disappear by drawing an academic/non-academic distinction.

This recently released survey from Parents Defending Education shows that a clear majority do not want CRT taught under the rubric of Diversity, Equity, and Inclusion:

Wenyuan Wu of Californians for Equal Rights is on top of the emerging linguistic deception, tweeting:

A cheap reboot in the woke camp is to dissociate their ground efforts from CRT. This unsolicited reaction is a non-denial denial and a demonstration of our effectiveness.

Wenyuan attached to the tweet this handy guide on How to Spot CRT? Codenames and Keywords: 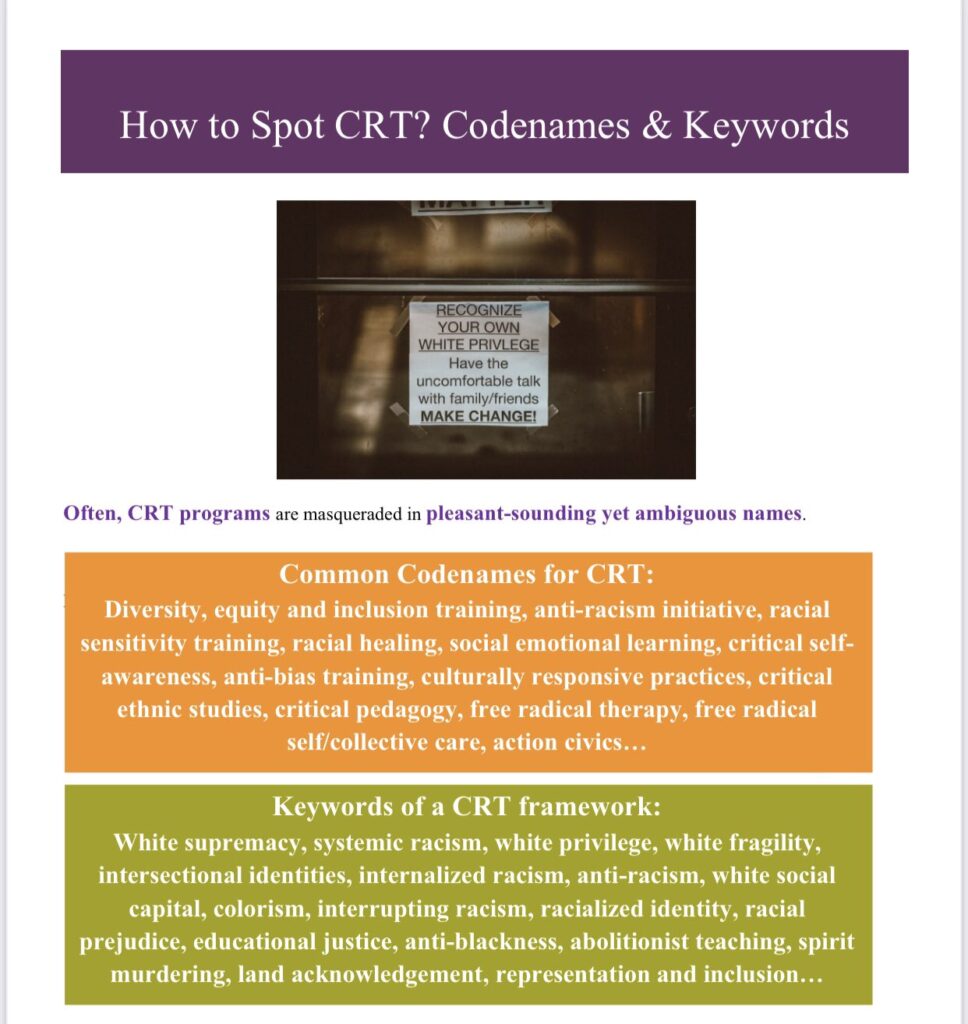 This guide highlights that while the verbiage may vary, what does not vary is the obssessive focus on race as the key to almost everything, with race-shaming, racial identity politics, racial stereotypes, and racial demonization the driving force.

When they have to get sneaky about it – you know (and they know) it’s indoctrination.

Hillsdale has a great beginner’s guide to understanding CRT. I found it very informative:

The same thing was done to the Whole Language approach to “teaching” reading. All sorts of names were used, Sight-Say, See-Say, Look-Say, Balanced Literacy, and others.

All of it was disateous in teaching children how to read. Our language – 26 letters; 44 sounds – must be taught using intensive, systemic phonics. It works every time.

So when did WL ever get its start? In the 1930s when Democrats wanted to develop a stupid population so that they, the Ds led by the wonderful FDR, would have government be the end-all. Their lust for power continues right to this moment.

The absurd way math is being taught today appears specifically intended to make it as difficult to understand as possible.

I want competence not skin color. What does Joe Biden’s systemic racism (1994 Crime Bill among others) and other such laws have to do with defund the police?

That was supposed to be a regular comment versus a reply, but it still works.

The neo-Marxists fascists are always changing the traditional definition of words. And making up new phrases and slogans. If you object you are a despicable deplorable dangerous hater who must be silenced.

Whatever it takes to indoctrinate the proles and acquire total power over everyone. For The Cause.

Consolidating capital and control is a secular ambition of past, present, and progressive causes and the first-order forcing of [catastrophic] [anthropogenic] violation of human and civil rights. Wicked. In Stork They Trust

And abandoning terms once they have sullied them beyond redemption. This is why sex workers aren’t prostitutes, progressives aren’t socialists, people of color are not colored people, accountability culture is not cancel culture, and equity is not discrimination.

Exactly it’s putting lipstick on a pig, just more dangerous and uglier. An earlier example is global warming, now dressed up as climate change; call it what you will, it almost always is a baseless, foolish, and outright ignorant justification for failing to fix real problems. And a livelihood for frauds and fools.

It’s important that we don’t let the rancid left change our speech patterns.

In truth the most racist people on Planet Earth shout “racist”at everyone else.
If we allow them to change our language by dignifying their lies, they’ll get away with this horse puckey!

This would be why the bills that passed state legislatures ban the substance not the term.

The problem is not white privilege. The probem is not racism. The problem is systemic brain washing of black people to make them believe that everything that happens to them all day long, seven days a week, is racism. They have been told that all their lives and they believe it’s true. As a result, that is all they see, all they think, and all they talk about. Thus they act & react as if everyone is racist.

In a recent interview Michelle Obama said she’s worried about her daughters as they get out on their own that they will experience racism and white people will not see them for who they are but only the color of their skin. If you can go all the way to the top, be the president of the US (the highest & most influential position in the world) for eight years and then afterwards you and your wife still feel white people are racist there is no hope for this country.

She has reason to be concerned. Why would a company want to hire a potential problem that’s going to bring drama, cries of racism, shrieks of discrimination and a massive sense of entitlement into their organization? And who is going to pay? The millions of Black people that just want to live their damned lives and not be used as a tool or a prop.

The left never gives up. Changing the language in order to fool the rubes is one of their standard tools. Thus “Global Warming” has become (after several iterations) “Climate Emergency”)

In the case of CRT, they are not just running away from a term that doesn’t sell well. They are attempting to evade the growing number of laws against teaching this stuff.

Education “experts” will sit in front of state legislatures, or the U.S. Congress and tell the lie that CRT means something entirely different than the term they are using this week. Then they’ll go back to school and keep trying to force people to hate each other.

Heh. I think I mentioned this exact thing somewhere a couple of days ago, concerning various legislatures “banning” CRT.

CRT is Shaming not Training.

What does systemic racism, like Biden’s 1994 Crime Bill have to do with defund the police?

Off topic, first time poster, can anyone help me sort what Ted Cruz is saying about the dems new For the people Act? How are folks automatically registered to vote? The language is confusing. Honestly looking for a big brain assist. Thanks in advance if anyone is here.