Our education systems are in turmoil from the recent surge of Critical Race Theory teaching in K-12 and higher ed throughout Rhode Island and the nation. CRT, often misleadingly called ‘antiracism’ training, makes race and racial conflict the center of everything, plays races against each other, and frequently engages in race-shaming. We can do better. 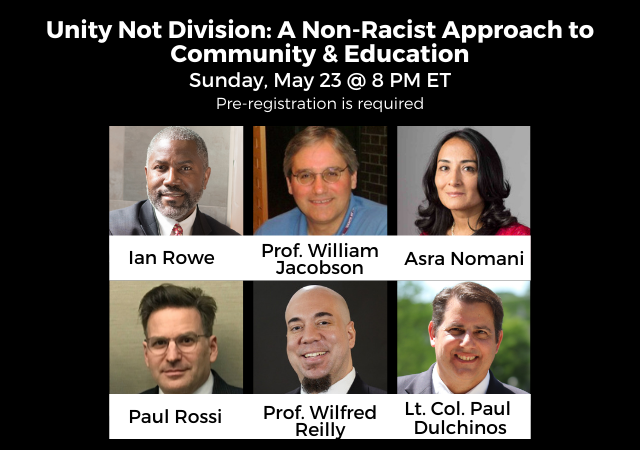 On May 23, 2021, at 8 p.m. Eastern, the Barrington (Rhode Island) United Veterans Council (BUVC), with the financial and logistical support of the Legal Insurrection Foundation, is holding an online webinar pushing back against the surge of Critical Race Theory indoctrination locally and throughout the state, Unity Not Division: A Non-Racist Approach to Community & Education. REGISTER HERE.

The Rhode Island Coalition for Israel (RICI) is an additional sponsor and promoter of the event.

Here is the event description:

Our education systems are in turmoil from the recent surge of Critical Race Theory teaching in K-12 and higher ed throughout Rhode Island and the nation. CRT, often misleadingly called ‘antiracism’ training, makes race and racial conflict the center of everything, plays races against each other, and frequently engages in race-shaming. We can do better. In this program leading educational experts from around the nation will discuss how we can FIGHT RACISM THROUGH EDUCATING CHILDREN CENTERED ON UNITY AND AMERICAN FOUNDATIONAL PRINCIPLES, not racial division.

We have an impressive list of speakers, some of whom may be familiar to you. Professor Wilfred Reilly and Ian Rowe previously appeared at LIF webinars regarding CRT in education. Asra Normani, a former Wall Street Journal reporter who now is part of the leadership at Parents Defending Education, is one of the leaders against the anti-Asian admissions changes at Virginia’s Thomas Jefferson high school. Paul Rossi, who has been all over the news and influential podcasts, was the Grace Church private school math teacher who openly announced that he refused to stand by while the children were indoctrinated. I will be the Moderator, and Lt. Col. Paul Dulchinos of BUVC will give an Introduction. 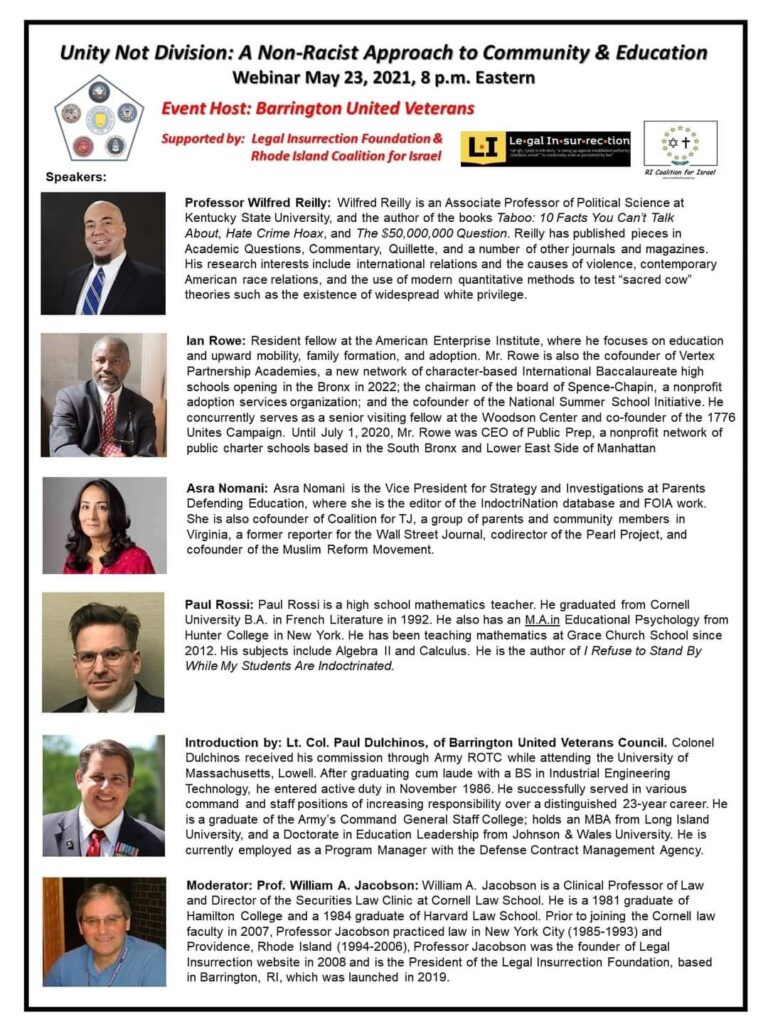 We don’t usually give lengthy background on an event, but this time it’s necessary so you understand this is not just another webinar. This is part of a growing grassroots movement in Rhode Island against the CRT being pushed by governments and schools. That a CRT resistance movement is emerging in solid blue Rhode Island is a sign that opposition to the CRT “antiracist” neo-racist race shaming and politically-induced racial conflict is not a partisan issue — all political sides are coming together to say STOP.

Barrington, where LIF is based, once was a somewhat red island in a blue Rhode Island political sea. But things have changed with an influx of liberal-leaning people from Providence lured by the best public school district in the state (and highly ranked nationally), thus avoiding the cost of private school, and out-of-staters lured by relatively low housing costs (compared to NY/Boston) and a beautiful location between Narragansett Bay and two rivers. Where Barrington once was a Republican-dominated town, it’s now solidly Democrat at the town council level. At the state level things have changed also, with the once working-class “blue dog” style Democrats becoming aggressively progressive. One thing that hasn’t changed is that public sector unions, particularly teachers unions, still run the state.

The somewhat stodgy town once nicknamed “Borington” is now woke as hell at the government and educational levels. And that is the source of conflict, as progressive politics are pushed hard by people with power and megaphones. It’s a microcosm of how institutions are taken over and repurposed.

In late August 2020, the Barrington town manager unilaterally raised the Black Lives Matter flag on the town flag pole outside town hall above a veterans memorial. That led to an outcry of protest from BUVC, which previously had objected to any political movement flags being flown at that location. BUVC, headed by Lt. Col. Paul Dulchinos, led a “Keep Politics Off The Flagpole” campaign to no avail as the town council affirmed the town manager’s decision, voted to fly the BLM flag indefinitely, and rejected BUVC’s request in such case also to fly the “Back The Blue” flag. 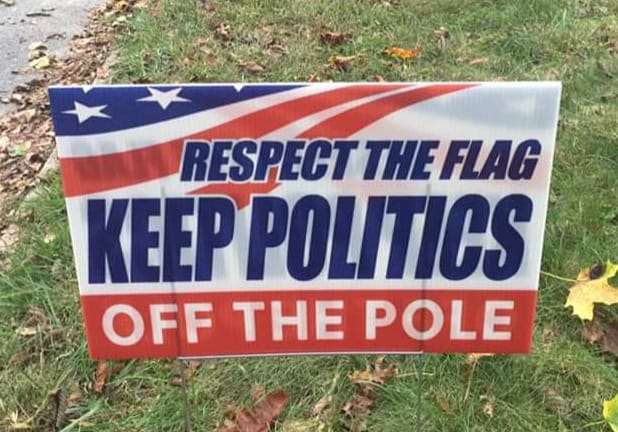 BUVC continued to lead objections to the BLM flag flying on the town flag pole, but the town council, after a highly contentious and well-attended zoom meeting, voted to enact an ordinance giving it sole discretion over which flags to fly, and then minutes later voted again to fly the BLM flag for another month, and possibly again in the future. BUVC then asked to move the veterans memorial so it would not be located under political movement flags, but that request was refused.

As the BLM flag controversy was continuing, it became apparent that at least some teachers in the Barrington school system became actively involved, and got students involved, in fighting a proposal to ban CRT teaching in public schools. Based on comments at public testimony on the bill, it became clear that some opposition from students in Barrington and elsewhere was organized as part of class activities.

The specific precipitating event came recently when the Barrington town council committed the town itself to sponsoring, promoting, and providing logistical support for an April 26 online lecture by Prof. Ibram X. Kendi, the well-known CRT advocate and the person most associated with the CRT variation called “antiracism” training. This wasn’t the town, as a governmental entity, merely permitting or facilitating Kendi, it was a full-blown town production in the town’s name. The Barrington Public Library used its Zoom account for the event, and had 100 copies of Kendi’s book to give away to library visitors. 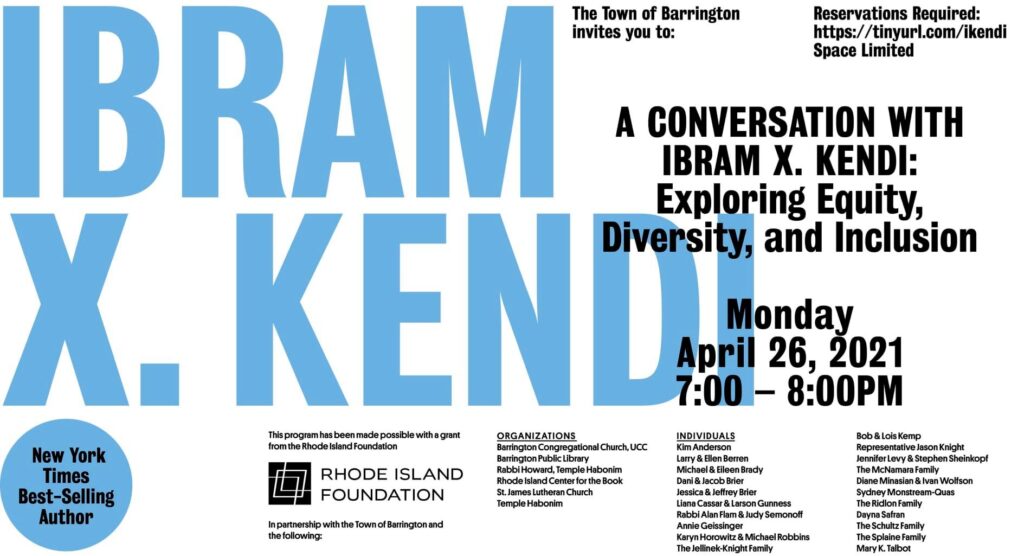 We have written about Kendi’s brand of CRT many times before, and how his term “antiracism” is a misrepresentation of the racial (and some say racist) Kendian ideology. You can read critiques by numerous scholars at LIF’s criticalrace.org website, and how Kendian “antiracism” has spread to K-12. The essence of Kendi’s ideology is to pit people against each other, artificially dividing the world into racists and antiracists, the latter requiring activism to dismantle supposed systemic structures. Anyone who adheres to the traditional American civil right movement principle of judging and treating people equally without regard to race is, in the Kendian forumula, racist. “Present discrimination to remedy past discrimination” is the iconic Kendian formulation.

Based on records obtained by LIF pursuant to a public records request, we learned that Kendi was paid $15,000 for his one-hour “conversation” with Barrington’s outside diversity consultant, paid by the massive Rhode Island Foundation and apparently additional private donors. The zoom meeting provided 600 spots but did not sell out. There reportedly were only about 400 people who attended.

The Kendi event announcement led to BUVC asking LIF’s help in putting together an alternative panel, which we have done. We will use LIF’s Zoom platform and registration system for logistical support.

RICI, which has been attacked by the local liberal Jewish establishment over the BLM flag issue (see RICI’s response here), also is providing valuable promotion and outreach for the event.

BUVC asked the town council to endorse and promote this alternative program on the same basis as it endorsed and promoted the Kendi program, but it has refused to do so.

That’s a long-winded lead up to this event, but you needed to know that background. This is not just another online webinar, it’s a positive step taken by BUVC to provide not just criticism, but an alternative that can be applied throughout Rhode Island and the nation. The webinar is open to all, but you need to preregister.

There is a growing resistance movement among parents in Rhode Island to the CRT indoctrination in K-12 which is just coalescing as it is elsewhere in the country. You will be hearing more about this at Legal Insurrection in the coming weeks and months. This hopefully will be just the first of many events in which LIF can provide support to groups seeking to promote Unity Not Division: A Non-Racist Approach to Community & Education.

Diversity of individuals, minority of one. Novel. Conservative.

This is a great campaign issue for Republicans. We can claim that the Dems are returning to their racist roots. That racism is the foundation of the Democratic Party, founded to keep blacks in chains, kept black inferior with Jim Crow and now they continue their racism with their Critical Race theory. They just can’t help their racist ways.

You posted this again. It is Monday, but this is last Friday’s email.

A good read:
Critical Race Theory: What It Is and How to Fight It
https://imprimis.hillsdale.edu/critical-race-theory-fight/