“Brown also claims it took 45 minutes for police to arrive because it was assigned as a low-priority dispatch.” 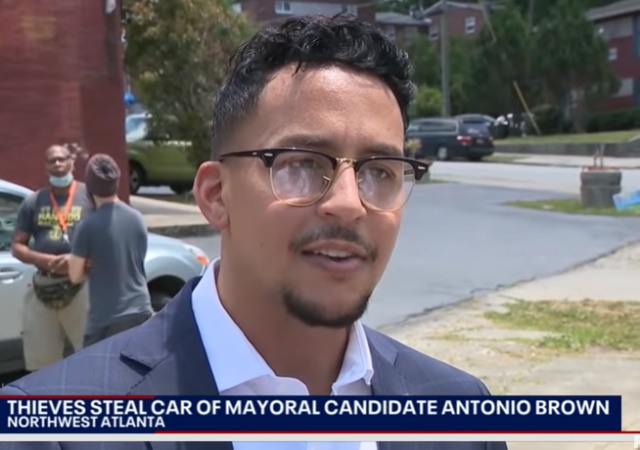 Atlanta Councilman Antonio Brown voted to defund the police. He is now running for mayor.

On Thursday, a group of young children carjacked Brown. He called 911 for the police, and the operator reportedly put him on hold for five minutes. Karma?

A councilman and mayoral candidate in Atlanta who backs the ‘Defund the Police’ movement and voted to cut the police budget by $73 million, was dragged from his car while it was being stolen Wednesday.

Antonio Brown, who is running on a platform of ‘reimagining public safety,’ was the victim of a carjacking months after he voted for an ordinance that would’ve withheld tens of millions of dollars from the police. That ‘Defund the Police’ ordinance – which would’ve reallocated $73 million of the police budget – was rejected by the city council.

Brown was attending a ribbon-cutting in northwest Atlanta when four people hopped into his car as he was getting out to speak to someone just before noon – and took off.

The councilman told WSBTV that he was on hold with 911 for five minutes after the incident. Brown also claims it took 45 minutes for police to arrive because it was assigned as a low-priority dispatch.

Here’s a local news report. Watch to the end and note how Brown tries to make this all about generational poverty.

Debra Heine of American Greatness has more on Brown’s background:

The Democrat was one of seven councilmembers who voted to withhold $73 million from Atlanta’s police department budget until Mayor Keisha Lance Bottoms’ administration came up with a plan to reform the city’s police department. The ordinance failed on a 7-8 vote.

The city councilman has been a vocal critic of police, marching in Black Lives Matter protests last summer in the wake of the death of George Floyd at the hands of police in Minneapolis. “No justice, no peace!” Brown chanted through a bullhorn during a June protest.

Why did Brown call the police after the carjacking? Were there no social workers available?

Sometimes Karma, served with a side dish of irony, is delicious.

“Brown also claims it took 45 minutes for police to arrive because it was assigned as a low-priority dispatch.”

Karma? No, the dispatcher was allowing this fool/tool to call a social worker.

This episode didn’t change his mind. No one like this goofball will ever care, they will sink their claws into stupid even more and try to flush society down the toilet with them.

He didn’t have a mind to change about it. He wants to get into real power to have a private security detail and grift off the system. Then, he can screw up criminal deterrents for the commoners and grab more and more power.

Funniest thing I have seen all day

My first thoughts when I heard about this yesterday were: How on earth could 4 CHILDREN (preteens) overpower an ADULT male, unless that “male” was a little light in the loafers, or transitioning from a 90 lb. female? I’m over 70, and kids that age would find themselves struggling to regain consciousness rather than getting away in my vehicle.

This lgbtq moron should know, as these thieves do, that they will serve no jail time, and they will be heros in the “hood.” Given the stats re crime vs life-span, 3 of the four won’t live to see twenty years. I couldn’t care less. Atlanta democrats, you spawned them, trained them and turned them loose on YOUR citizens. Hope you’re happy.

Maybe the “pre-teens” were armed? And, some of those black kids can be giants at that age.

Well, the story says he’s LGBTQ…… I wonder which initial he really is? How about W for weak?

LoL. 4 children (one allegedly as young as 7 years-old) can over power an adult when the whole thing is a set-up by the adult. And the more drama the better. I’m sure Brown will use this “incident” as just more political fodder why the police should be defunded. Guaranteed.

That dipshit stated that he is not going to press charges. He is also a camera whore. Another strike against him it that he is under federal indictment on fraud that happened a few years back.

“No justice, no peace!” Brown chanted through a bullhorn last June.

That’s after he became a city councilman. He’s been marching and protesting to achieve peace.

Maybe he shoulda grabbed his trusty bullhorn and yelled at those boys who were hijacking his car, “No justice, no peace.”

And then give them a really stern warning, “If you boys don’t bring my car back right now I am going to defund the police!”

I hope the dispatcher knew who he was and did this on purpose, and that a normal person would have got a better response.

I shared this story with my son-in-law who is a LEO and he responded that of course it was made a low priority call. The vehicle was already gone and the victim wasn’t physically hurt. He was lucky they even came. Ha! In California they’d have made you just file a report online!

Nah. If she had done it on purpose, she would have dispatched a social worker.

“I understand some children stole your car, Councilman. How does that make you feel?”

as the late Janis Joplin sang

Oh Lord, won’t you jack me a Mercedes Benz
My bros all drive Porsches, I must make amends

They don’t have bills to pay.

And this dumbass wealth distributionist is driving a Mercedes Benz. This story couldn’t get more idiotic and he couldn’t look more like a hypocrite, whining about response times.

As an aside- three cops in Tacoma wa are being charged with Murder for the murder of a George Floyd clone. Heart condition, high on meth, excited delierium and then died with the spit hood on.

And the standup comedians in Hotlanta have more material.
.

He claims the problem is poverty caused by wealthy people, like the ones who drive Mercedes-Benz cars.

Poor kids take his car. Why doesn’t he just consider that wealth redistribution ? Fulfillment of his agenda. SO, WHY DOES HE WANT THE LUXURY CAR BACK?

Not such a great idea now, is it, Einstein?

An ounce of prevention is worth a pound of cure. Especially in a big city. This guy leaves his luxury car unlocked, so children as young as 7 can steal it. He’s definitely not smarter than a 5th grader.

By vowing not to press charges, he has invited local criminals of all ages to take home their next car from his driveway or parking spot.

And he communicates to the criminals and hopefully the good people of Atlanta what they can expect if they vote him in as mayor.