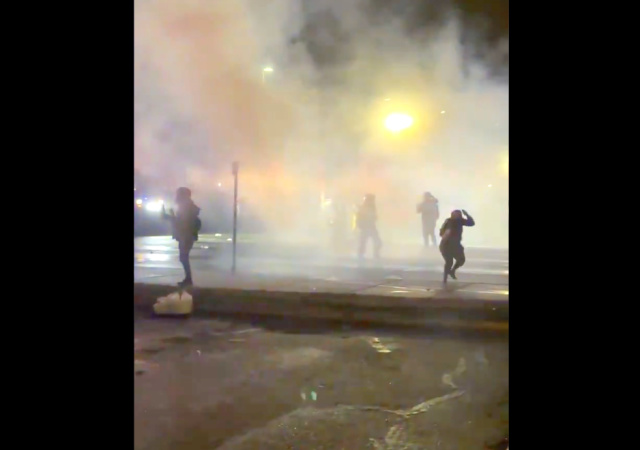 Brooklyn Center, Minnesota, witnessed the third night of riots and violence after the death of Daunte Wright.

The National Guard arrived at the Brooklyn Center Police Department as the sun went down. It did not take long for demonstrators to show up.

Night 3 in Brooklyn Center, MN has started as demonstrators are showing up every minute. pic.twitter.com/NVAeVK2z2c

Demonstrators shout: “I don’t know what I’ve been told! These cops are some b*itch ass hoes!” pic.twitter.com/Io6RnFEoD9

Antifa joins the riots and violence. From Fox News:

Tobin, who was relocating to another part of the town at the time, spoke to Ingraham from inside a vehicle.

“I can tell you this. The makeup of the population out here certainly changed tonight. I think Sunday night it was all about the locals that were here: They were genuine and angry,” he said.

“As it goes on, you get more people coming in from out of town. I had several people that I spoke with who identified themselves as Antifa — and angrily so. So you had that crowd out here.”

“We saw an increased number of kids ‘wearing the uniform’ if you will, the black hoodies, the backpacks. I saw leaf-blowers out there, different kinds of … makeshift shields and things. It was changing dramatically in terms of the makeup, and certainly the numbers of the crowd.”

"We have seen some Antifa flags. We have seen a mix of Black Lives Matter activists as well."@VenturaReport appeared on @IngrahamAngle live from the unrest in Brooklyn Center, Minnesota. pic.twitter.com/OJ10tyEB7L

"This scene has been chaotic tonight."

Watch @LisaBennatan's segment with @ShannonBream talking about the ongoing unrest in Brooklyn Center this evening. pic.twitter.com/qWtgmxEJqK

It also did not take the police long to declare an unlawful assembly.

Just arrived on the scene at the police station in Brooklyn Center and an unlawful assembly has already been declared pic.twitter.com/F2M6rv4wWn

Crowd using small wooden shields and umbrellas to form a line in front of the fence pic.twitter.com/Ulb8ttLY6B

Fireworks go off amidst plenty of tear gas and flashbangs pic.twitter.com/uIDwQlKnV4

Kim Hyatt, a reporter with Star Tribune said the police told the media to leave.

They’re making arrests and physically grabbing press and telling us to leave. pic.twitter.com/t4IT3B9ilN

I don’t believe the shooting was an accident. I think if they interview her family, friends and coworkers and bread-crumb them with questions like “did she express stress about her job?” “Did she have opinions about other incidents in the news?” they will find that in an unguarded moment she told someone what she would do with a resistant suspect, up to and including “mistaking” her service firearm for her taser.

The unspoken tragedy is the phase-lock loop we’re in here; this incident supports the ACAB narrative and combined with the encouragement to resist police by cynical profiteers who buy mansions and hookers with donations, these incidents are just gonna perpetually self-actualize and the country will burn.

Disagree. I’ve seen no reports implying she would intentionally shoot a resisting suspect. Her reported level of professionalism and discipline would suggest the opposite. Let’s not get into conspiracy theories.
.

Point taken. I was engaging in unfounded speculation but I prefaced it with “I think…”

The point I really wanted to make was how these things are causing an out-of-control feedback loop. In any endeavor, the human part is the weakest link. Business, politics (to a higher degree)….whatever. It sounds callous, but it is what it is.

There are at least 18 cases on record of police grabbing a gun instead of a laser. Under stress, weird things happen. Based upon the video, I believe it was accidental.

Your comments caught my attention as you used a term (phase-lock loop) I have more than a passing awareness of. The accurate term is “phase-locked loop” and as the name implies, unless there is an external change affected to the control parameters (one of the phases being shifted in relation to the other(s), for example), it will remain in a static state indefinitely.

On the other hand, an “out-of-control feedback loop” is a diametric opposite of that. It, by definition, will remain dynamic unless a stabilizing external input is applied. Think a nuclear bomb.

To your point – I concur that what is happening within the agitator class is certainly more of the dynamic rather than static variety, though based on the currently available information I also believe that her actions that contributed to the death of the suspect specifically were not intended to cause that result.

Generally, there are three types of errors: Worldview/misunderstanding, a slip (trying to do what is right but unintentionally doing something wrong), and a deliberate wrongful act. As the former BC City Manager advocated, due process will provide information about reality. Currently, the narrative is providing noise (not information) because this is not about race. Antifa has its roots in 1930’s Germany. This is war. They are exploiting a bad event to move an agenda that has nothing to do with race other than using it as a tool.

You say, “I can’t say what was in her heart” and yet without a shred of evidence proceed to do that exact thing.

It was an accident. There are other instances of police grabbing their gun instead of a taser while under stress. It’s a known thing and in training you’re taught about it.

She’s going to have to pay for what she did. No doubt about it. Other officers have gone to prison for doing the same thing. However, to claim that in this current political climate where cop hate is all the rage that she, a trainer herself and president of the local police union, would intentionally in front of multiple body cameras say, “taser, taser, taser” and than pull and shoot her Glock in order to kill someone makes me question how you can call yourself after John Galt.

I apologize to anyone I offended with my prejudicial monday morning quarterbacking. Suffice to say, aside from fire arms safety courses, I have zero real-world experience in anything close to this. So I will refrain from replying about that aspect. I appreciate the informed discourse.

If mcas scores go down, it would be irrational to abolish public schools. Defunding isn’t the answer. Better comprehensive training and counseling maybe, I just hate to see these things happen.

“If mcas scores go down, it would be irrational to abolish public schools.”

No it would be irrational to continue to patronize them if one had any choice at all. When they are starved enough, abolishing them becomes very rational.

Do you think she wanted to be fired, and charged with manslaughter? Why dismiss the possibility, in fact, near certainty, that she mistook her Glock for a taser in the heat of the moment?

Wonder if we could start a Gofundme for some professional-grade paintball guns and UV dye pepper-paintballs for the beleaguered officers. That would allow them to mark violent rioters for future identification, both with glowing blue indelible dye on their outfits and black-and-blue marks under it.

I have opined similarly since the riots of the sainted Gentle Giant. I suppose there is a reason it hasn’t been implemented but it sure seems like it would be a good idea to help identify those who choose to blend in to commit their crimes.

I really have a strong, base desire to see “antifa” slaughtered. I can’t deny it. I would cheer on and react with utter joy if the Guard opened fire on “antifa” with live rounds and killed them by the score. I truly, honestly want that crowd dead.

Accidents do happen in life.

This accident was tragic, fatal and preventable. And she almost certainly will pay heavily for it.

To suggest this wasn’t an accident is an unnecessary and dangerous stretch.

Discerning motive requires knowledge. The risk of relying on inference lies with present and progressive action. That said, either way, in the aftermath, due process should lead.

I don’t know of another place where I could make an emotional point and get thoughtful negative feedback without personal attack.

It’s gonna suck when they come for this site.

Occupy through occupation and actual insurrections.

Not to make light of the events in Minnesota but just how ‘nice’ is ‘Minnesota Nice’?

Antifa/anarchist/BLM mobs are gaining effective control of the streets. When is enough actually enough? When does Minnesota arrest, charge and prosecute members of a violent mob?

The political leadership of Minnesota choosing to concede to the mob v mass arrest is baffling. The NG has the numbers to allow for effective cordon. Wade into the crowd and arrest members of the unlawful assembly. Run their prints, ID outstanding warrants, repeat offenders who were released on promises to not engage in a mob, probation and parole violators.

Hand over out of State offenders to the Feds. Make the Biden Admin be a part of it or yell from the rooftop if the DoJ refuses to act.

“When does Minnesota arrest, charge and prosecute members of a violent mob?”

When Minnesota is again governed by adults. Which, in the current climate of GMO voting and election fraud, means never, or only after the streets have been glassed.

“I can’t believe the news today
Oh, I can’t close my eyes and make it go away” U2 song

Brooklyn Center, Minnesota is a mess. Antifa and the meida narrative will not aid to clean it up. Solutions such as from commenter CommoChief comes across reasonable. Is reasonableness a solution from either the media or Antifa? Politicians are going to politic. Commenter John Galt observses a feed back loop occurring. I think so too. Eric Holder’s Justice Department conflated certain types of crimes to gain control of police departments and such. Later on, others piled on to creat a narritive to sell eyeballs and itchy ears, and to move culture/tribes toward what? Woke justice? That is broke. Real jutice, delayed, doesn’t rhyme with rage.

Philosophies of cultures/ tribes can be found in song lyrics. I wonder what songs antifa members and Brooklyn Center residents listen to. I may hop over to Dollar Street (https://www.gapminder.org/dollar-street?topic=toys&min=14&max=10111) to find out. Will grace and forgiveness be found? Is it of blood of a different color?

I like to read LI & LI commenters such as John Galt, CommoChief and even Millhouse. Keep commenting so I can see though anothers lens of the world.

Let the patriots rise and the culling of commies begin.