“Any reporter on CNN — what they’re actually doing is they’re telling the person what to say… It’s always like leading them in a direction before they even open their mouths.” 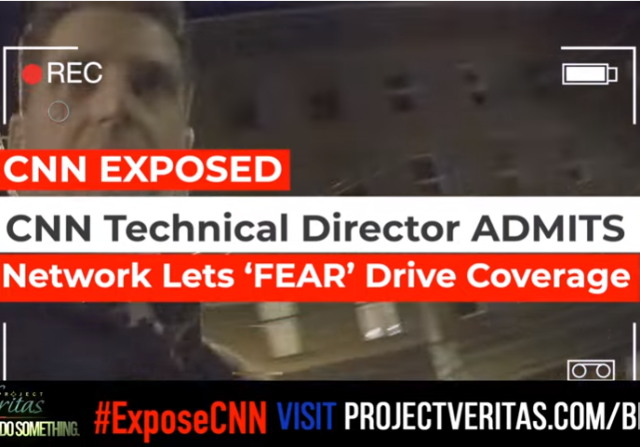 Earlier this week, we highlighted a new video sting by Project Veritas that focused on how obsessed CNN was with removing Trump from office.

In a new video, Veritas shows how the network practices manipulation to drive a preferred narrative and how they used fear of COVID to drive ratings.

PART 2: CNN Director Charlie Chester Reveals How Network Practices ‘Manipulation’ to ‘Change the World’: ‘There’s an Art to Manipulation… Inflection, Saying Things Twice … It’s Always Like Leading Them in a Direction Before They Even Open Their Mouths’

“Any reporter on CNN — what they’re actually doing is they’re telling the person what to say… It’s always like leading them in a direction before they even open their mouths. The only people that we [CNN] will let on the air, for the most part, are people that have a proven track record of taking the bait,” Chester explained.

“I think there’s an art to manipulation…Inflection, saying things twice — there’s little subtleties to how to manipulate people…I mean, it’s enough to change the world, you know?”

“Like, why isn’t it high enough, you know, today? Like it would make our point better if it was higher. And I’m like, what am I f***ing rallying for? That’s a problem that we’re doing that.”

Chester also described how CNN has used the COVID-19 pandemic to keep viewers hooked on the screen.

“If the agenda say, is to like get, like Matt Gaetz right now, he’s like this Republican,” Chester said. “He’s a problem for the Democratic Party because he’s so conservative and he can cause a lot of hiccups in passing of laws and what not.”

“So, it would be great for the Democratic Party to get him out. So, we’re going to keep running those stories to keep hurting him and make it so that it can’t be buried and like just settled outside of court and just like, you know, if we keep pushing that, it’s helping us,” he added. “That’s propaganda because it’s helping us in some way.”

Watch the videos below:

It’s almost like that ‘enemy of the people’ nickname was well deserved.

Trump was far too kind to @cnn. https://t.co/Xpgf5o5JVP

Nothing like "the most trusted name in news" CNN wanting more people to die to improve their ratings. Screw you, @cnn. And piss off while you're at it. https://t.co/Vh4iT3bZGS

Dissident outlets have been censored, shut down and shadow banned by big tech for far less than this. Absolute injustice.

CNN has lost its last measly shred of credibility.

Project Veritas caught CNN RED HANDED hoping people would die of coronavirus so their ratings would go up.

This is what they think of the American peoplehttps://t.co/ucVujwv3sB

CNN is not a news network. It’s a super PAC for Democrats.

CCN lie? Surely you jest. There’s no way they could be fake news. Or have a blatant political agenda. /s

The news has always been an organizer of anxieties. Then they run segments on how to live with it. They always and everywhere claim to know what’s important.

“The whole aim of practical politics is to keep the populace alarmed — and hence clamorous to be led to safety — by menacing it with an endless series of hobgoblins, all of them imaginary.”
H.L. Mencken

CNN, the most trusted name in propaganda.

The moral of this story is if you’re an elected official – but particularly if you’re a conservative Republican – you need to pay close attention to the people you choose to social with.

And we know the “known close associate” is actually guilty – how, exactly? The last few years have made one undeniable fact painfully clear: the Justice Department (and most of Federal law enforcement) is an open sewer of corruption, partisanship, and favoritism.

Is it really possible – let alone plausible – that the same cabal which invented the Russia hoax, targeted General Flynn in a politically motivated prosecution, illegally spied on the Trump campaign, covered up the deliberate slaughters at Waco and Ruby Ridge, and ignored the open terrorism of BLM and Antifa – is now suddenly and miraculously telling the truth in this case? Surely a bit of skepticism is warranted!

There’s no question Joel Greenburg and Matt Gaetz were close friends who socialized and traveled together, frequently over the last several years. That’s not a ‘deep state’ fabrication or a wild yarn spun by the liberal media. There is ample evidence in the public domain that Gaetz and Greenburg spent a lot of time together. And yes, in politics who you choose to spend time with matters. Greenburg is a hot-mess, a poster child for public corruption. Now that’s it’s blown up into 33 indictments, no one – including Gaetz – can be surprised it’s causing him problems. Lay down with dogs, wake up with fleas.

I can’t believe Gaetz would be stupid enough to travel with companions who haven’t reached the age of majority much less paid for sex from under-age girls. I hope it’s not true. But, a 30-something US Representative dating an 18-year old girl is not indicative of someone who’s making the best life decisions. And, that’s Gaetz’ defense: She wasn’t 17, she was 18.

What ACTUAL evidence is there of wrongdoing by the accused? Anything the Feds may say or do must be balanced against the well-documented malfeasance, incompetence and partisanship of the DoJ and the FBI.

Common sense dictates that given the Fed’s sordid behavior in the past indictments should be viewed with suspicion – especially when it is coupled with this “Gaetz is guilty by association” angle that is being pushed.

Funny how “guilt by association” is never pushed by the media when it comes to people with the last names of “Obama”, “Clinton”, or “Biden.”

The ‘ACTUAL evidence’ is there is someone under indictment for sex trafficking who’s a known associate of Gaetz and who is, according to his own lawyer, a cooperating witness in the investigation into Gaetz.

What’s Gaetz’ defense of all this? Well, it’s not: I’ve never met Joel Greenburg and I haven’t socialized with, much less slept with a teenager since I myself was a teenager. He didn’t say that. Instead, he said: Hey man, I’m positive she was 18.

I hope that positivity is warranted.

There’s no question Joel Greenburg and Matt Gaetz were close friends who socialized and traveled together, frequently over the last several years.

“And a lie, Mr. Mulder, is most convincingly hidden between two truths.”
Deep Throat, The X Files

Wow. The only thing that might be worse is if you had a family member like that, instead of a close friend.

Like if you had a husband who occasionally liked to rape women he worked with. Or a crack-smoking son who buys illegal guns and commits incest with other members of your family.

Then your political career would be totally irredeemable and would never go anywhere.

Hyped for ratings. Right. That’s the more benign explanation for their propaganda. The explanation beta-male GOPe soy boys would accept.

The not so benign explanation is they wanted to help get Comrade Biden elected, in any and every way they could. Such as by supporting unconstitutional changes to voting laws in swing states.

CNN is not a news network. It’s a super PAC for Democrats.

CNN is just the tip of the iceberg of corporations functioning as super PACs for the Dems.

Unfortunately CNN is Joe Biden’s main source of information, which is why he says so many things that are demonstrably untrue.

Anybody who has wasted a couple of minutes watching a “reporter” interview a sports figure knows that every question is framed to elicit a specific response.