Get ready for non-stop climate change coverage at CNN once COVID burns out. The CNN director said it himself: “Fear sells.” 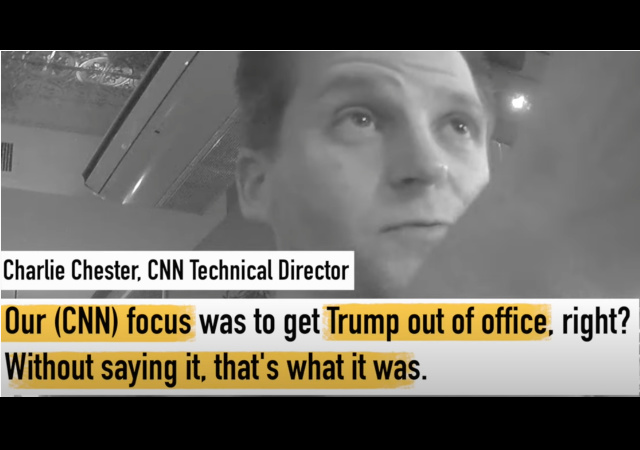 CNN Technical Director Charlie Chester admitted his network did everything it could to vote out President Donald Trump and help now-President Joe Biden win in November 2020.

The video speaks for itself because Chester does not hold back. He spills the secrets that everyone already knows: CNN wanted Trump out of office and fear sells.

Chester told the undercover journalist his role of technical director puts him “one step down from director.”

He appears to have in-depth knowledge of the background talk at CNN like why the network chooses which stories to run and its next big target.

Chester even admitted CNN put out propaganda when it came to Trump. But it does not bother him because he wanted to be a part of the mission to oust the president:

During a conversation with a Veritas journalist, Chester boasted about the impact the network had in determining the outcome of the presidential race last year.

“Look what we did, we [CNN] got Trump out. I am 100% going to say it, and I 100% believe that if it wasn’t for CNN, I don’t know that Trump would have got voted out…I came to CNN because I wanted to be a part of that,” Chester revealed.

Chester explained to the Veritas journalist how CNN engaged in “propaganda” when covering Trump’s health compared to Biden’s health.

“[Trump’s] hand was shaking or whatever, I think. We brought in so many medical people to tell a story that was all speculation — that he was neurologically damaged, and he was losing it. He’s unfit to — you know, whatever. We were creating a story there that we didn’t know anything about. That’s what — I think that’s propaganda,” Chester said. 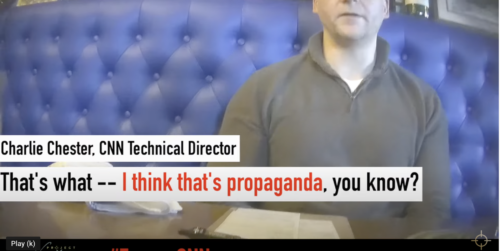 The next portion centered around Biden’s health:

Veritas Journalist: “I guess I have a confession. I worry about Biden and his health, I guess.”

Veritas Journalist: “What? No, I said Biden, our president.”

Veritas Journalist: “I want to take care of him and make sure he’s okay.”

Chester: “He is definitely — the whole thing of him running during the entire — like run for the campaign. Showing him jogging is obviously deflection of his age and they’re [CNN] trying to make it like, ‘Oh, I’m healthy.’”

Veritas Journalist: “Is that what we did? I don’t know. Like what do you mean?”

Chester: “We would always show shots of him [Biden] jogging and that [he’s] healthy, you know, and him in aviator shades. Like you paint him as a young geriatric.” 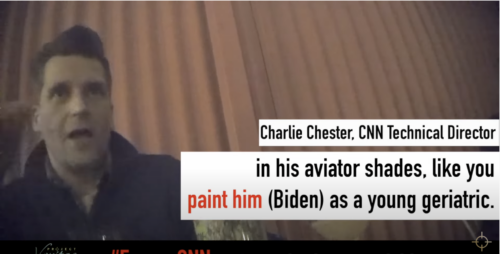 Prepare yourselves for non-stop climate change doom and gloom stories. Chester makes it seem like CNN knows COVID freakout will come soon. What’s a topic that can stick around longer? Climate change:

“I think there’s a COVID fatigue. So, like whenever a new story comes up, they’re [CNN’s] going to latch onto it. They’ve already announced in our office that once the public is — will be open to it — we’re going to start focusing mainly on climate,” Chester said.

Chester: “It’s going to be our [CNN’s] focus. Like our focus was to get Trump out of office, right? Without saying it, that’s what it was, right? So, our next thing is going to be climate change awareness.”

Chester: “I don’t know. I’m not sure. I have a feeling that it’s going to be like, constantly showing videos of decline in ice, and weather warming up, and like the effects it’s having on the economy–”

Veritas Journalist: “Who decides that?”

Chester: “Head of the network.”

Veritas Journalist: “Who is that? Is that [Jeff] Zucker?”

Chester: “Zucker, yeah. I imagine that he’s got his council and they’ve all like, discussed, like where they think–”

Chester: “Pandemic-like story that we’ll beat to death, but that one’s got longevity. You know what I mean? Like there’s a definitive ending to the pandemic. It’ll taper off to a point that it’s not a problem anymore. Climate change can take years, so they’ll [CNN will] probably be able to milk that quite a bit.”

Chester: “Be prepared, it’s coming. Climate change is going to be the next COVID thing for CNN.”

Veritas Journalist: “You think it’s going to be just like — a lot of like, fear for the climate?” 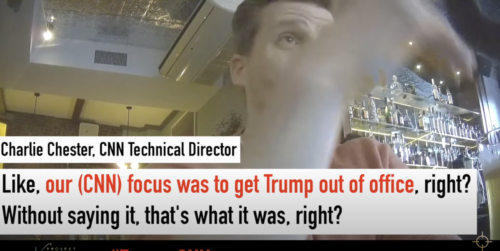 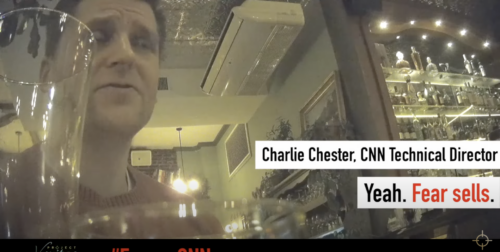 This is just great because the libs can try to write off Veritas all they want, but they will have to go into their stubborn little boxes of triggering to deny climate propaganda when CNN actually goes ahead and does this for the next 3 years or beyond.

And yet every time Veritas catches somebody important in a bald-faced lie, only Veritas is prosecuted.

Yeah, more not news I can safely ignore because it isn’t true. Great job CNN, please tell me more about the shortcomings at Fox you keep peddling…….

I have some questions:

1. Why is this not a giant “in kind” contribution by CNN/Warner to the Biden Campaign?
2. Shouldn’t this be referred to the FEC?
3. Shouldn’t Zucker and the guiding minds at CNN (and Warner?) get the Dinesh D’Sousa treatment?
4. What is the distinction between the D’Sousa case and this…apart from Party?
5. In the end, for the purposes of corruption, isn’t it better to be a Democrat?

The answer to your questions is all the same: Many people seem to have this weird idea that helping get someone elected constitutes a contribution to his campaign. This is completely without any basis in fact.

Helping get someone elected is called “campaigning”, and it’s an absolute constitutional right. It is not and cannot be regulated, by the FEC or anyone else.

The only thing the FEC can and does regulate is contributions, whether in cash or kind, to a candidate’s campaign.

A campaign is not an activity, it’s an entity. It has a bank account, offices, employees and volunteers, inventory, etc. And contributions to it are regulated.

Had CNN done this at the Biden campaign’s request it would have been a contribution. But it didn’t.

Put it this way: If I walk into a candidate’s campaign office and offer to help them, and they give me a route and an armful of literature and ask me to go knock on doors and talk to people about the candidate, and I do so, that is a contribution in kind. I am acting as an agent of the campaign, and donating my time to it. But if I do the exact same thing all on my own then that is not the campaign acting; I’m not its agent, I’m me, doing what I want to do, and the campaign is not involved. And the first amendment protects my right to do that, without any limits or regulations whatsoever.

If they hadn’t delivered fake ballots at 3am on Nov 4th Trump would still be in office.
Oh, they think they are sooo powerful.
haha

We can’t say “voted out” but “out voted” is more accurate given that a Biden vote counted 1.2 times versus 0.6 for a Trump vote in votes counted by Dominion in swing states. The election was a fraud, Trump won!

That’s bullshit. It simply never happened, and every shred of so-called “evidence” you have seen cited for it is a fabrication by crazy people and liars like Sidney Powell.

The fact that every effort to audit the election is being fought tooth and nail calls the lie in your statement. If it was an honest election, there would be no reason to resist such efforts.

Whoever suggested it was an honest election? I certainly didn’t. I simply pointed out that Snapper’s claim is a damned lie, a crazy lie, and I stand by that.

Mill house you have to be an utter idiot or willfully blind to ACTUALLY think there was not widespread shenanigans…..which is it?

I have never said, written, suggested, or indirectly indicated that there were not widespread shenanigans. How dare you accuse me of that? I am neither an idiot nor blind, but you are a damned filthy liar, as you have already long established.

Claims for which you have thus far produced zero evidence (that I’ve seen – I don’t read everything you post). Your defense of what appears to be your employer is touching, but unconvincing, and simply calling people crazy or liars because you disagree with them (or more likely are desperately trying to diminish the impact of their claims) doesn’t get the job done either. Sydney Powell still stands by her claims and their validity will eventually prove out or not. She certainly isn’t crazy and she’s a well known lawyer in the country, so it seems like acting like a crazy Democrat wouldn’t benefit her much personally, much less financially. By the same token, name calling doesn’t give you any credibility against the numerous investigations already published or under way unless you can provide something other than your rants to back up your denials. You’ve employed these same tactics in the past to denigrate other commenters here, along with many whose work has been referenced or quoted here, and the only impact has been to annihilate your own credibility.

Txvet, go **** yourself with a pointy stick. I don’t have to produce any evidence against the insane accusations against Dominion, any more than I would have to if someone were to accuse Schumer of burying three prostitutes in Prospect Park across from his apartment. It’s up to the people making such accusations to produce evidence, which they have conspicuously not done because there isn’t any, and the accusations are plainly nothing but a paranoid fantasy that found its home in the Democrat Party in 2004 and has somehow migrated to supposed Republicans.

Sidney Powell is a grade A nut job. She is not a “well known lawyer”, she is a well known nut job. Nobody respects her. She belongs in a padded cell. And every single one of the claims she’s made about evidence has proven to be a fabrication.

What is her agenda? Well, look at the practical result of her activity. It has had one massive result: It discredited all attempts by normal people to suggest that the election result was suspect. It drew all the attention and all the resources away from any attempt to find evidence for such irregularities as could have been proven. It seriously misled the then-president into thinking he had a much stronger case than he did, and into acting on that false assumption, greatly to his detriment. Objectively she has been a great asset to the Democrat Party. If she weren’t so crazy it would be reasonable to accuse her of being a Democrat plant.

Get a clue. Trump wasn’t voted out and the pedophile-in-chief was not legitimately elected.