As we enter our terrible twos, we are fighting every day, in ways seen and unseen, giving aid and comfort to others standing up to this repressive culture. 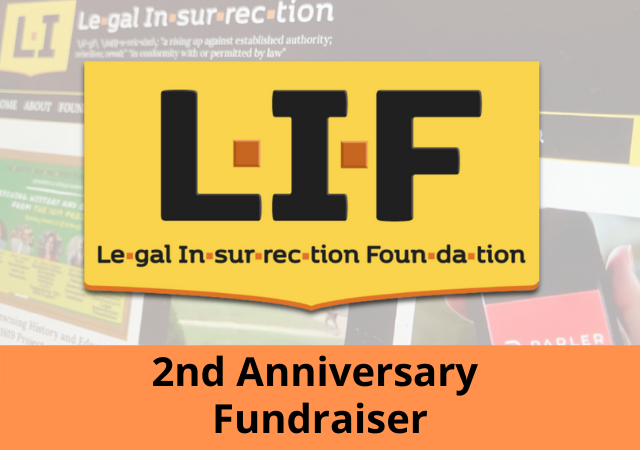 In March 2019, we had a “soft opening” of the Legal Insurrection Foundation, with a more active rollout in April 2019. Since then, it’s been a wild ride, but all for the better. LIF is a tax -exempt educational and research 501(c)(3). You can DONATE HERE.

We are fighting every day, in ways seen and unseen, giving aid and comfort to others standing up to this repressive culture. Your support makes all this possible. Donations are tax-deductible to the full extent allowed by law.

We have grown quite a bit in scope, becoming a leader in fighting cancel culture on and off campus. We also have moved heavily into opposing abusive critical race theory and training. Our new website launched just two months ago, criticalrace.org, received tremendous media and other attention, and now is an important part of LIF.

We also have expanded our team, adding two new people to LIF’s investigative team. You can read about them here: Ilana Cutler, Esq., joined us as Investigations Counsel in February, and Jeff Reynolds joined us as a Researcher in March. They have both been working, along with Samantha Mandeles, our Senior Researcher, on a variety of investigative and research projects only some of which make their way to these pages.

The Legal Insurrection website seems to be weathering the post-election fatigue fairly well. Most political media and conservative websites have seen substantial double-digit year-on-year declines. We’re down just a little (less than 10%), which in this environment is a victory.

Rather than a long post reciting all our accomplishments, we prepared Legal Insurrection Foundation Overview — April 2021:

Being “disrupters” is what we do best, and that’s going to intensify. We’re looking forward to our terrible twos. Please join us.

From our Legal Insurrection family to yours, thank you.

Of course, this is now 2021, so we never know what the rules will be by the end of the year, but, if you donate to the professor, you MAY get a benefit this time next year.

Honestly, this is a good cause, so who cares about the tax benefits…. just do it!