Burnt Out Portland Police Officers Are Fleeing the City in Droves

Burnt Out Portland Police Officers Are Fleeing the City in Droves

“The city council are raging idiots, in addition to being stupid. Additionally, the mayor and council ignore actual facts on crime and policing in favor of radical leftist and anarchist fantasy.” 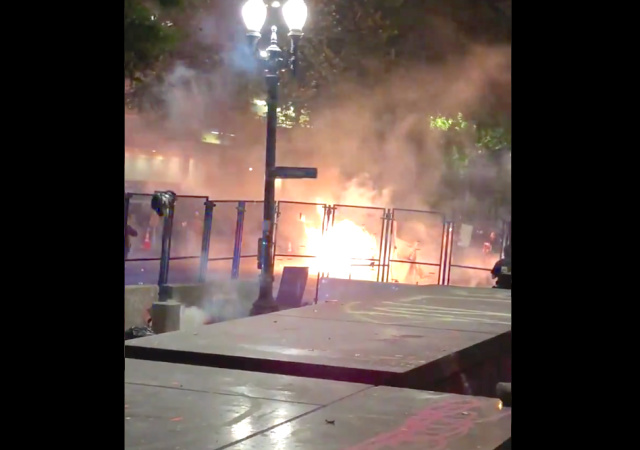 The radical left has been rioting in Portland, Oregon on a nearly nightly basis since last spring. Now some police officers in the city are heading for the exits.

Who can blame them?

Police in Portland get little to no support from the mayor’s office and the city’s prosecutors release almost anyone who is arrested for rioting overnight.

Late last year, Portland’s police department said it received an “unprecedented” number of officers leaving their jobs midcareer to take lower-paying jobs elsewhere — and on Sunday the city’s main newspaper published an article offering a glimpse into the reasons why many decided to leave.

The Oregonian reported that a total of 115 officers have left the department since July 1, 2020, representing “one of the biggest waves of departures in recent memory.”

The paper said it reviewed 31 exit interview statements from these officers that showed a certain level of disillusion with the job. A retiring detective reportedly wrote in one that the community showed officers “zero support.”

“The city council are raging idiots, in addition to being stupid. Additionally, the mayor and council ignore actual facts on crime and policing in favor of radical leftist and anarchist fantasy. What’s worse is ppb command (lt. and above) is arrogantly incompetent and cowardly.”

The police union building in the city was just attacked. Again, this has been going on for months.

Dozens of people gathered outside of a Portland law enforcement union building, lit a fire, and vandalized the building early Sunday morning.

Around 40 demonstrators placed sticks and twigs near the Portland Police Association headquarters and set it ablaze, authorities said. The structure was tagged with the phrases “Land Back,” “F— 12,” and “ACAB,” which stands for “all cops are b——-,” footage taken throughout the unruly night revealed.

Officers from three different divisions arrived at the scene, and the local fire department was called to extinguish the flames. Police said some of the demonstrators were “periodically blocking vehicle traffic” during the unrest.

Just look at this:

The media don't want you knowing that far-left Antifa thugs started a fire outside a police union building in Portland. pic.twitter.com/yEbapGA1zJ

Conservative commentator John Cardillo, who is former NYPD, recently spoke to Buck Sexton about this and laid blame at the feet of Democrats who he suggests have become pro-criminal.

If a foreign gang of thugs invaded Portland and attempted to burn and destroy on a nightly basis, would the city put up with it?

You got what you voted for.

Although bludgeoned daily with racist and anarchist propaganda, Portland residents have a responsibility to seek unbiased information and not be “sheeple”.

The rest of the country must stop enabling this insanity.

“You got what you voted for..”

Yes. And now that the Dems are corrupting the election process, the citizens may not be able to vote these totalitarians out of office — that is the Dem plan. Permanent one party rule – just like the CCP (a coincidence of course).

So YOU are the one responsible for Biden? We got him, so YOU must have voted for him. Don’t be a tool.

Their voters overwhelmingly voted for their city leadership, despite this nonsense having gone on for the last five years.

Yeah, Sport, they voted for it.

As we discovered with the last presidential election: It really doesn’t matter at all who or what you voted for; what matters is who counts your votes.

People get the government they deserve.

I contend that this has gone so far that the only cure will be rioters bagged and tagged.

When the Chauvin trial wraps up, there will be riots regardless the verdict.

Guilty, and the rioters will be shooting cops, burning patrol cars, and attacking precinct houses. Don’t forget the looting and the attacks on non-blacks. This will be to show “we are in charge, m……….rs!”

Not guilty: same thing except “No justice, no peace!”

All it would take to bring it to a halt is just one or two mayors giving orders to shoot arsonists and looters.

And the needed supplies are staged and ready for deployment to the “spontaneous” riots.

It would be interesting to trace back who pays for them. I will not be a right-wing parrot and say “Soros! Soros!”. I think it is Our Betters in Washington.

“…one or two mayors giving orders to shoot arsonists and looters.”

The mayors are on the same team as the “arsonists and looters”.

Arson and looting is the goal.

I say defund the police in the democrat held cities. They protect the criminal class. Let the citizens take care of the problem or leave or be subject to what they voted for.

I hope that all these officers find jobs outside of city cesspools. They, and their families , deserve better.

Then Antifa takes over the city and has a safe base for operations. This must be stopped.

Portland re-elected Wheeler; they showed where their priorities are. Let them deal with the takeover, be it militia, or James Taylor singing in Pioneer Square.

A police department is not suitable for stopping this. National Guard would be a be more appropriate, with live ammo.

Yeah, well if we try to step in we’ll just be used as a buffer for the rich leftists. I am sorry, there is nothing else to do now but to let it roll downhill until those leftists themselves start to feel the chill wind, and let them fund a solution to it. You saw what happened to people who tried to help Trump by holding the line. Even Trump didn’t cover them in many cases.

Antifa is just an idea. Who’s to say how those fires started? Certainly not the people caught on video setting them.

This is simply a reflection of the incentives involved. The pattern is mirrored across the Nation in departments and agencies who have ‘woke’ political masters imposing their policies.

IMO the base pattern is likely to be:
1. Officers eligible for retirement will almost certainly leave.
2. Officers with less than 6 years will leave. They have time to generate pension eligibility in another area without leaving too much on the table.
3. The officers within 3-5 years of retirement eligibility will likely stay but press to transfer into administrative or training roles v street beats.
4. Those officers between 6 years service and those more than 5 years from retirement eligibility must make a choice: does the potential danger in terms of physical injury or being scape goated/ sacrificed to appease a BLM/SJW mob outweigh their current salary /future pension?

Such a dystopian salad you’ve presented there, and you’re right.

Forget 1984, “A Clockwork Orange” is the blueprint here.

I just don’t understand this. Aren’t all you cops Democrats? Didn’t you all vote the the very people you’re complaining about? If you leave, where are you going to go, another Democrat city?

Very good dannystaggers. The cops in these places are almost all democrap union members that have zero concern for the citizens they “serve”. There are exceptions of course, and many of the officers are good people on an individual basis. But if you work for the democrap administration you are part of the problem.

So, defund is fine with me. The basic role of policing is to protect the criminals. Stop protecting them and they will be hunted down and eliminated like the Carolina panther.

The cops leaving to sign on with another dept. may be in for a big surprise.
What are they going to do if they have to do actual police work?
They spent most of their time in Portland running away.

Will the last law abiding citizen to leave Portland please bring the flag.

Ham-handed liberals are doing all they can to destroy this country. They have no plan but to destroy. Otherwise, they just make it up as they go along. See Alcee Hastings.