Brandon Elliot allegedly told the woman she “doesn’t belong here” as he kicked her to the ground. 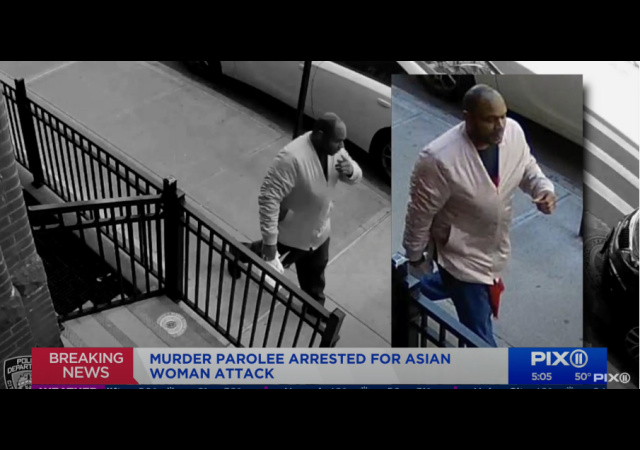 The NYPD arrested Brandon Elliot in connection to the brutal assault of a 65-year-old Asian woman.

Brandon Elliot, a parolee out on supervised release, has been arrested & charged w/ this brutal assault.

Great work by your @NYPDDetectives, identifying & apprehending the assailant, all within 48 hrs — always seeking justice for victims. https://t.co/NVdIO8WVhD

The attack took place at noon on Monday. Elliot allegedly kicked the woman to the ground and shouted anti-Asian sentiments to her.

The victim has “a fractured pelvis and contusion to the head.”

Investigators say Elliot is the man seen punching and kicking the victim in a video that has made national headlines.

Elliot was identified by residents as a local homeless person, and multiple Crimestoppers tips directed police to a hotel serving as a homeless shelter on West 40th Street.

He was charged with assault and attempted assault as a hate crime and will be arraigned later today.

Elliot has a long police record. He was arrested in July 2002 for fatally stabbing his mother when he was 19 in the Bronx.

After serving 17 years in state prison, he was released on lifetime parole in November 2019.

so this should be the end of his parole

He probably adapted to prison life just fine and wanted to back to his friends in the joint. Free food, free lodging, no work requirements.
I hope his new roommates are all Asian Americans, but won’t happen because there probably aren’t enough Asians incarcerated.

Where is his MAGA hat?

Anyone surprised? Glad they caught him, lock him up!

I don’t expect justice will be done otherwise there will be riots. My prediction is news will bury the story and NYC will release him when no one is paying attention. So sad these days.

If that becomes a regular occurrence, I predict “street justice ” will make a come-back.

After his arraignment, will he be released on no bail, as is NYC policy now, or will the fact that he’s on parole change that?

I take some comfort in the fact that tipsters ratted this guy out. But only a tiny bit.

Never understood that one. If you feel the need to watch him the rest of his life why not just keep him in prison?

The same 6% of the population commits >56% of the violent crime (FBI stats). Why is that?

I heard a press conference where the DA or police rep. stated that he would be charged with a Hate Crime, is this the first minority on minority hate crime? I do not believe I have ever heard of that before.

Given the millions of illegal immigrants flooding over our borders, taking jobs historically held by blacks, depressing black wages, and crushing them with unemployment, you’d think that a hispanic would be a more rational target for “you don’t belong here” than an elderly Asian woman.