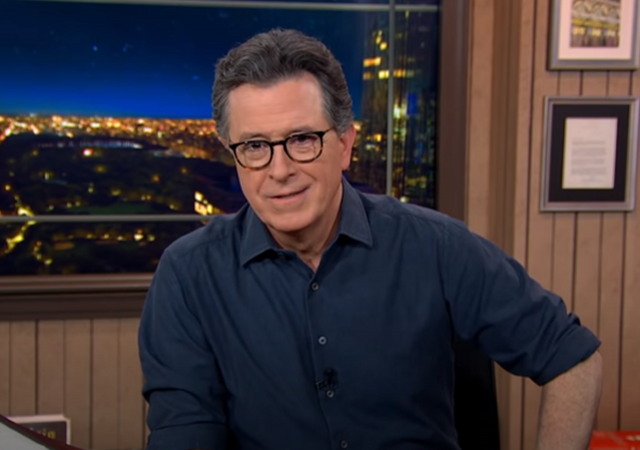 Late night entertainment shows aren’t what they used to be. Over the last four years, we saw the complete politicization of these programs. They are all pro-Democrat, anti-Trump, and anti-Republican.

Now they are basically being used to push policy, too.

Chuck Schumer was on the Late Show with Stephen Colbert this week. In the clip below, Colbert pushes the ridiculous left-wing idea that the United States Senate is flawed because states like Wyoming have the same number of senators as states like New York. He also claims that the filibuster is flawed. All of this is set up before Schumer even speaks.

President Biden’s unexpected endorsement of making senators earn their filibusters has been a shot of adrenaline to the progressive push to reform the Senate’s de facto 60-vote threshold for passing any legislation. Stephen Colbert asked Senate Majority Leader Chuck Schumer (D-N.Y.) about that on Thursday’s Late Show.

.@SenSchumer discusses the future of the filibuster. #LSSC pic.twitter.com/bIRuhqhtYY

Yes, this is what people want when they watch late night talk shows: discussions with Chuck Schumer about the filibuster https://t.co/5qIxA51txU

Over on Late Night with Seth Meyers, same thing. Meyers even goes on to accuse Republicans of trying to steal elections and suppressing voters, in addition to pushing the idea of nuking the filibuster.

“Senate Minority Leader Mitch McConnell has promised a ‘scorched earth Senate’ if Democrats change the filibuster to pass sweeping and urgently needed democracy reforms as Republicans across the country unleash a tidal wave of draconian new voting restrictions,” Meyers wailed as began his uninterrupted partisan tantrum. He then proceeded to bitterly complain that America’s constitutional system of checks and balances was unfair to Democrats:

Our democracy as currently constituted, is simply, not a level playing field. In fact, it’s arguably never been a level playing field, it’s heavily tilted toward a minority of voters that are predominately white and rural, thanks in large part to anti-majoritarian institutions like the Electoral College and the Senate. Just consider that right now the Senate is evenly split 50/50 and yet the 50 Senate Democrats represent nearly 42 million more Americans than the 50 senate Republicans….I mean, just consider the scope of how heavily tilted our democratic institutions are toward Republicans. They’ve only won the popular vote once in the last 32 years, yet, they’ve appointed a majority of Supreme Court justices…

This is not entertainment programming. It’s 100 percent Democrat party activism.

Wait! These guys are comics? I thought comics were supposed to be funny!

They’re emulating the democrat female comic bar for comedy: which is none.

Most of broadcast TV, news and so called comedy has been unwatchable ever since the 2016 election. Such obvious bias makes their drivel an insult

I can think of a whole bunch of things that are more pressing than watching whatever “this” is. Belly-button lint maintenance springs to mind right now.

At least Seth Meyers had the decency to admit that the Democrats rigged the 2020 election and the runoff. The other “late night hosts” (aka Demo-Socialist talking heads) can only demean President Trump while propping up Chinaden, Piglousy, Shoomurky, and the other leading Socialist Commies (including Kommie Kammie). Since Johnny Carson retired, there hasn’t been a late nighter that could get the job done. Carson was humorous. The ones since are annoying political hacks. Carson had great ratings. Those since couldn’t hand with Here’s Johnny if you combined their audiences!! Paid programming is better than these clowns!

Paraphrasing anti-war leftists: What if they had a Senate, but no Republicans came?

Colbett is simply not funny. At least bill mahr is.

Mahr is actually a skilled comic – with a natural talent for humor. Colbert smiles like an idiot, talks a lot, acts like a fool – but never generates a laugh.

He’s about as funny as the current crop of female ‘comedians’ who are nothing more than crude mouthpieces of the left.

Funny is funny. Colbert just doesn’t have it.

Idiots don’t even consider that much of the land in the mid west or west of the mississippi will never be populated because it is owned by the feds or is used to feed those who live in the east coast cities.

Mallard Fillmore. Do they still run that anywhere?

And that is a snapshot of the problem. Republicans can put out all the press releases they want and do all the interviews they want, but in the end, unless it’s an issue that is mightily unpopular, they might as well be shouting into the wind.

The filibuster precedent in relation to the Senate’s cloture rule (aka. the filibuster) is going to be changed. It’s not a matter of if, but when. And the when will probably be sooner rather than later.

Bitch McConnell could have demanded that the filibuster be protected as part of the power sharing agreement for a tied Senate.

Schumer said no, and Bitch McConnell caved in return for a worthless statement from Manchin and Sinema that ‘at this time’ they wouldn’t support removing it.

Bitch McConnell KNEW they were going to remove it, and he knew he had the power to protect it, and he didn’t care.

You are wrong. McConnell did demand it. He fought hard for it. But Schumer wouldn’t budge, so in the end what could he do? If he’d kept fighting for it Schumer would have ended up saying “Screw you, if that’s your position then we won’t share power with you, we’ll keep it all for ourselves”. And then what would he have been left with? Manchin’s and Synema’s promise to protect the filibuster left McConnell able to negotiate other concessions instead, things Schumer was willing to give him. But the bottom line is that Schumer was holding a winning hand so McConnell couldn’t force him to do anything.

How many times have the “progress”ives had the “do you want your children to remain healthy?” conversation with those we thought would stand up to them? This would explain many things, including the changes in point of view of our newest Supreme Court justices. Coercion and extortion are the names of the game.
.