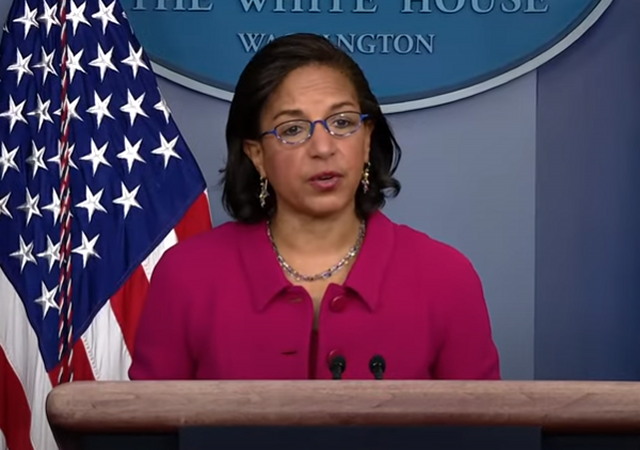 Biden signed an executive order in March that put Rice, now the assistant to the president for domestic policy, in charge of soliciting strategies from federal agencies to produce “relevant information” on expanded voting registration procedures. Federal agencies must submit to Rice “a strategic plan outlining the ways identified under this review that the agency can promote voter registration and voter participation” within 200 days under the terms of the order.

“Agencies shall consider ways to expand citizens’ opportunities to register to vote and to obtain information about, and participate in, the electoral process,” the order states. “The head of each agency shall evaluate ways in which the agency can, as appropriate and consistent with applicable law, promote voter registration and voter participation.”

This is the most telling passage:

It requires agencies to distribute registration and vote-by-mail ballot application forms, as well as to assist any applicants in completing the forms. It also pushes agencies to allow “approved, nonpartisan third-party organizations and State officials to provide voter registration services on agency premises.”

Democrats had great success with mail-in voting in the 2020 election. Naturally, they’re trying to expand their efforts. And like all Democrat initiatives, anyone who objects will be accused of racism.

We shouldn’t be surprised by any of this. Rice started laying the groundwork for this effort right after joining the Biden administration. This Reuters report is from January 26th:

White House adviser Susan Rice said on Tuesday voting rights are a “real concern” and the United States should expand access to the ballot.

Rice also said the White House would work with Congress on legislation to address voting rights and that she expects President Joe Biden to address the matter later in the day.

“It’s a matter of real concern because we ought to be in the business of encouraging and enabling all Americans who are eligible to vote, to be able to vote,” Rice told a White House briefing.

We’re not even playing the same game.

So, Susan Rice is in charge of cheating in elections. Sounds about right.

“Experienced liar with no conscience” said the job posting.

Susan Rice is another ugly, inside and out.

If you expect this to end well, raise your hand.

Who’s willing to bet she won’t resurrect Obama’s “Secret Research Project” to collect the names of those who don’t vote the “right way” and doxx them to Democrat party’s Black Shirts?

Can the states nullify her efforts? How can the states stop those applications from being mailed out? Sue her and Biden in the courts?

We’re not even playing the same game.”

That’s why the GOP is the wrong party at this time in history: perfectly analogous to boehner as Squeaker of the House when obama was wrecking the nation.

The GOP is dead. We need a third party. It’s not like the GOP is going to win

The Democrats know they are in a war and are moving on many fronts all at the same time – rigged “elections”, border infiltrations, silenced “enemy” communications, false flags, propaganda, disarming the citizens, corrupt courts, surveillance, and more. And, we are not even 90 days into this fake POTUS.

And if those don’t work, ending the filibuster, statehood for DC and PR (and maybe Guam) and packing the Supreme Court.

I think it makes eminently good sense to reconfigure the Federal enclave to encompass the Federal government buildings in DC and turn the rest of the District back to Maryland. Ends the claims that DC residents are taxed without representation in one swell foop. And the Socialist/Communist Party will scream because they get one more Representative but no more Senators.

That makes way too much sense. Dems won’t do anything that gives an inch in a sensible resolution. Instead, they will throw every ism in the book at you or, at best, want to annex it into Virginia to turn it from deep purple to permablue.

Why not just put Bernie Madoff in charge of the Federal Reserve and be done with it?