Sorry, AP and CBS News, these children are in Biden’s custody, the Border Patrol buck stops with him. 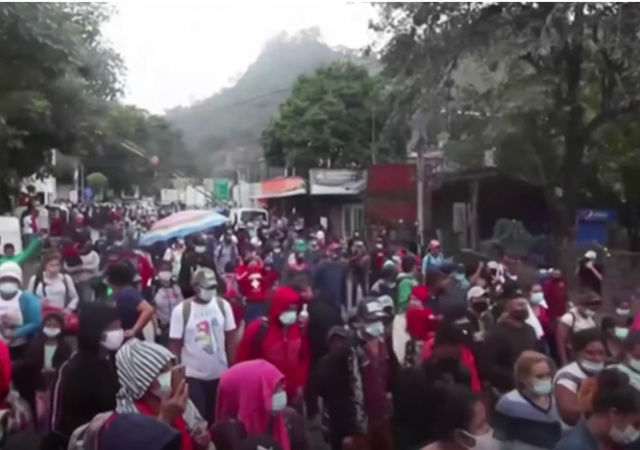 As the Biden administration settles into its open borders policies, even the media is starting to notice that conditions are not good for those, particularly children, crammed into substandard facilities, often with no Wuhan coronavirus testing or social distancing, masking measures. The CDC even “bent” its rules on COVID so that Biden could place as many illegals into detention facilities as possible.

As we noted, the Biden administration is also releasing illegal aliens into America who are testing positive for COVID. But Americans who have been subjected to tyrannical lockdowns and mask mandates “may” be able to gather in small family gatherings in time for July 4th. Wrap your mind around the crazy.

Needless to say, we aren’t being treated to “Biden hates brown people and wants them to die” and “Biden is a xenophobe/RAAACIST’ narratives we endured when President Trump utilized the Obama-Biden era facilities for “caging” children while obtaining agreements with Central American governments to minimize the number of children (and other illegals) allowed to illegally cross our borders.

It is rather interesting to see the legacy media publish stories about what is happening at the border . . . and how they shift blame from the president to the Border Patrol (an executive branch agency that answers to the president).

Take the AP, for example, in their article entitled, “Children packed into Border Patrol tent for days on end, ” the blame is clearly on Border Patrol.  Not on the president who proudly penned executive orders that resulted in this travesty.  (Archive link)

Hundreds of immigrant children and teenagers have been detained at a Border Patrol tent facility in packed conditions, with some sleeping on the floor because there aren’t enough mats, according to nonprofit lawyers who conduct oversight of immigrant detention centers.

The lawyers interviewed more than a dozen children Thursday in Donna, Texas, where the Border Patrol is holding more than 1,000 people. Some of the youths told the lawyers they had been at the facility for a week or longer, despite the agency’s three-day limit for detaining children. Many said they haven’t been allowed to phone their parents or other relatives who may be wondering where they are.

Despite concerns about the coronavirus, the children are kept so closely together that they can touch the person next to them, the lawyers said. Some have to wait five days or more to shower, and there isn’t always soap available, just shampoo, according to the lawyers.

This is not some rogue agency flouting the president’s orders; this is an executive branch agency doing exactly what the president ordered.

Even the AP is forced to acknowledge that Biden’s administration is behaving even worse than that dreaded Orange Man Bad.

“It is pretty surprising that the administration talks about the importance of transparency and then won’t let the attorneys for children set eyes on where they’re staying,” said Leecia Welch of the National Center for Youth Law, one of the lawyers. “I find that very disappointing.”

The Biden administration’s lack of transparency is hardly “pretty surprising,” it’s par for the leftist course and given his administration’s dominance by Obama hold-overs and assorted communists and anti-capitalist, anti-American lunatics, it’s pretty much expected.

CBS News takes the same angle (“unexpectedly”) and places the blame on the Border Patrol.

In their article entitled, “‘They never saw the sun’: Lawyers describe overcrowded conditions for children in Border Patrol custody,” CBS News, like the AP, pretend that the Border Patrol are not part of Biden’s executive branch. (Archive link)

A “staggering number” of migrant children detained at a Border Patrol facility in south Texas face overcrowded conditions, with some held for as long as seven days, lawyers who interviewed them on Thursday told CBS News.

Neha Desai, a lawyer representing migrant youth in U.S. government custody, said she interviewed children who said they were hungry, as well as minors who only showered once in seven days.

“Some of the boys said that conditions were so overcrowded that they had to take turns sleeping on the floor,” Desai added, citing interviews with nearly a dozen unaccompanied migrant children held at the Customs and Border Protection (CBP) holding facility in Donna, Texas.

Let’s get in that shot at Trump, though, the one that totally ignores the huge influx of illegals Biden has invited across our border . . . and into his increasingly crowded, dangerous, dehumanizing detention facilities.

The minors Desai spoke to also said they had been denied phone calls to communicate with family members. “They were hysterically crying, wanting to talk to their family,” she said.

“We appreciate the extraordinary challenge that the government faces in undoing the damage of the prior administration’s immigration policies,” Desai said. “That said, it is deeply concerning to see young children in facilities for days on end, unable to take a shower, call their families or see the sunlight.”

Sorry, AP and CBS News, these children are in Biden’s custody, the Border Patrol buck stops with him.

Leftists can’t replace the citizens fast enough, or overwelm the system fast enough to make it collapse.
Its their baby and its what they want.

Until liberals are willing to open their eyes and confront the media propaganda the media will continue wo mislead. Sadly, my own brother has bought into the Marxist Media narrative. When I point out the falsehoods and hypocrisy – he says I am “just spouting right-wing talking points”. I tell him that TRUTH and TACTS are not right-wing or left-wing. I get it. I used to be a liberal. I was in the liberal bubble for the first 40 years of my life. It is REALLY hard to admit to yourself that you have been wrong. That you allowed yourself to be fooled for so long. That you unknowingly looked at the world with a media-induced filter. It’s a bitter pill.

In fact, I believe people resist an objective view of facts and clear thinking to avoid having to admit that they’ve actually been fooled for so long. In addition, the Marrxist Media do a superb job of shaming those who don’t fall in line. They brand anyone with a right-leaning view as racist. They constantly message that you’re virtuous is you are a liberal and demonize the right. Yes, it is propaganda of the highest order.

On a larger scale – The way you kill a democracy is by limiting people’s information so that they are sure to vote in the way the tyrants want. In such a situation – what you really have is just a pretend democracy..

How could the influx of millions of new illegal Democrat voters possibly be seen as a crisis?

As the USMC would say, “Move forward of be left behind, Boomer!” (or something close to that).

Border Patrol’s job now is not to stop illegal border crossings, but purely to service them after they cross the border. The service is inadequate, blame the BP!

They should all quit, but they like their nice govvy paychecks. Rather than providing service to illegals, it would be better if they had to fend for themselves. That might deter some of them and cost us a lot less.

I doubt that most ICE officers like what is happening.

Remember those “children in cages” photos that resulted from the Obama era policies? Remember how they were used to demonize Trump in a sleazy Ministry of Truth move worthy of Orwell?

Why I should believe these leftist lawyers and the Joseph Goebbels media now when they have a long history of blatant in-your-face lying? Did they have a sudden attack of decency and integrity?

You would think that moron AOC would be down there raising holy hell over this, but no. I guess one fake photo-op was enough for her. Damn hypocrite.

Here’s a proposal – Let’s change the rules so that we ensure that 70% of all immigrants are whites that come from England, Scotland and Ireland.

Oh, you think that such a policy would be racist? We’ll then, what do you call a policy that for 30 years has resulted in nearly 70% of immigrants coming from Mexico, El Salvador, Honduras and Guatemala?

If you’re fine with the policy that favors hispanics that come from a few central american countries, then you are a racist.

The fact that this has been happening for 30+ years shows that it is an institutionalized, systemic bias that favors hispanic immigrants from that area and thereby disfavors all those other immingrants from Asia, Africa, Europe and Mideast who have to wait in line and follow the rules.

The lies and hypocrisy of the Progressive-left and the media on this point is so extreme. To a point that it obvious that their view is that racism is fine with them – just so long as it may result in more votes for their Party and deeper and longer control and political power.

Both parties are a problem – but of the two, the Dem Party is the one that has shown itself willing to promote policies that hurt the interests of most Americans. And to divide Americans with identity politics.

It’s become clear that the Party is a cult. The ideologues love the Party more than they love America. They are willing to destroy this country, our culture and our way of life – for power. I worry for our country’s future when I hear Cuban and Venezuelan refugees say they are terrified that the US is headed down the slippery slope that resulted in communists running their country.

If Biden (or his overlords) had done nothing on the Southern border, then you could blame Trump, but he (they) changed the entire playing field, so he (they) own the travesties that came along with their decisions.

Funny, though, it doesn’t work the other way around. With Covid, Biden is pretty much riding on Trump’s coat tails. He really hasn’t made any sweeping changes or even many tweaks. Yet he reaps all the credit, since it is a resounding success.