Anyone who thinks today was just another negative news cycle is deluding themselves. 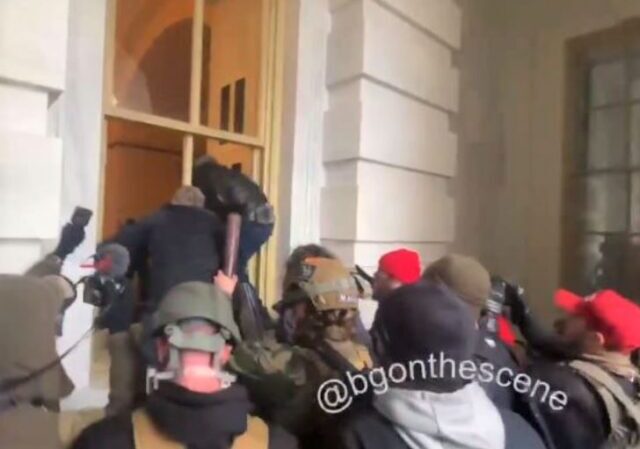 It’s often hard to understand the impact an event will have in the future when you are going through it in real time or soon after.

Today’s storming of the Capitol, including rioting, is one of those real-time events about which I’m comfortable reaching some conclusions.

The first and most obvious conclusion is that while peaceful protests outside the Capitol are appropriate, fighting with Capitol Police outside, breaking into the building in a violent and menacing manner, fighting with police inside, and then proceeding towards and into the House and Senate chambers requiring evacuation of representatives and Senators is not acceptable. A woman being shot dead by police, while not inevitable, was a consequence. It’s even more unacceptable when Congress is performing a constitutional duty to open and count electoral votes.

The fact that we have seen violent conduct from the left in recent years also directed at key institutions does not excuse it. Yes, among many other events, we saw anti-Scott Walker protesters take over the Wisconsin statehouse and menace lawmakers, and Antifa/BLM assault federal courthouses and turn sections of cities into war zones. And yes, Democrats and the media excused such violence, and there is a double standard as there always is where pro-Trump “mostly peaceful” protests are not given the same consideration as mostly violent leftist protests. And yes, it’s possible (but not clear) that some of the violent rioters were outside agitators. Politics is not fair, and it’s never been more unfair than how Trump supporters are treated by the media.

But there was something uniquely offensive to our form of government to have such violence directed at the U.S. Capitol on such a constitutionally meaningful day.

Which leads me to the second point about which I am confident. Today has forever changed the trajectory of the Trump movement.

Donald Trump created a movement that brought tens of millions of people forgotten by politics into the system, which brought electoral victory to a Republican Party that had become used to losing to the Obama-coalition, which brought so much progress and accomplishments to the economy and foreign relations. He brought into the movement an unprecedented multiracial and multiethnic coalition united not by skin color but by love of country.

That movement was embodied in Trump, a unique figure, who had all the obvious personality perculiarities that allowed him to withstand a withering attempt to sabotage his administration and him personally. For four years Trump kept things under control, with Twitter as his vent — he didn’t start wars, didn’t sic the FBI and IRS on political opponents, didn’t do any of the truly repressive things his predecessors did. If not for the relentless attempts to undermine his presidency, his term may have been fairly boring.

Yet things have not been kept under control since election day, and particularly in the past 2-3 weeks. I think a lot of his supporters would acknowledge that.

I had no problem with litigating election disputes, even if some of those disputes were suspect. Let the court process run its course, I advocated. But once that process had run out, and not a single judge, not even Trump appointed judges, upheld any challenges, it was time to move onto more productive action. I advocated on December 14, moving towards building a resistance movement, not engaging in futile and stupid actions that had zero or close to zero chance of success, such as proposing alternative electoral votes.

But that’s not what happened, instead unreliable commentators picked up on the notion that Mike Pence could just reject electoral votes, something completely contrary to the plain wording of the Constitution. Neither Pence, nor even any of the Republican Senators willing to challenge the result through the congressional statutory process, took the position that Pence had such power. Yet that notion became an obsession, so much so that even today Trump in his rally speech was demanding Pence take such action.

Anyone who thinks today was just another negative news cycle is deluding themselves just as people were deluded into thinking grand conspiracy theories or Pence could act as kingmaker deluded themselves. Today was different.

The issue will be whether the Trump coalition can hold together, and who can hold it together. Should Trump choose to be that leader, he will retain his core base, there are a lot of Trump supporters — maybe even the majority — for whom it’s just become too much now. It can’t continue the way it was, there has to be some new way of making an American-economy-first, worker-first, capitalism-and-liberty-first coalition stay together.  It may be that there is no one other than Trump who can hold the coalition together, but if that’s the case, then the coalition will break apart because the center cannot hold after today.

The Trump movement as we knew it ended today, though it may not have ended for good. That’s a reality we can see even in real time.

Sometimes the future brings what the past shunned. The difference now is; never has any nation been as drugged as America – old-legal, newly-legal, & still-illegal hallucinogenics. No one can think straight anymore. Without the possibility of pain you don’t know where in reality you are. Soon there is no reality.